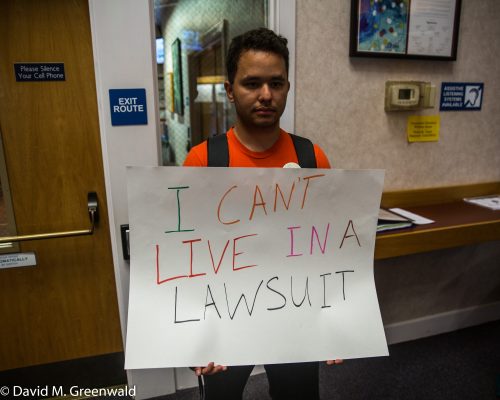 In the next few weeks we are expecting the full report from the UC Davis Affordable Housing Task Force to be released, with a response from UC Davis’ administration and recommendations for moving forward.  The preliminary data entered the discussion of Davis Live Apartments back in July and showed a significant number of students living without permanent housing at times, and in housing insecurity in general.

In the meantime, the city of Davis has approved over 3000 beds at Lincoln40 and Nishi, but those projects are being held up by litigation.

The litigation itself has many costs.  The first cost is that it is preventing the city from building additional approved housing.  Given it would probably take Lincoln40 and Nishi about two years to build and open the sites, we can assume that instead of opening for the fall of 2020, we are looking at 2021 if not 2022 for the opening.

As we have noted previously, the university is pushing forward with its plan for additional student housing.  But it is also looking like 2021, if not 2022, for likely opening dates there as well.

The bottom line: student housing is in high demand right now, we have data on homelessness, data on housing insecurity, and data on more students cramming into existing facilities.  Help is on the way, but it appears to be three to four years off rather than two years off.

Of course, the firm litigating all of these suits is Sacramento law firm Soluri Meserve.  Why they have gotten involved in Lincoln40 and Nishi is not known.  Local resident Susan Rainier appears to

have filed these suits.  In addition, Colin Walsh’s name appears in the filing papers on Nishi.

The Soluri Meserve firm is also behind letters that appear to be setting up another potential suit at Davis Live apartments.  The project would provide housing for at least 440 students if approved on Tuesday.

Their target is city decisions to exempt it from further CEQA (California Environmental Quality Act) review.

In a letter dated July 25, they write that “in apparent recognition of the fatal flaws with the Project’s previously-claimed CEQA exemption, staff and the applicant now contend the Project qualifies for a completely different CEQA exemption, the ‘infill’ project exemption.”

Staff had previously argued that it was exempt under a “Sustainable Communities Projects.”

But here is the thing: the project is an infill project.  The site contained student housing, albeit at a lower density.  The project has a relatively low number of parking spaces and will openly discourage vehicles stored on site.  So what level of CEQA review is needed for such a project?

In their letter, Soluri Meserve concludes that “a need for housing does not excuse meaningful environmental review, nor can it override the several fatal problems with this proposed Project.”

The cost of this litigation is substantial in a variety of ways.  We have already discussed cost delays.  There is also the cost of fighting the litigation, which has more and more become part of the cost of developing housing in Davis.

But the third way is that the city is forced to push developers to do full EIRs (Environmental Impact Reports) at great additional cost.

This was a point made by Robb Davis at the March 13 meeting, where the council unanimously supported the passage of Lincoln40.

Mayor Robb Davis noted that the city wasn’t even required to submit an EIR for the Lincoln40 project, because as a TPP (Transit Priority Project) it was exempt from the need to do an EIR.  The city however, in an abundance of caution, went the extra mile to do an EIR on the project, hoping to avoid litigation.

Despite these efforts, the city received notice less than a month later that they were being sued, again by Susan Rainier.

Soluri Meserve, again representing her, writes, “Petitioner Susan Rainier intends to file a Verified Petition for Writ of Mandate (the ‘Petition’) under the provisions of the California Environmental Quality Act., Public Resources Code section 21000 et seq. (‘CEQA’), against the City of Davis (‘City’).”

As Mayor Davis pointed out at the time, the litigation comes with a cost to the community itself.

The mayor explained, “I think that gets to this council’s willingness to be transparent and staff’s desire to be transparent. I think those are important qualities but they do add costs that mean that we can’t do other things.”

He said, “I think we need to consider the burden that we place on any project and what it means. It bothered me a little bit over the weekend.

“As a disclosure document it’s something that we can be proud of,” he added. “But does it really serve our community when we’re not required to – and it adds costs that otherwise could be going into a few extra beds.”

The threat by Soluri Meserve at the planning commission clearly elicited anger from some of the commissioners, including some who would fall into the slow growth camp.

As Greg Rowe retorted, “I can’t help but saying, Mr. Soluri please stop. You’re becoming a nuisance. I think he’s becoming sort of like the CEQA version of an ambulance chaser. He’s interfering with projects in the city that have been approved by the voters. So if you’re watching, please go back to Sacramento and leave us alone.”

Stephen Mikesell also took exception to the notion that city staff was using 11th hour tactics “when we’ve got letters coming in before the meeting.” He said, “So I guess one has to know 11th hour tactics, to identify them.”

Mr. Rowe also made an interesting comment on the Vanguard in general about the litigation: “If the Planning Commission had not regarded the EIRs for the referenced housing projects as meeting CEQA legal requirements, it is highly unlikely that those EIRS would have been recommended to the City Council for certification. It is my understanding that the City has yet to be unsuccessful in defending the adequacy and completeness of a project EIR.”

The question left to ponder at this point – is this community to be held hostage by single litigants and out-of-town law firms with deep enough pockets to carry these suits against most projects?

Right now we have seen litigation against the following projects in recent years: Nishi 1.0, the Marriott, Hyatt House, the Hotel-Conference Center on Richards, Lincoln40, Trackside and Nishi 2.0.  That’s seven lawsuits.  If one is filed against Davis Live housing that would be eight.

And to what end?  What benefit has the community gained from any of these suits?  Has it improved planning or made it worse?  One thing that is clear, for several thousand students who are forced to live longer in housing insecure conditions due to the litigation, these actions have had a detrimental impact on their quality of live.