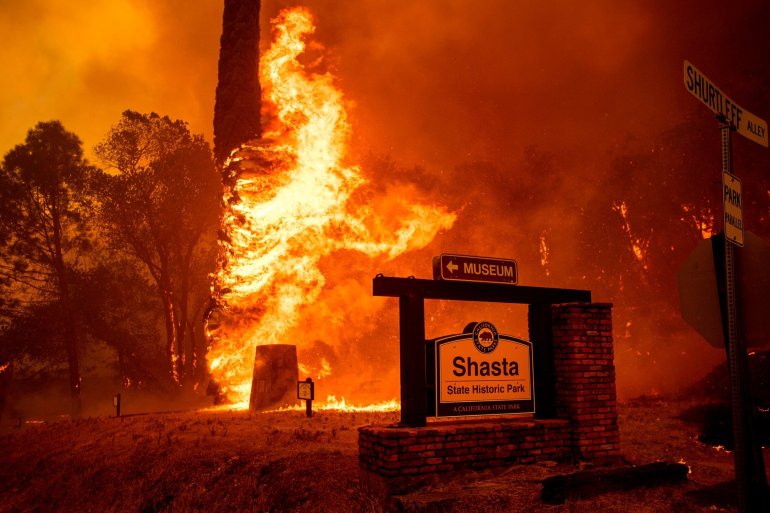 Last week I was visiting my folks in San Luis Obispo.  After finishing the Vanguard, I prepared for a jog from the house I grew up in, down to my old high school and back.  It was a little different hitting the hills now as opposed to when I was 23, the last time I hit them.  One morning I left and it was nice and cool, in the 50s, now all of a sudden it was like I hit a wall of heat and the temperature rose like 20 degrees instantly.

Santa Ana.  With the heat wave hitting and the temperatures rising into the mid to upper 90s, we decided to head to the beach and allow the kids to play in the ocean.  But when we got to Avila Beach, about 10 miles away, something weird happened – it was hotter there than San Luis Obispo.

If this were just an anomaly, we could probably dismiss it as weather extremes and move on.  But, as a recent article in the NY Times demonstrated, this is happening around the globe.

Scientists with the World Weather Attribution project concluded in a study released Friday that the likelihood is that the heat wave currently baking Northern Europe is “more than two times higher today than if human activities had not altered climate.”

An op-ed by Steve Lopez this week in the LA Times notes that “California’s hellish summer really is a grave warning.”

He writes: “In the long, hot, smoky California summer of 2018, as we camp under ash-hued sunset skies, the scariest thought is that the future has arrived, and more intense weather extremes will continue to wreak havoc in years to come.”

Anecdotally, he noted an 81-year-old resident who told him that “summers have always been hot, but lately they seem to have been imported from Palm Springs.”  Perhaps more frightening, “Near Santa Cruz,

a winery owner told me there are fewer foggy days and more high temperatures, shrinking what have long been prime grape-growing regions.”

I found Mr. Lopez’s column interesting as he engages with readers who are climate change deniers.  He found in a recent column that the reaction falls into four categories:

There is no climate change, and I’m a stooge to have fallen for a hoax.

And lastly, if climate change is real and it’s here, what can we do about it legislatively and individually?

In response to a reader whose argument was there have already been record high days, Mr. Lopez responds: “Yes, unusually high temperatures have always existed, but scientists have now documented more frequent and intense heat waves of longer duration. Also, nighttime temperatures have increased, record highs now outnumber record lows by a 5-1 ratio and atmospheric carbon dioxide has increased from 250 parts per million to 400 parts per million, all of which has altered climates around the world.”

Then there is the reader who suggests Mr. Lopez look up the writing of “climate scientist Judith Curry, who has long attacked the views of many climate scientists as alarmist. Curry has not challenged the notion of global warming, but has questioned the causes, and whether there has been a rush to judgment.”

Mr. Santer said: “Prof. Curry has argued (and continues to argue) that: 1) climate scientists routinely ignore important uncertainties in their efforts to quantify human influences on global climate; and 2) reality is too complex for us to comprehend; we will never understand the real-world climate system.”

“In my line of research — climate fingerprinting — we routinely consider uncertainties in satellite temperature data, in model simulations of natural variability, and in model estimates of the climate response to human influences,” Mr. Santer said.

“Furthermore, we routinely look at other possible explanations for the observed changes in climate (such as changes in the Sun’s energy output and changes in volcanic activity). Uncertainty is an integral part of our work. We do not sweep it under the carpet, as Prof. Curry incorrectly asserts,” Mr. Santer said.

He added that, despite imperfect observations, it is clear “beyond any reasonable doubt” that evidence points to a “human-caused warming signal” related to greenhouse gas increases. And if we wait for more perfect data before responding, Mr. Santer warned, “humanity is in trouble.”

That is my view at this point.  Humanity is in trouble.  We are sitting around watching the world change, perhaps permanently and irreparably, and debating over cause rather than taking action.

Mr. Lopez echoes my thoughts here: “I grew up in California, lived in the Bay Area for 30 years and in Southern California for 20 more, and yes, climate variations have always existed. I can recall many extremes of dry heat and steady rain.

“But this looks and feels different. The hills are drier and more combustible, the heat is hotter and more stubborn, the fires are bigger and more frightening and I can only wonder what we’ll be passing on to my daughter and future generations.”

Mr. Santer suggested that people read “Climate Change Evidence & Causes,” a short summary that’s been neatly laid out by the Royal Society and the U.S. National Academy of Sciences.

The only real question in my mind is how bad will we allow things to get before we are allowed to act?

Share:
Tags:Climate Change
Previous : Border Officials Are Still Defending Family Separations
Next : My View: We Operate in Silos but Live in One Community

36 thoughts on “My View: Fires, Heat, the New Normal under Climate Change Sinks In”