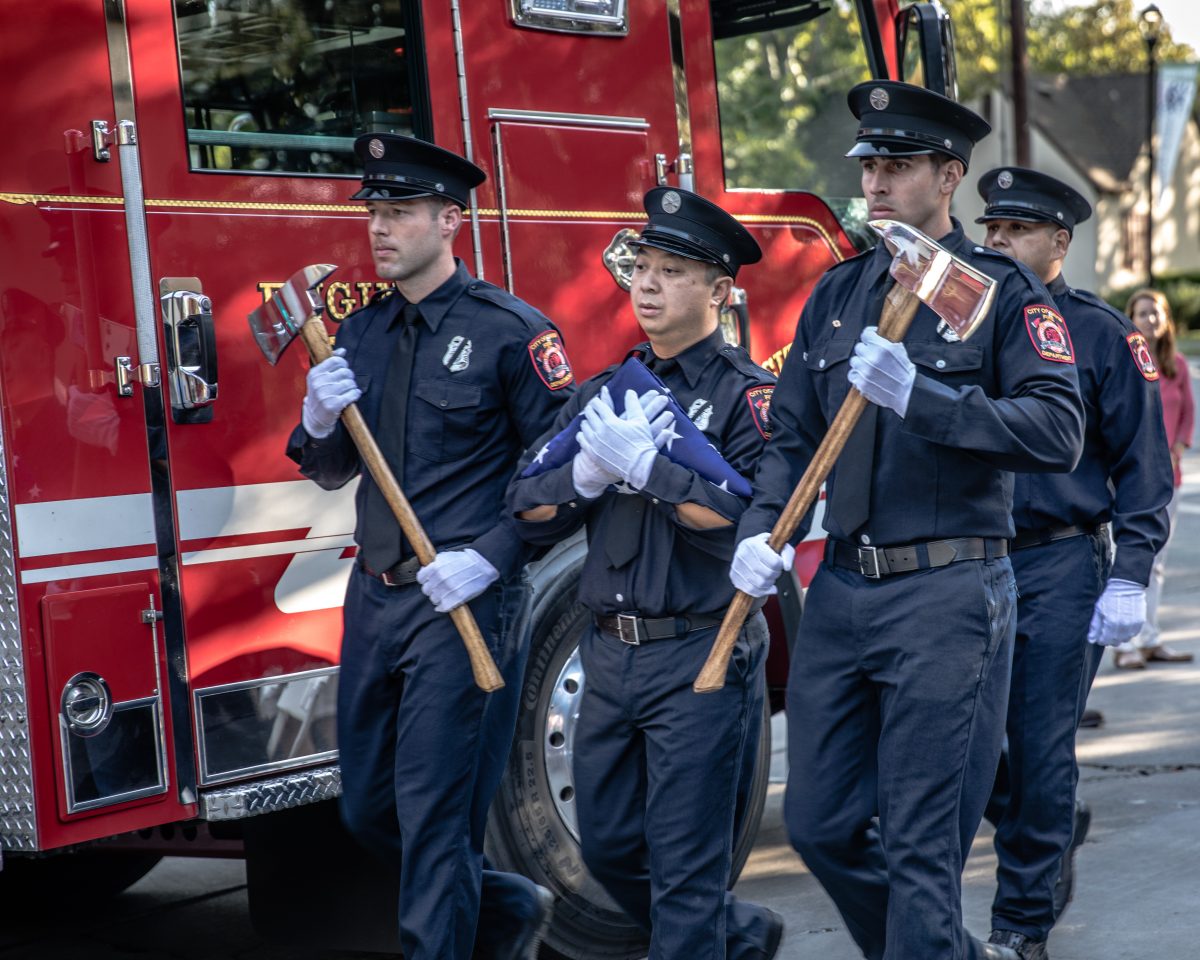 The Davis firefighters along with city officials, school district officials, and community members gathered on Tuesday morning to commemorate the 17th Anniversary of the September 11, 2001, attacks on the Twin Towers in New York and elsewhere.  In attendance included among others were four members of the Davis City Council: Mayor Brett Lee, Mayor Pro Tem Gloria Partida, and Councilmembers Lucas Frerichs and Dan Carson.

City Manager Mike Webb and Police Chief Darren Pytel were also there from the city.  Assemblymember Cecilia Aguiar-Curry was in attendance, as was former Assemblymember Mariko Yamada.  Superintendent John Bowes was there representing the school district, as was Associate Superintendent Bruce Colby and a fifth grade class from one of the elementary schools. 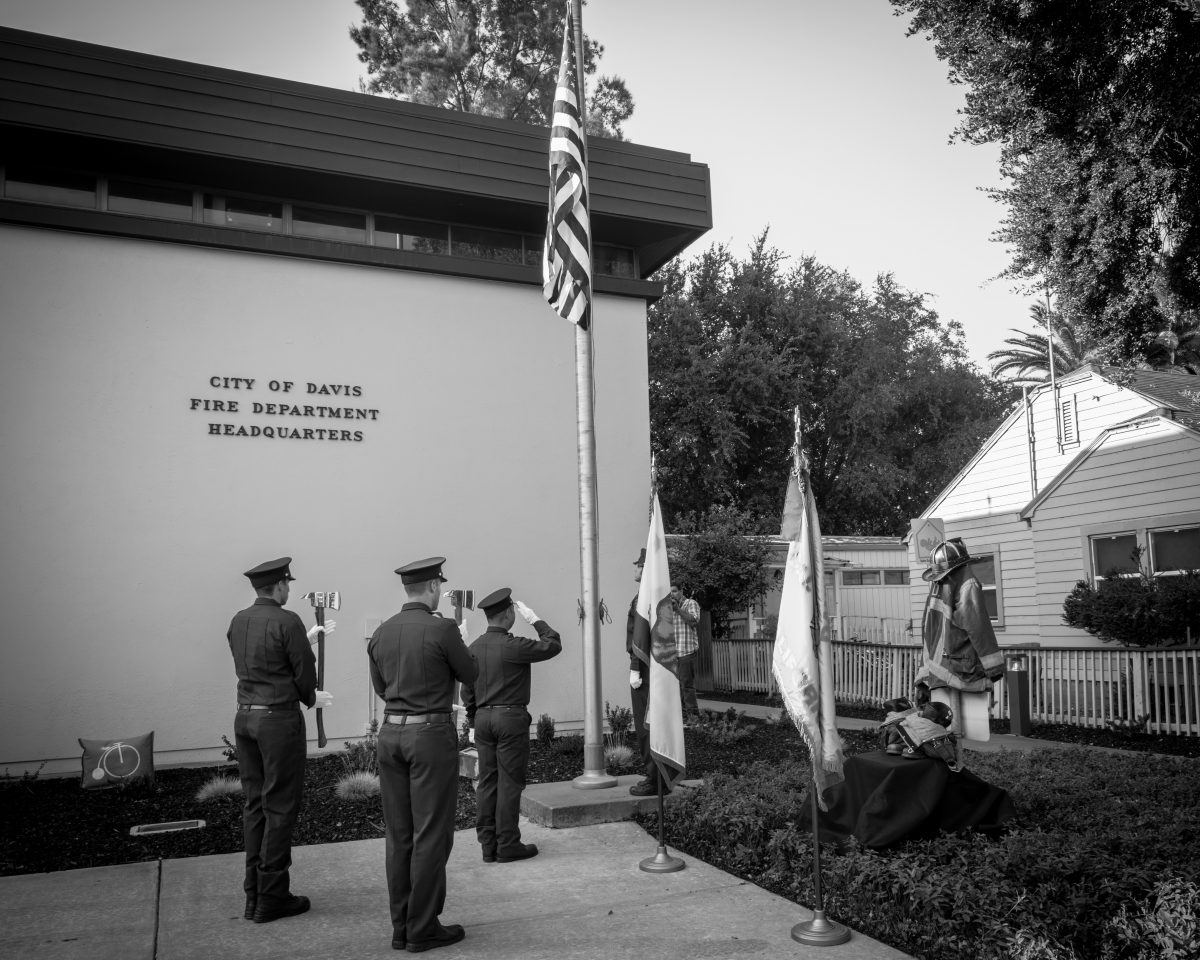 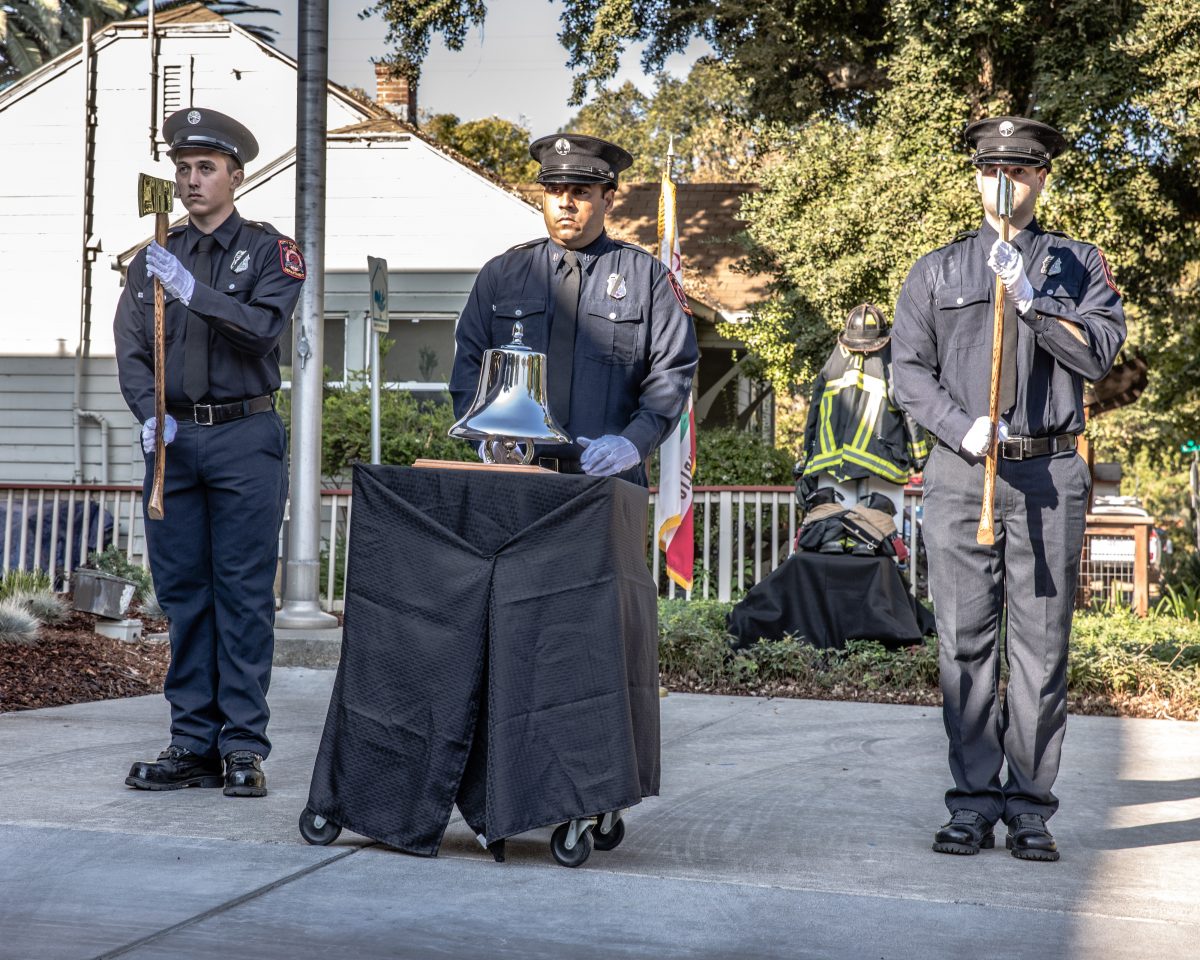 Here are the full remarks from Captain Bobby Weist…
Thank you all for joining us this morning. My name is Bobby Weist, President of Davis Firefighters Local 3494.

When you flip the pages of the calendar to September, 9/11 doesn’t look like anything special.

On the calendar, the September day that stands out the most is probably Labor Day, because a lot of us get that day off.

Of course, if you’re an American … and especially if you’re a firefighter … September 11 is a date that still brings a sting of bitter memory when we say it out loud.

On this fateful day 17 years ago, our country was attacked.

Nearly 3,000 innocent souls were lost in the World Trade Center and Pentagon. Among them, 343 firefighters, 60 police officers, 8 emergency medical technicians and 1 patrolman.

But for thousands of my brother and sister firefighters … as well as countless other emergency and rescue workers … the aftermath of that day has brought with it a new and dangerous health crisis.

For days, weeks and months after the Twin Towers collapsed, every single firefighter from FDNY on and off duty went to the site and “worked the pile.”

They dug through the rubble, hoping to find some remembrance of comrades.

Maybe a shield from their helmet, or a scuffed-up photo. Something to give themselves some closure.

Their efforts inspired us all … but now it is killing them.

To date, nearly 200 firefighters have died from illnesses linked to 9/11.

By the end of this year, it’s estimated that more people will have died from their toxic exposure since 9/11 than were killed on that horrible day.

For those of us in the fire service there are also the injuries you can’t see.

My friend Doug, a lieutenant from FDNY, happened to be on another call when the planes struck the towers.

To this day, he feels haunted by survivor’s guilt.

We know that there are many others out there who are similarly troubled.

Why them, and not me?

Why do I get to go home to my children?

As firefighters, we are coming to understand that these are the seeds of post-traumatic stress injury – P.T.S.I.

For many, P.T.S.I. remains clouded by a stigma. We’re supposed to be the strong ones. We run into buildings when others rush out.

“You can’t take it? Find another job.”

But we know better.

Those same rescue workers who carry the physical effects of 9/11 are almost certainly carrying the emotional scars.

When they were done working the pile, they went back to their home agencies and continued to see the day-to-day horrors that we as firefighters deal with.

The horrific traffic accident on the freeway.

The desperate effort to give a dying child one more breath and one more chance.

Comforting those who have lost everything and collecting their memorabilia.

These daily sacrifices leave a mark, as surely as the toxic dust from the Twin Towers is leaving physical scars.

The sacrifice for those who lost their lives while protecting others on 9/11 can never be forgotten.

The gratitude can only be paid forward by taking care of those who will continue to risk their lives while protecting others.

Have a great day.

Share:
Previous : Commentary: Getting to the Root of Davis’ Longstanding Problem with Race
Next : Why Won’t David Taormino Participate in Forums or Debates on Measure L – What Is He Afraid of or Hiding?