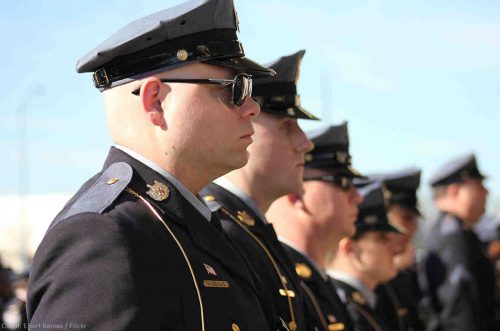 To America’s shame, there is nothing novel about police harassment and abuse of young Black men. Consequently, few should be surprised that during an early January morning in 2017, Johnny Strickland was harassed, humiliated, and abused by a group of white Detroit police officers. At least, there should be no surprise until it is learned that Strickland himself is an 11-year veteran of the Detroit Police Department.

Officer Strickland’s nightmare began when he attempted to complete an errand for his mother. The off-duty officer in civilian clothing pulled into the parking lot of a gas station market unaware that it was the scene of an investigation of an abandoned suspected hand grenade. There was nothing to indicate the site was under investigation. No barrier tape, no flashing lights, no posted guards — nothing.

As he exited his car, Strickland heard a disembodied voice shout directions to leave. He then saw a figure approaching him rapidly through the early morning fog. As the individual drew closer, Strickland recognized him as a fellow police officer.

Strickland immediately identified himself as a police officer, but the approaching sergeant responded only by saying: “I don’t give a f— who you are. … You should have left when I told you to.”

The sergeant then grabbed Strickland violently and placed him in handcuffs. Strickland pleaded in vain for the sergeant to retrieve his identification from his pocket, but Strickland was instead taken into the presence of other white officers on the scene.

Before the episode ended, Strickland endured a barrage of profanity and was called “stupid,” dumb,” and an “idiot.” He was mocked and taunted, and the handcuffs were deliberately tightened to a point where they caused physical injury. His only relief came when the sole Black officer on the scene loosened the handcuffs.

Things, however, did not get better when a supervising officer arrived.

He warned Strickland not to report his experience. When Strickland informed the supervisor of his commitment to reporting the misconduct, he was told he would suffer consequences for doing so. Adding insult to injury was an unauthorized unlawful K-9 search of Strickland’s car. Later, the threat of retaliation was fulfilled. Strickland faced several baseless disciplinary charges growing out of the incident.

Strickland’s experience was not unique.

Only 10 days earlier, Detroit’s police chief had learned about the misery of Black police officers from a report on race relations prepared by a special committee the chief had established. The report described an ongoing pattern of harassment and retaliation directed against Black police officers by white supervisory officers. The chief publicly dismissed the report and suspended the work of the committee that prepared it.

Officer Strickland is not content to allow a racially hostile work environment to continue. With the help of the ACLU of Michigan, he has filed a federal lawsuit against the city of Detroit, its police department, and several individual officers. Strickland is sticking his neck out because he feels it’s his duty.

“I filed this lawsuit because racial harassment and retaliation were directed at me, and I don’t want any other officers to have to suffer in the way that I did,” he said. “I am concerned about more than just the welfare of my fellow officers of color. After I was targeted on the street for humiliating and dangerous harassment by white officers, it became clear to me that if I, as a veteran police officer, can so easily become the victim of police misconduct, then the ordinary Black person doesn’t have a chance.”

The efforts of Officer Strickland and the ACLU of Michigan may be a step toward giving African-Americans a chance to live in a city where there is high quality, non-discriminatory law enforcement.

Mark Fancher is a staff attorney with ACLU of Michigan