In recent decades, the Supreme Court has essentially ruled that if a vote of the public is involved, a detractor is allowed to use half-truths, distortions, exaggerations and even falsehoods with no legal liability. The voters, in this case, “25,000 Davis Planning Commissioners and Vanguard readers” are left to determine what detractor’s statements are true and accurately reflect the proposal and which are not.

Their first article contained 23 misleading, distorted and exaggerated statements that fall within the protection granted by the Court. Mr. Pryor’s and Ms. Nieberg’s strategy is simple: if you throw enough “mud” against the wall maybe something “sticks” for someone.

This has been the underlying strategy in ALL previous campaigns against more Davis housing. In Mr. Pryor’s and Ms. Nieberg’s world: Ineffectual City staff, supported by largely incapable volunteer commissioners and incompetent City Council persons conspire to line the pockets of greedy developers. Who else can give “massive developers giveaways” other than the groups described above?

If you share their view of the world, don’t waste your time reading any further.

The West Davis Active Adult Community, 80% active adult / senior residential neighborhood is the first of its kind in Davis. The City staff (Planning, Public Works, City Manager, City Attorney, and the EIR Consultant) reviewed and considered economic analysis and Environmental Impact Reports on senior projects in other communities in the region. Using this research and other community’s experience they compared these studies to Davis’ historical fee data and assumptions to create a fee structure for our neighborhood that complies with State Law. It is, after all, the City’s first foray into this type of neighborhood. Page 2 of 4 September 6, 2018

Generally, comparable sized senior developments have less impacts than “typical” subdivisions, but not necessarily in every category.

We did not always agree with the City staff’s perspective. It took nearly 7 months for both sides to research, discuss and arrive at a fee schedule that was legally justified under the Civil Code and court decisions refining it. Any giveaways were on our part, not the City’s.

What Mr. Pryor and Ms. Nieberg neglected to inform the Vanguard readers about was the overall financial contributions the project provides the City and existing Davis residents in addition to the legally justifiable fees being assessed against the neighborhood.

Here is just one of 11 additional developer contributions artfully not mentioned by them:

They indicate that the City is requiring “a minimum amount of work to be done on Covell to accommodate development”. We are spending five million dollars on Covell Boulevard improvements. Most of that is to upgrade the street particularly at the Shasta/ Risling intersection which cost would otherwise be paid solely by the City. These upgrades would eventually occur regardless of our proposal, but now we’re paying for it, not Davis tax payers. Some of the five million is to accommodate the development, but only a modest portion. About a million dollars is allocated for Covell related landscape improvements which we volunteered in our original application two years ago. These funds are for the upgrade and installation of appropriate new landscaping and related improvements on the north side of Covell Boulevard from Highway 113 west to Shasta Drive along with replacing and planting median strips. We are also voluntarily installing rubberized asphalt on all the subdivision streets and paths including the Covell reconstruction. Another voluntary item included in our initial application. While it costs 25% more than regular asphalt because it includes recycled used car tires, it will last twice as long as asphalt on all other Davis streets. This results in long term maintenance savings to the City on our proposed streets for which the City will collect property taxes and fees which can then be used for asphalt repairs in other Davis neighborhoods. It’s also sustainable by using an otherwise discarded resource, used tires.

Mr. Pryor and Ms. Nieberg claim “Because seniors living in an isolated development without good access to public transportation will be more likely to use their cars (more) than others, every trip to the grocery store or other errand will require use of a motorized vehicle. Residents from a development immediately adjacent to downtown or a shopping center making a similar trip could otherwise walk or bike foregoing the use of a car.” Page 3 of 4 September 6, 2018

That claim is a distortion of the findings independent traffic engineering studies. Across the United States, studies accepted by local Traffic Engineers and Environmental Impact Report Consultants show the following. (Please notice the source.) 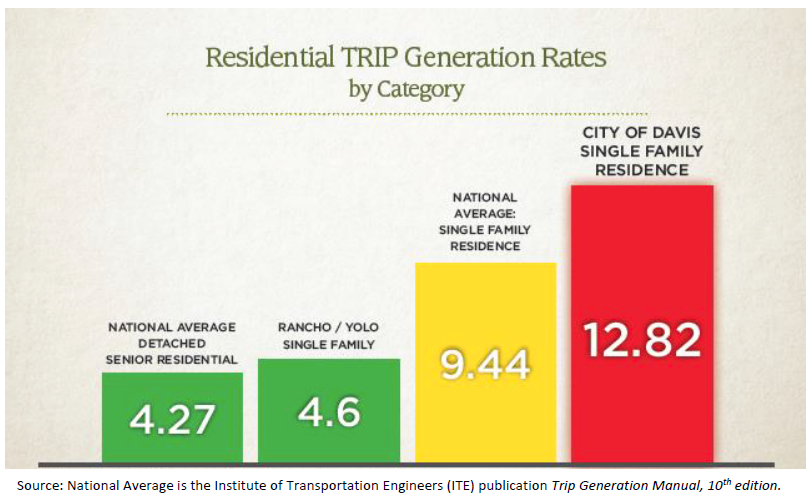 The occupants of a typical Davis single family home drive their cars three times more than will 80% of the residents that will live in the West Davis Active Adult Community. All of this data comes from independent sources not from developers. Also note, contrary to Davis based conventional wisdom, Davis homeowners drive 25% more than the national average. One could conclude we lead by pronouncements not by example.

Notwithstanding his now extensive Vanguard rantings, he remained silent at the two City Council meetings in May and June and at the times in between when he could have shared his complaints and concerns with the Council when either myself or Council persons they could have reasonably addressed them. But, not a word from him until he personally launched the No campaign. Page 4 of 4 September 6, 2018

There are so many misstatements, distortions, fabrications and nit picking in the second article by Mr. Pryor and Ms. Nieberg I’m not going to waste the reader’s time by responding to each. Together, their articles contain at least 50 distortions all protected by the United States Constitution.

Mr. Pryor’s and Ms. Nieberg’s rantings have lowered the level of discourse that Davis neighborhood planning deserves. It’s not the approach that the Yes on L team has taken for two years. We’ll stay the course: Davis, Caring for Our Own.

Anyone who would like me to respond in detail to any of their other “claims” or any other information may contact me at dave@taormino.org or (530) 564-4444.

Share:
Tags:Affordable HousingMeasure LMeasure RSenior HousingWest Davis Active Adult Community
Previous : Police Racially Harass and Retaliate against One of Their Own
Next : Council to Have Downtown Plan Check In