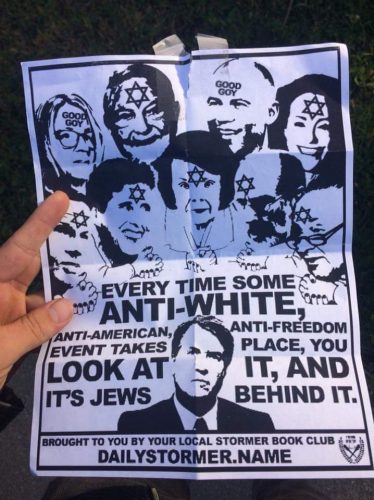 The Vanguard received word on Monday that an anti-Semitic flyer was found on and near the UC Davis campus.  According to a post by UC Davis Chancellor Gary May, the flyers have been removed and officials are working to identify those responsible for posting them.

The message on the flyer was: “Every time some anti-white, anti-American, anti-freedom event takes place, you look at it and it’s Jews behind it.”

The flyer states: “Brought to you by your local Stormer Book Club.”

According to Wikipedia, The Daily Stormer is “an American neo-Nazi, white supremacist, and Holocaust denial commentary and message board website that advocates for the genocide of Jews, and the legalisation of rape.”

It considers itself a part of the alt-right movement.

“Its editor, Andrew Anglin, founded it on July 4, 2013, as a faster-paced replacement for his previous website Total Fascism.”

Wikipedia notes: “The site is known for its use of Internet memes, which have been likened to the imageboard 4chan and cited as attractions for a younger and more ideologically diverse audience. While some white nationalist authors have praised The Daily Stormer’s reach, others have taken issue with its content and tone, accusing Anglin of being an agent provocateur, used to discredit true

It adds: “The Daily Stormer orchestrates what it calls the ‘Troll Army’, which is involved in Internet trolling of figures with whom Anglin disagrees politically. In August 2017, after causing outrage by insulting the victim of a ramming homicide at a far-right rally, the website was rejected by several domain registrars.”

In a statement by Chancellor May, he said, “The message on these flyers is reprehensible and does not represent who we are as a community.”

He explained: “Our Principles of Community express our dedication to mutual respect, understanding, compassion and caring for everyone, regardless of their religious affiliation, culture, ethnicity or gender. I ask each of you to uphold those values.”

The Chancellor added, “ In addition, the person or persons responsible violated our posting policy.”

He noted, “UC Davis is a diverse community comprised of individuals having many perspectives and identities. To all of our students, faculty and staff, please know I won’t stand for intolerance of any kind.”

Share:
Tags:Chancellor Gary MayCivil RightsHate Groups
Previous : Guest Commentary: We Need Rent Control in Davis!
Next : It’s the End of the World As We Know It, Trump Feels Fine