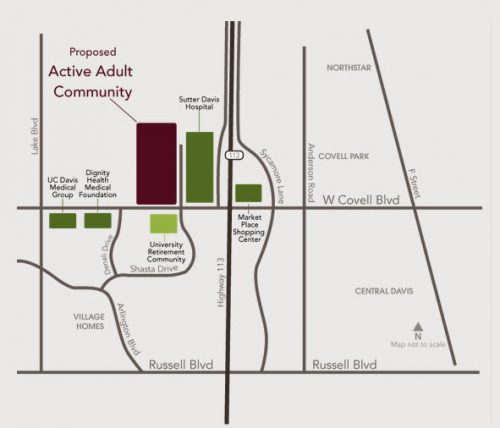 Keeping an open mind is important in civic life.  One reason for doing that is that once you make up your mind, you tend to use arguments to rationalize your position.  Whereas, if you keep an open mind, you can explore different ideas and see where they take you.

When I first looked at the West Davis Active Adult Community (WDAAC), I was immediately concerned about several aspects of it: it was a relatively low density project, it was located on the periphery, it was far away from the core of town, and it was the type of housing that I feel we need to move away from.

I still agree with much of that assessment – however, I have come around to the view that the location of the project is actually much better suited for a senior housing project than I originally gave it credit for being.

Part of the problem with the criticism of the location is that people are thinking in terms of one-size-fits-all.  We need our housing near the core, where people can walk and bike and get out of their cars rather than drive.

There are problems with that view.  While we are looking at densifying housing in the core, there is a limit to what kind of housing we can put there and how much.  At some point we are going to have to add housing outside the borders of Davis.  It is not clear that the West Davis site is any worse than any other peripheral land.

But there is a more fundamental problem – not everyone who lives in this community needs to be close to the downtown for their center of life.  That’s really the idea that we need to re-examine.

Consider that this project would be across the street from the University Retirement Community (URC).  It’s location is actually very good for an aging adult.

Let us look at what is around there.  First of all, many of the city’s medical offices are located nearby.  You have Communicare  and Sutter Medical Offices located next door.  UC Davis Medical Group and Dignity Health Care are estimated at about a quarter mile from the project.  You have Sutter-Davis hospital for emergency services, and even healthy, active aging adults need access to medical care and this is a very good location for such access.

What else do folks need?  There is Safeway for groceries, which again is within half a mile.  People can say, well that’s too far to walk.  First of all, how do you get closer than that to a grocery store unless you build one on the property?  Second, you can do things like a shuttle, just like they do with URC, so that the residents don’t have to drive themselves.

You also have a CVS pharmacy in the same Marketplace shopping center, right next to Safeway.  That will clearly serve the needs of the residents, and, again, it is either a short drive, a walk or bike, or a shuttle bus away.

There are also a number of restaurants nearby for dining options.  There will be a recreational and exercise center for activities.

In short, most of what an aging population needs is going to be located at or near the property.

I get it – if you want to live close to downtown, then WDAAC is not the place for you.  Many of the folks who may be looking to downsize probably currently live closer to the core.  There are some senior housing options closer to the core, but, in terms of a larger development, I just don’t see that as feasible.

But, contrary to the claims of opponents of this project, this is really not a poor location for seniors.

As Mayor Pro Tem Gloria Partida put it: “This development fits a need for some of our seniors. Not all seniors want to be Downtown. Downtown is not the Mecca for all seniors. Walkable communities can be incorporated in all areas of our community.”

That does not necessarily negate other concerns people may have – many of which have been raised during the course of these discussions.  But the location does not seem to be a good reason to oppose this project, and may even be seen as a reason to support it.

55 thoughts on “Commentary: One Size Does Not Necessarily Fit All in Smart Growth”