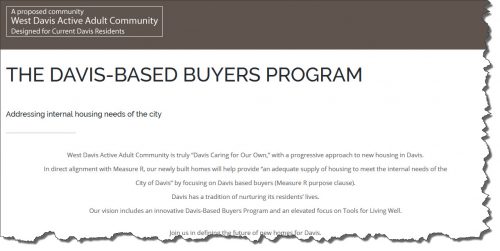 Last week, a federal complaint was sent to the Vanguard and other media sources – to date, however, none of the parties have been served with notice of a lawsuit.

Mayor Pro Tem Gloria Partida pushed back against the suit, noting, “Lawsuits have become a norm, adding expense and time to every new development.”

She noted, “One of the reasons Davis’ racial diversity has remained low is that Davis’ sensible growth practices have essentially priced people of color out. The irony of this lawsuit is that it brings forward many of the ways our slow growth policies, which are really at the crux of why people are protesting this development, perpetuate segregation and impact members of protected classes.”

In the crux of her critique, she argued, “This lawsuit is not helping me or other people of color that need housing. It is not helping seniors that need specialized development. Worst of all is the bald face appropriation of civil rights issues to negotiate a desired outcome for a land use issue.”

I agree with the mayor pro tem, that this suit will not help people of color and I agree with the Enterprise editorial (or at least the part that doesn’t exacerbate the problem): “If Davis

demographics worry you, the absolute best way to guarantee they never change is to build nothing.”

The question that many people will ask is whether the suit has merit.

Part of the problem is that it is hard to evaluate the impact of the Davis-Based Buyers Program, absent a clearly defined program.  Will the result of limiting buyers be to create a less diverse project?  Does such a project violate fair housing laws?

We can all speculate on the answers to those, but there is one thing that becomes clear – we do not know what this program will look like.

Much of the language of the Davis-Based Buyers Program is not formalized.  There is one section of it contained in the Development Agreement and that is probably intentionally vague.

How vague?  Vague enough that we could conceive a court may throw out any lawsuit, arguing that it is simply not germane or a live and active dispute.

For instance, in the Development Agreement, it states, “Prior to the issuance of any building permit, Developer and its successors and assigns shall (a) develop and implement appropriate local-connection requirements … ”

Language of that sort makes it clear that neither the city nor the developer have clearly established guidelines for the Davis-Based Buyers Program.

Instead, such details will be developed following the election and prior to the issuance of a building permit.  To date, there has been no “program” submitted to the city for review as required by the Development Agreement (“provide City with a copy of such verification procedures”).

Even more important is additional language, which makes it clear that the program must be “consistent with all applicable Federal and State fair housing requirements, including but not limited to the Federal Fair Housing Act (42 U.S.C. §3604), the California Fair Employment and Housing Act (Gov’t Code §12900 et seq.) and the California Unruh Act (Civil Code §51 et seq.) (the “Fair Housing Requirements”)…”

The plaintiff alleges in his introduction to the complaint: “The result of this ‘local resident’ restriction is the continuation of a racially imbalanced community and the exclusion of minority would-be purchasers in violation of the Federal Fair Housing Act.”

So how does a program that is required to be consistent with the Federal Fair Housing Act somehow be in violation of the same act?  How does one square these seemingly contradictory claims?

This is at the core of why we immediately deemed this to be a political rather than a legal claim – a claim at the behest of the opponents of the project.

Looking at this in the best possible light, the lawsuit seems to be premature.  If there were a legitimate claim about the legal issue – instead of political issues surrounding the election at the hands of the voters – the opponents of the project would simply have waited for the outcome of the election, allowed the program to be implemented, and then could determine that the program was indeed in violation of federal and state fair housing requirements.

This legal defense, of course, leaves the project open to a number of political complaints.  There are complaints that the program has been a centerpiece of the selling point of the project to the voters, and yet it is written in such a way that it could effectively disappear should a legal challenge prove successful.

However, that is a political question for the voters, not a legal issue that will lose in federal court.  There are a number of legitimate political issues surrounding the Davis-Based Buyers Program, but given the language in the Development Agreement, it would be hard to conclude, at least at this point, that the program is in violation of federal law.

37 thoughts on “Commentary: Is the WDAAC Civil Rights Lawsuit Premature?”