This article presents data documenting housing growth rates and cost increases for the U.S., California, and the Sacramento–Roseville–Arden-Arcade MSA (Metropolitan Statistical Area; consisting of El Dorado, Placer, Sacramento, & Yolo counties) as a whole, as well as selected jurisdictions within the MSA and neighboring jurisdictions in Solano County.

The purpose of presenting this data is to provide context for land use policy discussions and to place local growth characteristics of Davis in context with the greater region. There are mistaken assumptions and falsehoods not supported by evidence that are frequently repeated in such discussions, and my hope is that this compilation of statistics will help guide discussion about the challenges our community faces with an eye to a balanced approach that includes a careful examination of evidence.

Figure 1 is a chart showing housing unit growth rates by geographic area on their own. Figures 2 and 3 show X-Y scatter plots with the housing growth rates plotted in the x-axis compared to housing rent increases and housing value increases, respectively, plotted in the y-axis. These are intended to show direct comparisons between the two sets of data, along with patterns and trends.

The following is a brief summary of several conclusions looking at the data focused on Davis. I hope that this article and data stimulate further discussion far beyond these few observations. 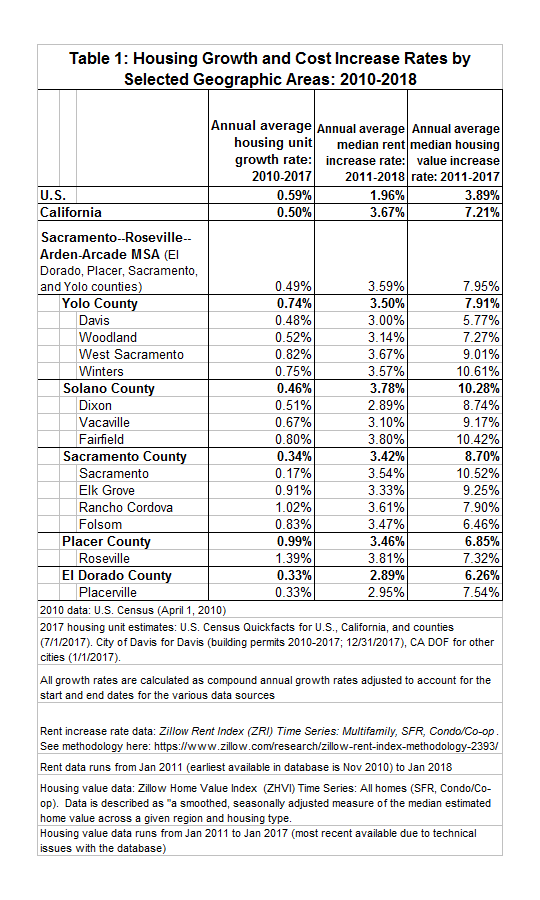 Rik Keller is a university instructor in communication studies and social work. He has 17+ years of professional experience in demographic analysis and housing policy & analysis in Texas, Oregon, and California after obtaining his master’s degree in city planning. He is also a 10+ year Davis resident and a current renter.