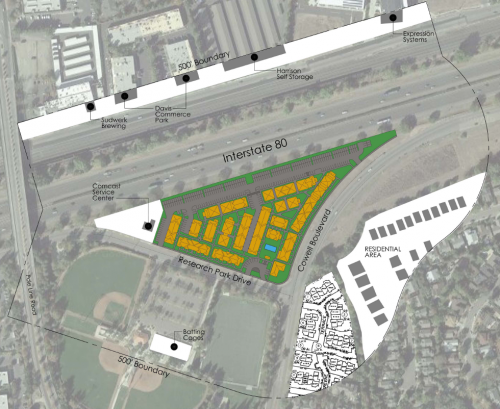 The Davis City Council on Tuesday was unsure of the final form of Plaza 2555, but the councilmembers were convinced that the site should be residential rather than commercial, as currently zoned.  There was pushback from a handful of members of the public on the type of housing at the location, with a push for more family and workforce housing – a theme on Tuesday – and away from student housing.

The council, which was not going to approve the project anyway at this meeting, voted 5-0 to create a council subcommittee, comprised of Mayor Pro Tem Gloria Partida and Councilmember Dan Carson, to work with the development team and the city to create a final project that was acceptable to both.

For their part, the development team pushed the notion that most of the units – two-thirds in total – would be three bedrooms or fewer.  They argued these were not “purposed-built student housing,” pointing out that the front doors of the facility open inside rather than into an interior corridor, that the buildings themselves are detached and the building mass is separated rather than monolithic, that leasing would be by the bed and the majority would be smaller apartments.

The developers pointed out that there are actually 5.5 times as many families with four or more people in a household as there are non-family households of that size in Davis.

Finally, the developer called the overall location great but argued it was not feasible for commercial development, citing the distance from the freeway among other factors.

Mayor Pro Tem Gloria Partida said, “This project is really difficult for me because I feel like it pits two of the things that are really important – I’m really a proponent of economic development

and we need housing.”

She said, “It’s unfortunate that we have to pit those two things against each other.”

She said that, in their goal setting, they want to do an inventory of their commercial space and stated, “We don’t know if it’s reasonable to give up commercial in exchange for housing right now.”

With respect to the four- and five-bedroom apartments, “It feels like we’ve latched onto this idea that four and five bedrooms make this a student project.  I disagree with that to some extent because I lived with my three children in two apartments in town.”

Two of the apartments she lived in were one- and two-bedroom apartments “and those are full of students.”

“The only place where we lived that only had families was an affordable housing unit which was Fox Creek,” she said.  That was a three bedroom.  “Students are going to go wherever there is space.”

She added, “If we had more housing, I don’t think we’d be having this conversation so intently.”

Councilmember Will Arnold pointed out that he would like to see “more of the smaller units.”  But he pointed out that, as a Transit Priority Project, which is exempt under CEQA, they are maxed out at 200 units.

He said, “That does add a level of difficulty here that every time you ask for a smaller unit, you’re not just changing the configuration, you’re taking beds under a roof away from potential renters.”  He called it a “balancing act.”

Councilmember Arnold said, “I’m not convinced it is a great place for commercial… it is kind of hard to get to.”  He noted that the hotel would be “equally hard to get to” but pointed out that “in 2018 you book a hotel online, you plug it into your maps, and you go to wherever the map tells you to go and that’s where you stay that night.”

He said, “That’s not the same if you’re trying to get people to eat at your restaurant or go to your coffee shop.  I do think there’s a difference between a hotel and commercial that’s trying to attract passersby.”

He also pointed out, “Commercial land is not all created equal.  I take exception to the notion that we’re talking about an innovation center and yet we’re taking this out of commercial production.”  He noted that the innovation center is about “scalability of these businesses – a 200 acre parcel – allows for something different than a seven and a half acre triangle in town.”

He said he’s in favor of converting this to residential and also a proponent of an innovation center.  “I don’t think those are mutually exclusive ideas,” he said.

Councilmember Arnold added, “We are still very far behind in providing adequate rental housing for our citizens.”  He said, “I find it somewhat interesting that folks that were opponents of these other projects that we’ve passed have said, well these projects passed we don’t need anything anymore.  When  they were fighting tooth and nail against those projects and at least three or four of them are still under lawsuits, so who knows what we’re going to get.”

He did add, however, that despite the lawsuits, some of these projects are going forward.  Davis Live, for instance, passed the deadline for the opponents to file against that one.  Sterling is being built.

And so he did argue, “We are in a position to be more discerning and make a bigger ask.”

He said, “The need for housing is real in Davis in 2018.”  And he added that, while he is skeptical about the reports that commercial doesn’t work there at all, he did say, “I’m not totally torn up over losing the commercial site.”  However, he suggested the developer may want to look into more mixed-use components for this site.

“I’m pretty intrigued by the micro-units,” he said.  In terms of unit mixes, “Ones, twos and threes – absolutely.  No question – we need those.”

He said he would go with some fours, but added, “I’m not excited about five bedrooms or larger.”

Councilmember Frerichs added, “Any mix – regardless of the project before us – any mix is going to be rentable, basically from now until probably eternity.  There is going to be a demand for these units.  I do not see a situation, whether it’s a two-bedroom unit or a five-bedroom unit, where you’re not going to have the ability to have that rented.”

Mayor Brett Lee had early pushback against the project and noted that he has “some discomfort with the proposal as is.”  He said, “I think there’s something lacking.”  And he asked the developer to think “about how to make it more special.”

The council then assigned the two new councilmembers to sit on the subcommittee and get the project from where it stands now to the point where they can approve it.