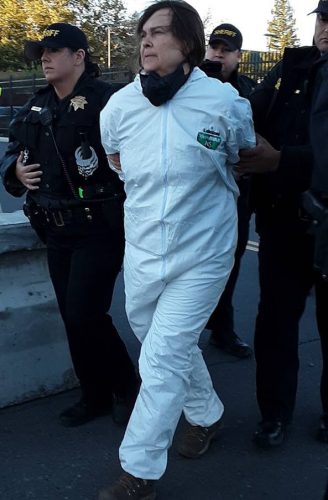 Eight environmental activists who maintain “Monsanto is poisoning the world” were arrested at the main gates of the Woodland Monsanto Headquarters in the early morning hours Monday – last year 10 activists blocked the driveway and were jailed.

This year the environmental justice activists – as many as about 40 or so intermittently blocked the entrance from 5 a.m. until the arrests several hours later – were joined by nearly 20 Yolo County Sheriff’s deputies, and Monsanto security officers in an uneasy standoff that began before dawn on a very windy, chilly Fall morning.

About 7:30 a.m., Monsanto had apparently had enough of the loud, noisy protest and bullhorns and beating drums piercing the early morning air. A company security officer approached activists laying in the road blocking traffic into the facility and informed them he was making a “citizen arrest.”

Deputies quickly came in, made arrests for trespassing and led protestors away in handcuffs to an awaiting van without any apparent incident. All eight arrests were completed by about 8:30 a.m.

Those arrested were booked and released from custody by about 2 p.m. later in the day. They have a Jan. 22, 2019 court date in Yolo County Superior Court.

Last year, it what was dubbed the “Monsanto 10” case, and all charges were dismissed by the court after parts of three days of trial. In fact, Judge Paul Richardson declared the prosecution had not

proven its case and dismissed charges before the defense could present its case in chief.

The controversy last year surrounded a decision by the District Attorney to not file the case as a misdemeanor as originally charged, thereby denying the defendants the right to a jury trial and a county paid attorney. The case proceeded as an infraction in traffic court – usually a 20 minute judge only trial – but became messy before being dismissed. Defendants called several deputies to testify and tried to subpoena Monsanto executives. https://www.davisvanguard.org/2018/03/monsanto-protestors-found-not-guilty-yolo-county-trial-thursday/.

Activists Monday were quick to note that the Woodland Monsanto/Bayer plant is the world’s largest Biotech seed facility in the world, charging Monsanto uses genetically modified foods (GMOs) in foods that have been “linked to an array of health and safety issues.”

Those protesting also claim that the herbicide Glyphosate (used in Roundup and other weed killers)  is an endocrine disruptor, and found in milk, corn and other foods. It’s sprayed, they said, in school yards and public parks as well as in neighborhoods by homeowners.

“The Bayer merger with Monsanto now includes Bayer’s dark and sordid history in the chemical and pharmaceutical industries.  Bayer was part of the IG Farben group in WWII that used the chemical Zyklon B poison gas to exterminate millions of people in Nazi Concentration Camps, along with their conducting numerous, brutal and inhumane tests on concentration camp subjects—children, men and women, to see how they reacted to their cruel experiments and chemical torture,” according to a “fact sheet” circulated by the protestors.

The “fact sheet” also said that Bayer and other drug companies participated in a “blood-farming” scheme that led to the deaths of thousands of hemophiliacs because of tainted blood plasma.

“Monsanto has been responsible for the manufacture of genetically modified ingredients or GMO’s and herbicides like Roundup, which contains glyphosate, for many years. Glyphosate was declared by the World Health Organization as a probable carcinogen, though there is worldwide and factual evidence proving that it is a carcinogen.  The state of California passed a bill that now directly calls glyphosate a carcinogen and requires the labeling of such on the product (Prop. 65), but there is no enforcement for safety,” said Bob Saunders, a spokesperson for the protest coalition.

In the fact sheet circulated by protestors, Glyphosate is said to be the “most widely used pesticide in California and in the United States, with more than 300 million pounds used in U.S. agriculture, primarily due to the widespread adoption of genetically engineered crops and the resultant growth of super weeds.  In 2013, 10 million pounds was used in California alone, with half of that usage being sprayed in eight of the state’s poorest counties on farm fields, lawns, gardens, school grounds, and parks.”

“We eat the same pesticides that are killing the bees and butterflies when we eat foods containing GMO’s.  2-4-D/Agent Orange (created by Monsanto and widely used in Vietnam), is now an approved additive to the chemical cocktail and has been approved by the EPA, which is counter intuitive,” said Saunders. “We are calling for an immediate moratorium on the spraying of Glyphosate/Roundup and all broad spectrum pesticides while we are working on and pushing for a full and enforced ban of these herbicides/pesticides.

“No school grounds where children lunch and play, no public parks where children and families lunch and play, no baseball, football or soccer fields, and no backyards and gardens, should ever be subjected to glyphosate and other pesticide spraying.  There are much safer and sensible alternatives that can be used to eradicate weeds and the like and they should be used now,” he added.

“Advancing life is what Bayer cares about. The earth’s population is rapidly growing. Its natural resources are limited. This calls for innovation that helps farmers improve this year’s harvest, and ensures the health of their fields, environment, farm operations and the global food system for generations to come. We take great pride in being an ethical, responsible and transparent company. Our team has plenty of mothers, fathers, sons, daughters and grandparents, who want to look after the health of their families and communities around the world, and who care about our farmer customers. We are committed to having an open dialogue about modern agriculture and how food is grown as we use digital tools, data and research to find solutions that balance the need to feed people and protect the planet. Through innovation and collaborations, we develop new tools that help farmers grow food using less of the earth’s natural resources. While we respect that there are different points of view on these topics, and it’s important that they’re able to express and share them, unlawful actions aren’t appropriate way to advance this important discussion. We respect the rights of all people to peacefully assemble and welcome honest debate on any issue.”