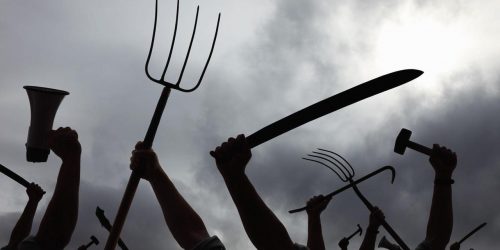 Yesterday Sharla C. said . . .  yet people are willing to destroy all good will in the process.   I don’t know if there is much goodwill left to burn in Davis’ politics.

Sharla’s comment brings back to mind Robb Davis’ assessment in the June 27th Vanguard article Mayor Davis Critical and Concerned about Future of Community as He Exits the Council  His comment in that article was as follows:

We seem to be growing older as a community, more change averse, angrier, and more cynical. There is very little celebration of what is good in Davis. […] Accusations of wrongdoing and that we lack concern for citizens’ needs are an almost daily experience for a council member. We are frequently told that we caused harm to community members. I can’t count the number of times people have accused us of lying or hiding the truth. […]  I am most concerned about crumbling social capital and increased ideological tribalism that divides not only Republicans and Democrats, but also divides natural allies along smaller, and ever less meaningful, fracture lines. I had hoped to use my skills to bring people in conflict together to solve problems. Sadly, I have witnessed more division, not less.

When I read Robb’s “tribal” comment in June, it was very striking, especially since he singled me out by name in his comments as one example of the accusations of wrongdoing.

Perception is reality, and it was clear from Robb’s comments, both in the article and at the Measure J forum, that he had “joined” a tribe and he also unilaterally believed I had joined a tribe as well … a different tribe from his.  Instead of treating one another as individuals, with individual sensibilities, we were assigned “tribal” labels, with tribal winner take all, “we win, you lose” sensibilities.

Sharla’s comment sounds many of the same notes as Robb’s, and both of their comments prompt me to wonder whatever happened to “one person, one vote” where each individual simply voted/votes their conscience.  I know in the case of Measure J, I personally “joined” no tribe.  I simply fought for what I believed was the best possible outcome for our community.

Why do individual decisions of conscience have to be “tribal”?  Unilateral assignment of a “tribal label” resonates with the kind of winner take all thinking that pervaded the last Presidential election and the recent Kavanaugh confirmation hearings … and most of the time in between.

Two years ago (10/2/2016), when Robb Davis made the individual decision (as Mayor) to give life to the voices of the opponents to the installation of the Gandhi statue at Central Park, he was in my opinion acting from his conscience in the best traditions of “one person, one vote.”  Nonetheless, he was actively accused of joining the “other tribe” by many of the Gandhi statue proponents, simply because he was willing to let everyone be heard.

I personally experienced that “tribal” anger at 10:30 pm that Sunday night after the Central Park “giving everyone a chance to be heard” event when I was woken from my sleep by a telephone call from an angry Gandhi statue supporter berating me in the strongest terms for my support, both here in the Vanguard and also in public discussions, for Robb’s defense of the Gandhi statue detractors right to be heard.

At the heart of the caller’s angry complaints with both my behavior and Robb’s was a winner take all polarism. Any semblance of the “good will” Sharla refers to was wholly absent.  Perception was reality.  And the caller’s perception of Robb and me was that each of us had “joined” the other tribe … just as Robb’s perception of me this past June was that I had joined the “other” tribe.

Perhaps the place to start is to take a page from Sharla’s “book” (her comment yesterday), and reach into our own individual store of good will and try and treat each other individually rather than as part of a tribe.  My fight to provide housing for 5,000 to 7,000 students at Nishi rather than 2,200 was not a decision based on “tribal” loyalties.  Robb’s decision to provide a place and time for hearing the voices of the Gandhi statue detractors was not a decision based on “tribal” loyalties.

The choice is ours.  Hopefully it is time to begin to mend fences.  Let’s start by celebrating what we do well as a community, and at the same time try and do even better.

63 thoughts on “Guest Commentary: “One Tribe, One Vote” or “One Person, One Vote”? Hopefully We Can Do Better”