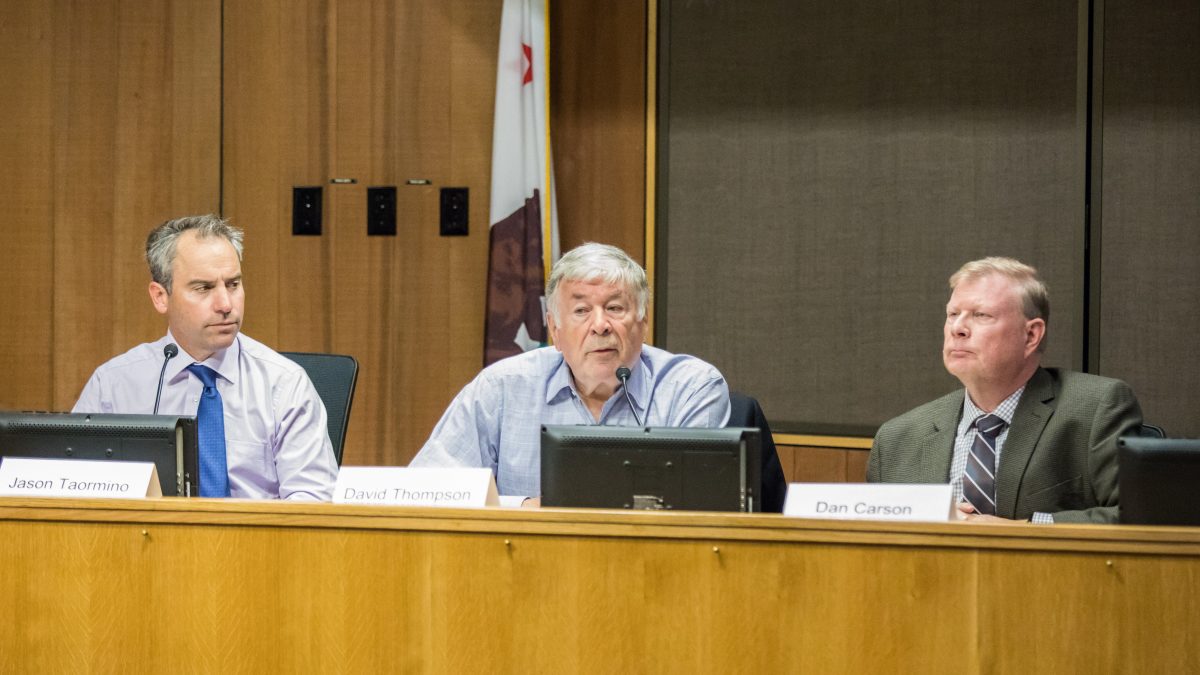 CivEnergy hosted a forum on Measure L on Sunday at the Community Chambers in Davis.  The Yes on L side was represented by developer Jason Taormino, affordable housing Developer David Thompson, and Councilmember Dan Carson.  On the No side was Alan Pryor and Rik Keller.  Linda Deos served as moderator.

Question 1: discuss the financial impacts of the proposed project on the city of Davis

The developer giveaways include huge discounts on project impact fees normally paid for a development of this type.  For instance, roadway fees are reduced by approximately 60 percent.  Storm water fees approximately 40 percent.  Park, open space, public safety and general facilities, all are reduced between 25 to 50 percent.  Actual reductions are between $8.4 million to $5

million – a giveaway of $3.4 million, a 40 percent discount that goes right into the developer’s pockets.

What could the city planners and council be thinking, to give away this amount of money that could instead be used for infrastructure development in the neighborhood?  The developer says that this is because there are fewer people at the facility but I would suggest that the public safety needs may actually be increased because there will be more emergency calls because of the higher percentage of elderly people.  Storm water costs will be the same regardless of how many people are living at a site – it may be greater because they have periodic sheet flooding on that side of town.

General facilities costs may also be greater because of the higher percentage of services provided to our seniors in town – such as the cost associated with the senior center.  Roadways will not be reduced that much because the biggest wear and tear of our roadways is not the cars that people drive but the large service vehicles such as garbage trucks and delivery vans which use will not be reduced in this project at all.

I scrutinized the numbers with my commission very carefully.  We had five meetings over six months looking at the way that the city evaluates projects and their fiscal impacts.  This one has about a $350,000 net fiscal benefit to the city – year after year.  The main money is coming from property tax, sales tax, and some state monies called property tax in lieu of VLF [vehicle license fee].

There is no giveaway on the one-time fees.  There was an adjustment on the development impact fees side of the ledger and more resources than that have been put back on the other side of the ledger in terms of what are called community enhancement funds as well as various amenities in the project that are being paid for out of the developer’s pocket.

So we have things like an extraordinary ag buffer that is really a linear park.  A series of important bike path improvements along Covell Blvd to make things safer.  Donations for a 50 meter swimming pool.  All sorts of improvements to help retrofit people’s old homes – there is value.  This is a good deal for this city.

In addition to these huge subsidies of impact fees reductions, the developer finagled even more givebacks from the city.  For instance, the developer is putting in a minimal amount of changes on Covell Blvd, but the city is reducing the already depleted roadway impact fees by another $1.8 million for them putting in that, without them requiring any invoices or receipts to prove that they’ve actually spent that much money.

Also on the issue of parks fees, the developer is getting out from almost all of these fees because they’re claiming their for-profit, activity and wellness center provides neighborhood recreational activities and they should be given a discount for that. And they’re claiming that the walkway along Covell Blvd, is recreational, so they’re getting credit for that.  Which is actually double dipping because they’re getting credit for the roadway enhancement fees as well.

You can play the cherry-picking game of one item that goes down, and then you ignore the other stuff that goes up and you can come to an incorrect conclusion.  The city in these major development projects looks at all the costs, all the amenities, in a comprehensive way to make sure that the city is getting the best, maximum benefit for our citizens.

That was done in this case, carefully and analytically.  I just started getting into  the list of things.  This project provides other benefits that will, for example, help our city meet its greenhouse gas reduction goals.

Not only do they provide money for when somebody moves down to this project to help retrofit their house, they’re providing subsidies for folks who would like to buy all electric homes.  They’ll provide additional money for all electric appliances.

There are so many things on the list here – they are all in the development agreement.  Anyone can read that document themselves online, it’s on the city website, and you can see for yourselves all the benefit to our citizens that’s in this project.

I’ll go back to the question as to whether or not the city is going to make money on this.  In addition to the developer giveaways, there is a strong indication that the city may actually lose money every year on this project.  The city projects a positive annual return to city coffers as a result of build out of this project.  But they assume reduced costs on a per resident basis for providing basic city services.

One Budget and Finance Commissioner prepared an alternative analysis that projected an annual deficit of $150,000 plus per year.

Let’s not forget that this development is about taking care of senior citizens.  It’s about taking care of our community members and allowing them the opportunity to stay in Davis and not have to move.  As Mrs. Goldstein said to me, Jason I live in a 3000 square foot house next to an elementary school.  Build me something smaller so I can move and a family can move into my house.  That’s what we’re trying to do.

There are many different ways in which the city of Davis has an affordable housing plan done.  We worked with the developer on what is called a project individualized plan.  The developers came to us and asked us if we would work with them.

So we rolled everything into low income housing so that we would deal with those most in need in our community.  There are other ways in which we could have done that.

At the time, we learned of course that the land that we had been donated could accommodate almost three times that amount.  We can build 150 units on there.  We are allowed to build 150 units on there.  It far surpasses the city requirement – it is the largest piece of land that any developer has ever given for affordable housing in the city of Davis.

Now if they change that, and go instead under the rental provisions, of the housing ordinance.  It is true that they can look at that.  Then you have to calculate their low income housing requirements based on the number of bedrooms that they’re providing.  By our calculation, they should be providing 180 bedroom units there, which at a density of 20 units per acre, should require the developer to provide nine acres of land, not four acres of land as they’re proposing.

But if they don’t want to do that, they can satisfy their obligation by ponying up $4.2 million in in lieu fees.  We fully articulated the details of that argument in a Davis Vanguard article to which no one has responded or criticized on that.

I think they’re ducking under the hoop in eliminating some of the low income housing obligations.

I get amazed sometimes at the kind of thrust that the no people have done.  Neighborhood Partners and our various non-profit organizations have worked in Davis for now over 30 years.  On all of the different projects, we’ve worked with all of the different developers, the critique that Alan and others have, is just preposterous.  It just doesn’t meet it.

The 150 units that we get to build, are for seniors.  Seniors do not need two or three bedroom units.  Elderly low income seniors, are usually single people.  HUD and other requirements are that we can only build a one-bedroom unit for them, they cannot live in a two bedroom unit.

We have 27 percent of the doors that will open for homes in West Davis – will be for low-income seniors.  We’re happy to have done that.  If No wins, we get nothing.

The developer is not making any contribution to the low income construction costs like every other recently approved housing project in Davis.  Nishi, Lincoln40, Davis Live, all of these sites were approved with approximately 15 percent of the rooms reserved for low income residents and the units are being built and managed by the developer and integrated throughout the project.

Sterling Apartments, the project chose to donate one-acre out of six, about 17 percent of the total project land to a non-profit, Mutual Housing of California, who will arrange for the construction and operation of the 38 units of low income housing, plus the developer is putting up $52,000 per unit towards the construction costs.

In contrast, West Davis Active Adult Community, they’re putting up four acres out of 75, less than six percent of the total project land donated to a non-profit, but no money at all is being provided towards construction costs.

The land that we have been given is worth $4 million – that’s a helluva a lot of money.  There’s no land in Davis that’s been given for affordable housing, ever before, worth $4 million.  $2 million will be put in by the developer to enhance the site and to do all of the site improvements.

The 15 percent that he talks about is really ridiculous.  It is a bed in a room.  Not a unit.  A bed in a room to share with a college student for $600 a month.

I asked David about that $4 million – where was it derived?  Does he have an appraisal on it?  No he doesn’t.  What’s the value of the land being purchased by the developer – is that four million dollars?  No it isn’t.  This four million dollars is pulled out of thin air.  They decided that’s what the land’s worth once it’s completely improved and utilities are brought to it.  The utilities are not costing $2 million to be brought to this site, they are actually brought right along the site just to provide utilities for the remainder of the project and put stub-ins for there.  That $2 million “donation” is ridiculous.