Opponents of the West Davis Active Adult Community have hit the project for being low density and sprawl.  For example, Alan Pryor and Pam Nieberg write: “WDAAC is a Sprawling Development Reminiscent of the 1950s and 1960s. It does NOT Meet any of the Sacramento Council of Governments’ (SACOG) Seven Principles for Smart Growth and Clearly Needs More Density, Different and Diverse Building Types, and Good Transportation Infrastructure.”

They add, “Rather than focusing on a modern, dense but diverse development model, the WDAAC project proposes a huge number of sprawling ranch-style homes on 5,000 sq ft lots reminding us of the excesses of the past.”

The applicants have tried to push back on this view.  They note, for example, that at 13 units per acre, the project is actually more dense than Grande Village and the Cannery (which is 12 units per acre) and slightly less dense than the much smaller Chiles Ranch project of 96 units on 7 acres of land. 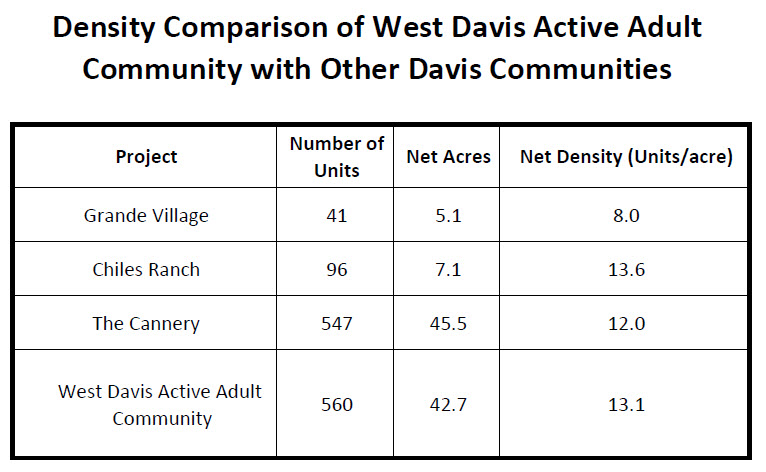 I disagree with critics who assail the project’s overall location, having noted that many of the key uses for seniors are in close proximity to the project – including medical offices, the hospital, groceries and pharmaceuticals.

However, on the issue of density, I disagree with the developers.  Their point of comparison is to three other traditional developments in town – all of which are primarily single-family homes on relatively large lots.

The developers push back on this point – they argue that people do not wish to buy smaller, more compact urban homes, but rather prefer the lifestyle of a residential neighborhood that would

They argue that you have to provide housing that people will buy.  While this point is definitely understood, there are a number of elements here that should be taken into account.

First of all, whether you agree or disagree with Measure R, it is in fact the law of the land.  This is a point that the developer has understood and recognized from the start.

As such, peripheral land is scarce in Davis.  We have a decreasing amount of available infill land and the result is that, if we wish to find ways to provide additional housing, we must be as efficient as possible with the land.

Compact development is the way to achieve much of this.

Second, while the location of the project and the type of needs of its projected residents probably lends itself to less car use than would ordinarily be the case – the truth is that we have to look at ways to more broadly reduce dependency on the automobile in order to reduce GHG emissions.

While a senior project in this location may actually serve some of those purposes, by building to far less density than other infill projects, we are limiting the benefit of the project itself.

Third and finally, we have to start moving the bar.  We aren’t going to be able to build a lot of projects likes WDAAC in Davis.  We do not have a lot of land that is available for development without a vote, and the public is going to have a short leash for future developments.

The opponents argue that the WDAAC opens up the entire northwest quadrant of the city to speculative, piecemeal development.  I would argue that they are wrong.  The development of that location would require votes of the public – a public that is not that willing to extent its support for such development.

Instead, I see the opposite problem – the WDAAC is likely to be at best a one-shot deal – a single approval, and therefore we need to be as efficient as we possibly can about any approval for peripheral development.

The bottom line here is, after this project there are no active proposals for Measure R projects on the radar.  Can that change in short order?  Certainly.  But, as of now, it does not seem likely that there will be another peripheral proposal – each is too speculative in terms of chances for approval, expensive to undertake, and is an overall dicey proposition.

If that’s the case, we need to be really careful to vet Measure R projects and make sure we get as much from them as we can.

In my view at least, I think the developers here are open to criticism in that they opted for a traditional development during a time when such developments are likely to be rare and at a time when it is not clear what other large developments the voters of Davis will be willing to support.

Given the overall housing crisis in California and the scarcity of available land in Davis, this project can rightly be criticized for not being dense or compact enough.  In our view, the future of development in Davis is going to look less like the comparison points that the developers are using for WDAAC and more like projects like Davis Live housing and the University Mall redevelopment – dense, compact, and tall, built on existing development and within the current boundaries of the community.