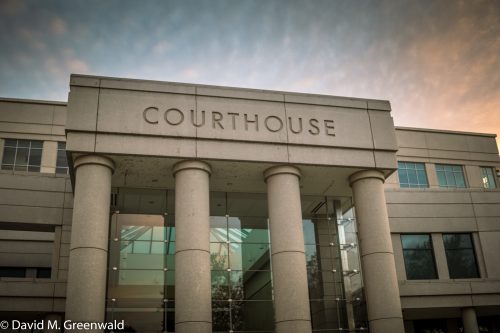 Daniel William Marsh’s transfer hearing resumed in Department 7 of Yolo County Superior Court today. At issue is whether Mr. Marsh should be remanded to the juvenile justice system, after being tried and convicted as an adult for the gruesome murders he committed in Davis when he was 15 years old in 2013. The attorney for the People, Deputy DA Amanda Zambor, began by calling an expert witness, Dr. Matthew Logan. Dr. Logan holds a master’s degree in education and a PhD in psychology, focusing on conflict management and crisis negotiation. He had 28 years world community police officer experience and spent two years in prisons, working with sexually violent offenders. He has written and published articles about psychopathy. Dr. Logan mentioned that he and Dr. Robert Hare, the psychologist who has written a book on psychopathy as well as several articles on the subject, are colleagues and friends. They put on the Hare PCL-R (Psychopathy Checklist-Revised) workshops, the checklist which is the international standard for the diagnosis of psychopathy in adults, as well as youths.

Dr. Logan stated that the PCL-R is the way for psychologists and therapists to determine whether the person is psychopathic, and it is not a self-assessment. PCL-R is scaled from 0 to 40. People who scored above 30 can be considered high-score psychopaths. The PCL-R checklist has 20 traits, which include glib and superficial charm, pathological lying, grandiose self worth and so on. By these definitions, high-score psychopaths will not only only tell lies because of benefit, they tell lies all the time and grab everything that has jumped into their minds. They talk a lot about themselves, the

capacity of what they can do. It is ego dominant and all about themselves. They also are really good at manipulating people, even police officers, therapists and teachers.

It has been mentioned many times that psychopaths have the inability to feel remorse. They intellectually understand emotion, but they do not have the ability to feel emotion and empathy for other individuals. Based on Dr. Logan’s intense treatment experience, there was not significant improvement in such individuals. People with psychopathy and other disorders only get interested in what is happening, but they do not have emotion for others. Some of them even refused to talk about their crimes, but that does not mean the memory causes them remorse.

Psychopaths have a very high need for stimulation, which is called proneness to boredom. They are fear-deficient, and involved in activities with high-risk behavior. Many of them take drugs, seeking the higher high. Psychopaths who involved instrumental violence in their acts always plan, target, and go directly.

How is PCL-R measured, based on these traits? Clinical judgment was the answer. The therapist needs to look behind the mask, and learn how to interview so they can see the real person.

Treated individuals who were violent recidivated at a higher rate than the untreated ones. The treatment can make the high PCL-R scoring psychopath more dangerous. Dr. Logan claimed that the structure of prison is really good for the psychopath. People who scored high on the psychopathy scale can do well in the structural and contained environment, but it does not mean they will also do well with a certain amount of freedom after release.

During cross-examination, Supervising Deputy Public Defender Andrea Pelochino examined the experiences shown on Dr. Logan’s curriculum vitae. She also questioned the static and dynamic traits of the PCL-R. Many of the items can change over time. Personality depends on length of time in life and also depends on the person who measures it. So Dr. Logan usually takes two people scoring with a plus and minus 3 error rate on the same score.

By the end of this session, Judge Samuel T. McAdam focused on the question of the dynamic factor which will change over time, and whether the scores can goes down. Dr. Logan admitted that they might be somewhat reduced. The retest should indicate the treatment effect, but there is not a whole lot of change for people who got a high score in psychopathy.