During Wednesday’s discussion at the Planning Commission on the Affordable Housing Ordinance, several of the commissioners referenced the comparison charge that showed how other communities have handled affordable housing.

The general consensus by the commissioners was that the previous 35 percent affordable housing policy was not feasible, and the only question was going to be whether the city could even make a 15 percent requirement work.

Looking at what other communities are doing is a good way to at least put the city of Davis’ situation in context. 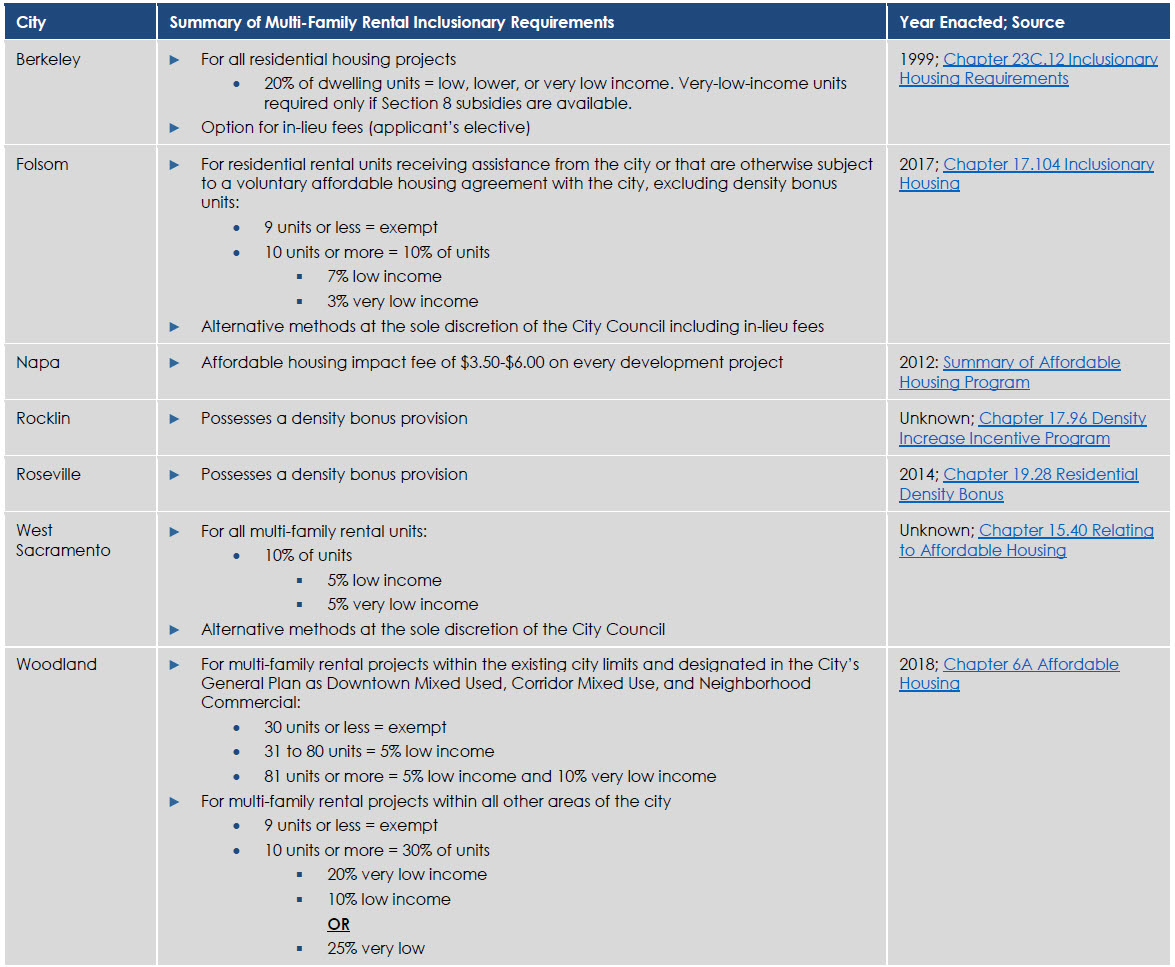 That’s the highest requirement we see.  The rest of the communities have much lower requirements.  In Folsom it is a total of 10 percent.  For Napa, there is an affordable housing impact fee of $3.50 to $6 on every development project.  Rocklin and Roseville both have a density bonus provision.  West Sacramento has a 10 percent requirement on rental units. 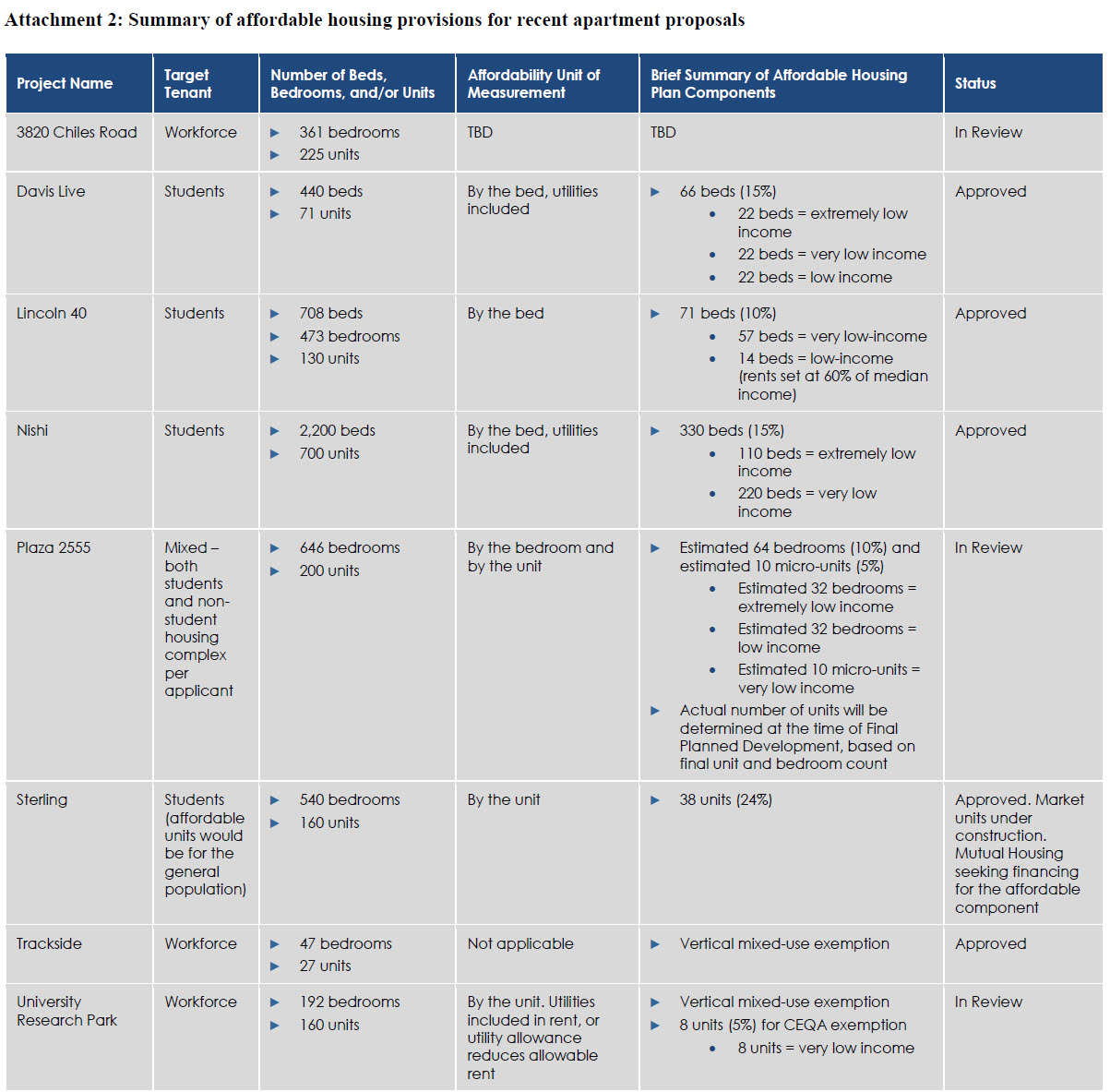 Plaza 2555 will have affordability by the bedroom and the unit.  The current estimate is 10 percent of the bedrooms and an additional 10 micro-units to get to the 15 percent requirement.

Sterling is one of the few doing it by the unit, and they have 38 of the 160 units.  But Sterling is the only one of these with a land dedication site.  In addition, the 38 units is a smaller fraction of the total number of the 540 bedrooms.

satisfying for a number of reasons, but it does seem that two things are clear.

First, we are looking at a negative sum game, as Commissioner Herman Boschken put it, where we are pitting social equity against economic development and it is a lose-lose prospect.  By that we mean, if we insist on a higher number of affordable units, there is going to be a trade off.  That trade off might that we give up other costs.  That trade off might be that we discourage the badly needed rental housing.  There is no good answer in this respect.

Second, while some have noted that we have done 15 percent at recent projects, the reality, as David Robertson pointed out, is that it was only possible because of the by-the-bed factoring enabling it to be viable.

The only two exceptions to this in recent history are Sterling and West Davis Active Adult Community – both of which have land dedication sites.

That raises the troubling prospect that on future projects which are not student housing and available for bed rentals and do not have land dedication sites, we may have to go even lower to provide any affordable housing at all.

Moreover, we should keep in mind that the next wave of housing projects are likely to be mixed use and exempt.  Although the commission pushed back slightly against the exemption on Wednesday, the

economic reality there seems rather clear.

A comparison chart to other communities that was distributed shows that most other communities are actually doing less than we are.  No one is at 35 percent.  Berkeley seems to get to 20 percent.  Woodland is getting to perhaps 25 percent on some projects.  But many are at 10 percent or only charged fees.

Among the public comments there still seems to be a disconnect, with some maintaining because we have done something it means we can still do something.  The problem with that view is it fails to consider how we have been able to do something, and that is where the analysis by David Robertson was helpful.  We were able to get to 15 percent because we able to put affordable beds together to create enough revenue for the developer to make it work.  But the scale doesn’t work when it moves to by the unit.

I think we need to start thinking outside of the box, as people like Mary Jo Bryan have suggested.  We need to look at funding strategies, and we need to look at a variety of alternatives including: parcel tax funding, lobbying for an increment tax renewal, and also considering the possibility of Measure R exemptions for high  percentage affordable projects.

That may not be the answer we want, but it might be the only way to get to the solutions we need.

Share:
Tags:Affordable Housing Ordinance
Previous : Commentary: Schools Made a Tough Call, Is This Really the Future We Face?
Next : Illinois Police Killed a Black Security Guard while He Was Doing His Job

6 thoughts on “Analysis: A Comparison of Affordable Housing Policies”