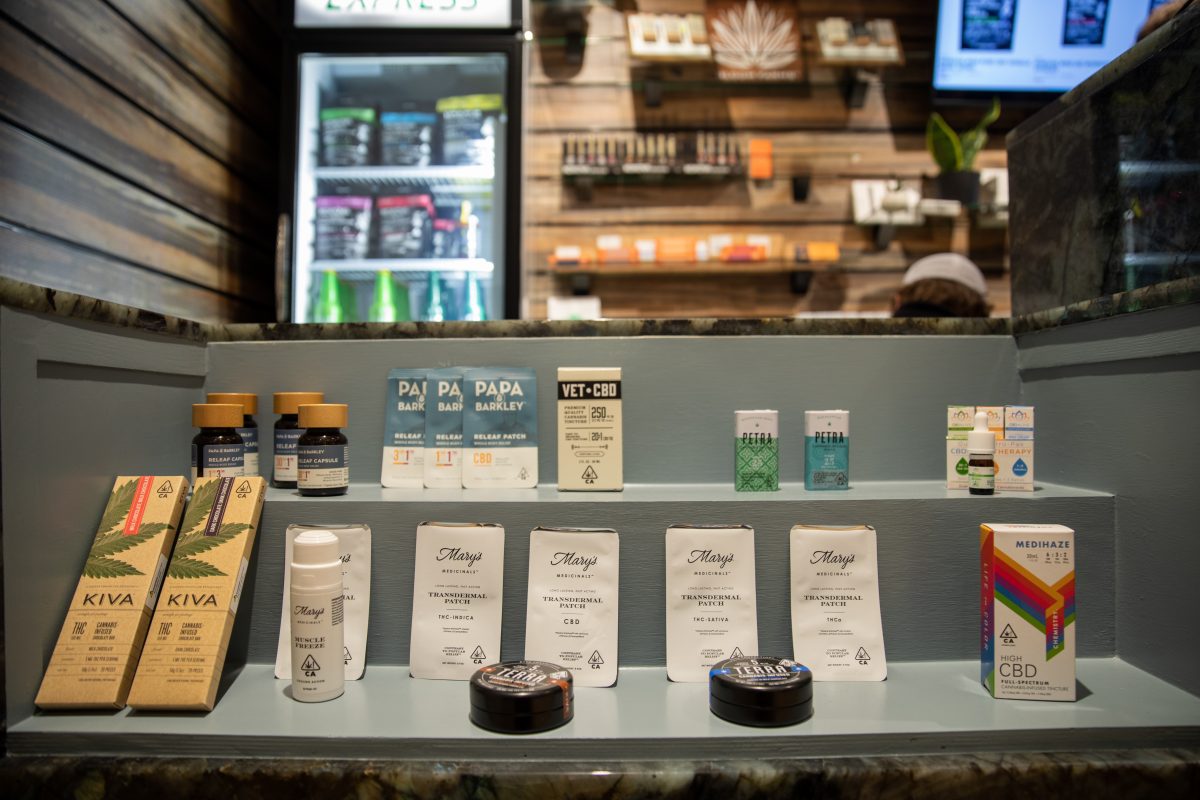 In a lot of ways, Davis has bet its future on the cannabis industry.  In May, they approved five storefront dispensaries and now they have approved four additional non-store front delivery-only cannabis retailers.  On Tuesday, the council passed an urgency ordinance to limit the number of delivery-only retailers to four.  In March 2019, the council can choose to expand either service type – but that might not give them much of a chance to weigh the market.

Rob and Mike Read  of F Street Dispensary are familiar faces in Davis, having been born and raised in the community.  The store has a big challenge – it is not very big, but has a big advantage, its location in the downtown. When the Vanguard visited this week, the place was hopping with a constant turnover of customers.

Rob Read told the Vanguard, “I think business is growing as people begin to learn that we are open and that we have parking on-site.”  He added, “We expect it to continue to grow as the community and surrounding communities learn that we’re here and they don’t have to go to Sacramento or solely rely on delivery.”

Rob Read said that, while he is surprised, his brother and business partner, Mike, is not, “in terms of the initial reception by the community in terms of numbers of customer.  We are well over three times busier than we expected to start out at and we’ve even exceeded that since.”

Location is a big part of their success so far.

“Due to our location, the community has watched us retrofit the building,” he said.  “People have said, ‘I’ve been watching you guys.’  I think that the location has helped.”

to put all the necessary pieces in place.”

He found getting the build out done quickly has been the most challenging aspect of the process.

“It’s not a city of Davis thing, it’s just the economy,” he said.  He said he believes that the economy is absolutely booming at this point and, to prove his point, he said, “Try to find a contractor to get something done quickly.  That was tough.  We did not meet our build out timeline.”

He noted that in the long run it probably doesn’t matter.  They would have liked to have gotten an earlier start and one of their competitors opened first, but they are doing well.

Overall, “We’re off to a good start.  Any start up will have its challenges.  With any start up, it’s systems, new systems need to be put in place.”

F Street has 15 staff members, but Rob Read explained that when they first put out a notice for hires they got over 2000 applicants.  Then it was a matter of finding good and reliable employees.

The background of the employees varies.  Some have worked in dispensaries before.  Others have worked at places like Apple.

“We do have people who have come from the industry,” he said.  “Other folks don’t (have experience), but they were able to portray knowledge.”  He said, “It’s people-people and knowledge.  I don’t want to put one above the other.”

Mr. Read told the Vanguard, “We’re excited about getting through the initial start-up phase and get into a community engagement phase.”

The Davis Cannabis Collective in a lot of ways has the opposite set of challenges to the F Street Dispensary.  They have a huge store with a huge waiting room, but their facility is a bit more tricky to find, located on 2nd Street kind of in the back of the complex with, among other things, Swim America.

They are the most recent to open and in fact tomorrow (Friday) at 4:30 pm will have their formal grand opening ceremony which the public is invited to.

Ashley Kammerer is a veteran of the industry and dispensaries.  So nothing seems to surprise or phase her.

“Business has been really good,” Ms. Kammerer said.  “We have been enjoying everybody that walks in the door.  We are really happy to finally be open because it’s been a really long journey to get here.  We’re all just excited to be here.”

She explained, “I’m not surprised (by anything so far).  I’ve been in the industry a long time.  I feel like people in this industry are really resilient, we have to jump through a lot of hoops.

Ashley Kammerer said that she really felt like everything had gone according to plan.  When really pressed she noted that she had to be project manager for the construction, which got outside of her area of expertise.

“That was a learning curve for sure,” she said.  “I’m just so happy to finally be open.  It’s been two years of my life, waiting for two years.”

She said what is different about Davis is “everybody knows each other.” 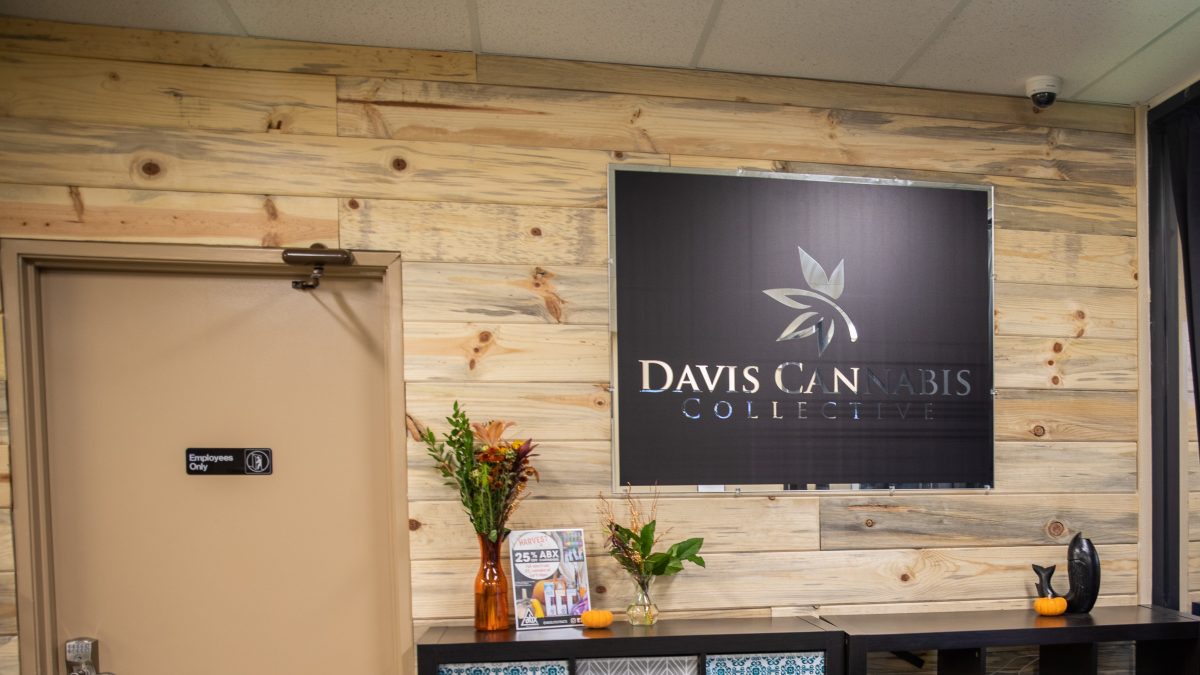 She said it’s “a total mix.”  They have a medical patient in their late 80s, and a very diverse clientele with a mix of professional people.

One of the points she emphasized was that the management here has roots in the medical side of the industry.

“The whole aspect of recreational adult use is new for us,” she said.  “We’ve been working in the medical cannabis field for so long. A lot of people who are coming in as ‘adult users’ are still using cannabis for medical reasons.  They just don’t want to go to their doctor and get a recommendation.  But they’re still coming in here because they want to sleep at night, they want to feel better.  They have anxiety.  Chronic pain conditions.

“Those people have found that using certain cannabis products can bring them the relief that they’re looking for,” she said.

A big part of their focus is on education.  “We’re really focused on educating people to use cannabis responsibly,” she explained.  “That’s our main thing.  We want them to use it responsibly so that they have a good experience and they get their money’s worth out of the products.”

She added, “We really feel like we pioneered the concept of ‘micro-dosing,’ which is using very small amounts of cannabinoid content in milligrams.”  She explained, “Your body actually reacts better to a smaller dose than a larger dose.  We’re trying to get away from that prohibition era notion of giant amounts of THC.  That’s the desirable product and moving towards this new age of awareness and education that is telling us that actually you’re more successful when you use smaller amounts of these items.”

The Vanguard already covered the Kana Company when they became the first to open in Davis back in September.  However, Stefanie Vasquez, one of the co-owners of the Kana Company, gave us an update on their progress.

She said, “We are doing well!”  She noted that is especially true, “considering we have only begun to advertise” and “we’re barely hitting the two months mark from our soft opening.”

Ms. Vasquez explained, “Davis is a very new market for us, but we are on target. We gained a following at our very first dispensary solely on reputation and referral, and with our minimal advertising in Davis, we are building a very satisfied client base again.”

She noted that she grew up with her mother who worked over 32 years at Mrak Hall in UC Davis.  She explained, “I’ve always loved Davis, and the close knit family and community culture it fosters. It helped me to tailor my business goals, with specific intention to show love and support for what Davis represents. My efforts have been very well received, very worth the attention and effort.”

On the other hand, she noted, “We’ve only been open for two months, so we are still very much in the infancy stages of establishing our strong foundation. Overall visibility has been a challenge. We are just outside of Downtown Davis, so we don’t get any free advertising or many passers by. Our street light is out, so at dusk it is extremely difficult for vehicle traffic to see us. We are working with the City to repair it and improve our lighting at the front of the property.”

Still, she believes that the overall prognosis “is fantastic.”  She said, “We are slated to be the only Northern California area drive-thru for cannabis. We intend to do more advertising to get the word out about our amazing staff, ONLINE service, great selection and TAX INCLUSIVE PRICING STRUCTURE! The response from the Davis Community remains extremely positive and supportive! We look forward to a very bright future providing Davis with a canna-business it will be proud of!”

The cannabis industry is very new in Davis, but within the next few months there will be a total of five stores and four delivery services in town.  The community as a whole will benefit in a number of ways, including a new tax base as well as the commitment by most of these businesses to support local charity and non-profits.