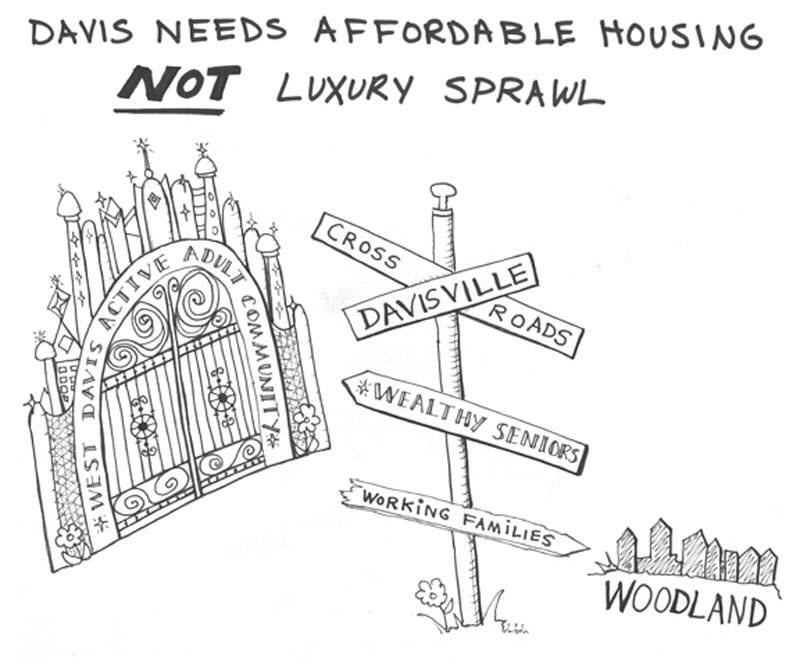 The Yes on Measure L/West Davis Active Adult Community (WDAAC) campaign has been saying that opponents of the project are “against seniors” and has been making unsubstantiated claims that the No On WDAAC campaign arguments are “lies” [see: https://www.davisite.org/2018/10/uncivil-discourse-at-the-civenergy-forum.html]. In the added context of the Yes on L campaign spending about $250,000 in this election cycle compared to about $7,500 for the opposition (as of reports filed 10/20/2018), this kind of messaging from deep-pocketed special interest groups who stand to make millions from cynical voter manipulation is offensive.

The following is a sampling of some Davis citizen comments against the Measure L/WDAAC project from social media posts that demonstrate that Davis residents are seeing through the blizzard of marketing money and the false charges of the project proponents. To my knowledge, none of these are from anyone working/volunteering on the No On WDAAC campaign, nor were they solicited by the campaign. It is notable that a significant number of the comments were posted on the Yes On L campaign’s own Facebook page posts/adverstisements.

*** “Building this is land used for wealthy sprawl. We end up with a sprawling high income suburb and no improvement in housing costs, especially for the lower income groups. Yes on this is a missed opportunity for affordable housing…. Essentially, we need to do it right because we can’t undo it. It’s there forever. Do we want sprawl that is for wealthy baby boomers and that has unpleasant racial overtones (and that won’t help the current housing market for those most affected) or so we want to pause and make sure that when that land is built on that it contributes to the Davis we want to see long term?”

*** “Measure L is just another “rezone some ag land and make millions” proposal floated by developers and realtors. You can see who’s behind by checking out the campaign contribution reports here:…”

***” There’s a lot not to like about this project (see existing comments) and a common counterpoint is ‘well it’s this project or no housing at all’. I disagree. We could vote this down and get a much better proposal in a year or two (not convinced Nishi v2 is better than v1 but you see my point). Also: it’s significantly harder to turn sprawl into smart development (leaving aside the other issues) then just build with some basic concept of smart density to start with.”

*** “what it comes down to is an attempt to keep Davis a white exclusive community!”

*** “Wealthy seniors move into luxury adult living and rent out their home at extortion rates to students who need to live somewhere while they better their lives, am I understanding this all

*** “What about the student housing crisis or the fact there is in general a housing crisis here. Luxury homes for seniors isn’t the answer change needs to happen but something that can help everyone not the select few.”

***”Double down on the NO on L. I spoke directly with the developer – not no, but, hell no. Not affordable, no guarantees on any of their ‘promises’ besides the discriminatory aspect of this development. Don’t be fooled – do your homework”

“Why do we want mostly urban sprawl single family homes for the purpose of pure growth? Wouldn’t a copy of Rancho Yolo (for example) have been an actual low cost senior housing option? A true Davis success story actually worthy of expanding City limits. Not this one.”

*** “Not for the average Senior, on a budget. For the wealthy only.”

*** “This political cartoon could not be more indicative of what the harsh realty is like to find adequate housing in Davis! NO ON L! This is an insult to all young people trying to make a hard earned living in a place where discriminatory housing is rampant.”

*** “These buyer restrictions are a lawsuit (or, more likely, multiple lawsuits) waiting to happen. The question is how much it is going to cost the City (all of us) when it is named as a co-defendant for approving the project.”

Who profits from the land sale,

What happened to concerns about Davis earth for Agriculture-

I love my seniors- but this was not well vetted!

Both of you agreeing now- I am surprised.

I am on your side, but this is a mistake.”

*** “I am or soon will be the age L claims they will serve. Not one person in my age range is interested. There is the Village Movement, I will post their link. It’s about aging where you are,

neighbors helping neighbors. In an older neighborhood near the Davis Senior Center, I know of 3 people who lived past 100, stayed in their homes, ate at the senior center, had meals on wheels. As I get older I welcome that which is familiar. A friend 15 years younger than I recently moved and said, “moving is hell, never, ever move!”

*** “I would like to see more density, more affordable homes, and more diversity, I’m voting no.”

*** “WDAAC: what a load of crap. There are plenty of infill locations where these types of facilities can be built that aren’t pristine farmland. The fact that all you can do is accuse me of not caring about seniors proves my point. It will take more than Trumpian style attacks to convince anyone to support this project. You have yet to bring up any reason to support this ridiculous measure other than “if you don’t support thus, you are against seniors”…which is, of course, a complete load of crap. Maybe we should pass a measure that holds crooked developers accountable when their products don’t perform as advertised.”

***  “If you can afford to buy a $425/sq ft home, those would start to go up next summer or fall. If you need the affordable housing that they pretend is the centerpiece of this development, that wouldn’t be available for at least 4-5 years, IF anyone decides to fund it. (source: Jason Taormino, via Nextdoor)”

*** [on the Jason Taormino/Yes on L  social media post/photo that “Pocohontas loves seniors”]:  Well, when you use terms like “taking care of our own” and do not follow through on promises to change such language AND THEN hire out of town people of color to advertise for said development (see our cities demographic of homeowners by race) AND THEN represent yourself with a culturally inappropriate costume AND THEN post a picture of said representative in the culturally insensitive costume with the statement “even Pocahontas approves” which has been a racist nickname given to a female senator who is challenging our criminally linked executive in chief, you MIGHT lose my vote. I can’t make this stuff up.

*** [on “Pocahontas”]: “I mean…. they have been accused of being racially insensitive… then they do this… at farmers market… at their tent… and then the developer shares it on his own facebook page…. talk about a political tin ear. Yikes.”

*** “The traffic is going to increase on the road to that place and is going to be very dangerous. I’ve been riding my bike out there the last few days and cars are passing almost hit me cars they’re moving me off the road so if you don’t care about people safety then go ahead and vote for L. If you think that safety is of importance maybe you should reconsider.

[WDAAC response]: “Safety? Safety is why we want to put in NEXT to a hospital.”

So when a bicycle rider is run over they have a hospital nearby to try to save their lives…. good idea.”

*** “I weighed both positions. I even signed up to get more info about WDAAC. And, I’m decided. No on L.

Just the name alone “West Davis Active Adult Community” is a major turn off. What were y’all thinking? “Yes Harriet lives in the ‘active’ adult community. George? Oh George is on the slacker side of town.”

Some of the pro L campaign videos were incredibly elitist. In this one, WDAAC featured a guy who had lived here for 68+ years. OK. But, then he breaks into really scary code-speak. “Other projects tended to pull people in from outside the community.” (the horror) “this one won’t dilute the community.” translation: KEEP IT AFFLUENT AND WHITE These houses, if approved, would market today for 550-750+K. In other words, wealthy boomers who don’t want children in their neighborhood. I can’t think of anywhere else in town I would rather not live.

The 55 and over, exclusive “Davis-connected” buyers’ clause in this housing expansion proposal is nothing more than silver turning blue haired, sanitized segregation tryna come off all liberal ‘n sh*t. 90% of a preexistent predominantly white over 55 population base x the wealthy of all populations minus children = a neighborhood that is blindingly white, rich and stagnant where people stop playing together and flowers don’t grow.

When are we going to see real affordable housing options for seniors and families with kids and solo flyers? But, especially seniors who aren’t rich. Asking for a friend.

This town just keeps getting older and paler. And more economically bipolar. No on L.”

24 thoughts on “Guest Commentary: What Are Davis Residents Saying Against Measure L?”