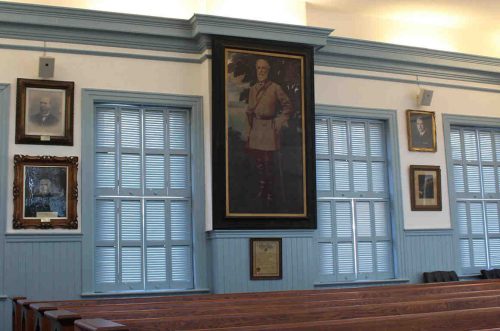 Anyone walking into the sole courtroom in the town of Louisa, Virginia, is met by an array of portraits covering nearly every square inch of the walls. Overwhelmingly they feature white men. Though on first glance, most of them are not recognizable, one is unmistakable. It’s a looming image that dominates the back wall of the courtroom, directly across from the judge. The portrait is of Confederate Gen. Robert E. Lee, in uniform, sword unsheathed at his side.

The presence and prominence of Lee’s portrait in a courthouse in Louisa County speak to the kinds of bias found in courts of law across the country, and it demands reflection on and analysis of those biases.

Since the end of the Civil War, Lee has come to symbolize a society premised on white supremacy that intrinsically promotes the dehumanization of people of color, specifically of Black people. Lee’s image and name blemish public spaces throughout the United States, but they are particularly prevalent in the former slave states of the Confederacy. When a symbol of white supremacy appears in a public space charged with the administration of justice, it visually endorses a two-tiered legal system premised on differentiating the value of lives based on race.

This warped weighing can have a particularly disastrous consequence in a case where the death penalty is on the table. In Louisa, Darcel Murphy, a Black defendant, is facing a trial for his life in the courtroom housing this menacing reminder of our nation’s legacy of racialized violence. As Murphy’s attorney argued last week, in support of his previously filed motion, he should not be forced to endure a proceeding tainted by the insidious effect of Confederate symbols, memorials,

Unless the judge grants the motion, Murphy will be tried in an environment ripe for improper considerations of race.

Racial bias is a known problem in capital cases, one clearly apparent in the pervasive discrimination against Black jurors. In studies conducted across the country, from North Carolina to Pennsylvania, a clear and concerning pattern emerges of Black potential jurors being disproportionately excluded from juries compared to white potential jurors. Even if selected for Murphy’s case, Black jurors would be forced to serve under the shadow of the portrait’s ever-present reminder that Black people in America have long faced violence for attempting to participate in civic life.

Studies have also shown that Black defendants like Murphy are already at risk that racial bias could infect their trial. Any amount of risk that a jury faced with this gravest of decisions could be influenced by a symbol of white supremacy is too high. And in a trial where both the victim and defendant are Black, any suggestion that Black lives are to be valued less, the core principle of the Confederacy, has the potential to do great harm. Communities of color are over-policed, over-criminalized, and brutalized every day in our nation, and the courts should not perpetuate this

injustice by diminishing the value of Black lives.

The impact of this portrait is not limited to Murphy’s trial. It signals to everyone who enters the courtroom, whether as participants or observers, that Louisa has failed to grapple and come to terms with this country’s painful history. Whether defendants are facing a misdemeanor or a capital charge, they deserve to have the proceeding take place in an environment free from racial bias. Louisa owes Mr. Murphy and all others who enter the courtroom the assurance that racial bias in any form is unacceptable and that an interest in maintaining the status quo does not trump an interest in the equal distribution of justice.

The judge, in this case, holds the immediate power to deal a decisive blow to racial bias by denouncing this symbol of the Confederacy. For justice to be real in Louisa County, the portrait must come down.