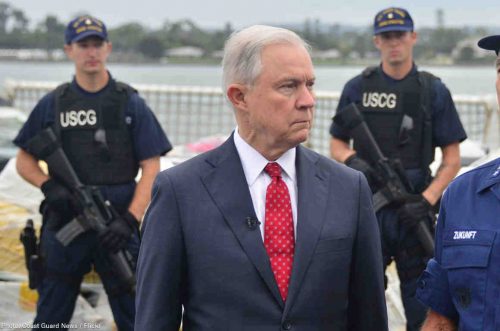 By Kanya Bennett and Carl Takei

In his final move as attorney general, Jeff Sessions last Wednesday issued a new policy that all but eliminates federal oversight of state and local law enforcement agencies that engage in unconstitutional and unlawful policing. While Sessions — a white man with money and political connections — will likely never be personally affected by this policy change, his decision to sabotage the legal instruments of federal civil rights enforcement is going to harm people and communities of color for years to come.

The new policy sets unprecedented barriers for Justice Department attorneys to negotiate consent decrees, which are court orders jointly agreed on by the federal government and a state or local law enforcement agency accused of serious rights violations. They usually require new training and policies to resolve these violations at a systemic level, with implementation overseen by a court-appointed monitor until the agency has successfully carried out the required reforms. Such decrees have covered everything from use of force to racial bias and officer hiring and oversight to basic recordkeeping.

Ever since Sessions took office, he was openly hostile to consent decrees as a “harmful federal intrusion” on state and local law enforcement authority. And his final decision as attorney general codified his contempt.

Sessions’ final policy imposes substantive limits on consent decrees — for example, limiting the scope of reforms, restricting what tools the Justice Department can use to monitor compliance with the decree, and requiring the Justice Department to end federal oversight earlier than is often needed to complete reforms. It also imposes similar limitations on other types of settlement

agreements that the Justice Department could use short of a consent decree.

These self-imposed handcuffs will make it next to impossible for the Justice Department to bring about the kinds of systemic reforms that communities of color have demanded in Ferguson, Baltimore, Chicago, and elsewhere. Reforming the embedded practices and culture of a rogue law enforcement agency often requires the adoption of a comprehensive plan that is backed up by thorough oversight and takes years to implement successfully. The Sessions policy attacks each of these elements — forcing the Justice Department to ask too little of the agency, do too little to verify that the agency is meeting its obligations and leave too early to finish the job.

Sessions’ maneuver is the capstone of his efforts to cut out the civil rights enforcement that Eric Holder, a former attorney general under President Obama, repeatedly described as the “crown jewel” of the Justice Department. It’s also part of the larger trend of the Trump administration cozying up to local officials like former Maricopa County Sheriff Joe Arpaio and former Milwaukee Sheriff David Clarke who use the badge to abuse poor people, people of color, immigrants, and communities.

Because Sessions prioritized good relations with police interests above all else — with no questions asked — members of Congress going forward must consider the integrity of every Justice Department action on policing under his tenure. Sessions’ meticulously checked the box on eliminating his predecessors’ policies to advance constitutional policing. And perhaps for no reason other than to “have [law enforcement’s] back,” as Sessions regularly declared.

Sessions started and finished with consent decrees, but his impact on policing was broader than that. And with all of the distractions and blind eyes during the 115th Congress, there has been zero oversight from the Congress on just how far Sessions’

Sessions’ “law and order” agenda eliminated or perverted Obama-era efforts to advance constitutional policing on a range of issues. His Justice Department kicked the can on collecting data on fatal police shootings despite a now four-year-old law requiring them to do so. Sessions’ perverted a community policing program known as “collaborative reform,” using it to address violent crime instead of systemic policing failures.

Despite bipartisan congressional efforts to rein in civil asset forfeiture, Jeff Sessions unleashed it, describing a “love” for it. Sessions cheered on police militarization when Trump eliminated all oversight and regulation of federal transfers of military weapons to law enforcement. And Sessions deemed the “centerpiece” of his “law and order” agenda, a War-on-Drugs-type program known as  Project Safe Neighborhoods, which the Congress just reauthorized.

With a new Congress set to begin in January, it’s time for members of Congress to conduct rigorous hearings and other oversight of Justice Department policing policies. The federal government has an obligation to ensure state and local law enforcement agencies uphold and respect people’s constitutional rights — not incentivize their violation.

Share:
Tags:ACLUJeff SessionsPolice Accountability
Previous : Letter of Thanks From Trustee Elect
Next : Commentary: Schools Made a Tough Call, Is This Really the Future We Face?