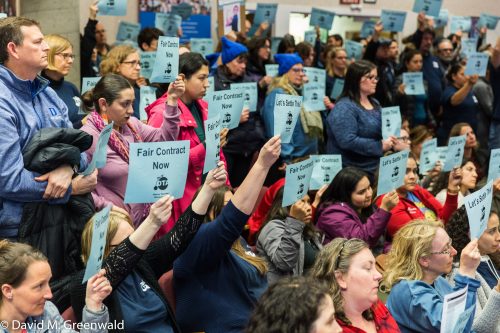 On Thursday, the school board took the first step in what figures to be a long two-year process to obtain the funding needed to close the teacher compensation gap.  The school board agreed to formally schedule an item on the agenda for the December 20 meeting to discuss the issue of a new parcel tax.  If approved, however, the measure would not be voted on until November of 2020 – nearly two years away.

Leading the way on this has been Alan Fernandes.  He told his colleagues on Thursday, “In embarking on a year long study session, I for one have become pretty resolute that in order to meaningfully close the compensation gap once and for all, do it with some degree of ‘nowness’  because this is an issue that we need to start working on now.”

He made it clear: “We need a local source of revenue.”  Mr. Fernandes said that relying on the state is “never going to allow us as a district to catch up, particularly in light of the way LCFF [Local Control Funding Formula] is structured.”

This push comes on the heels of voters approving a school bond measure by a wide margin – 72-28 in an election that required 55 percent of the vote – that will fund badly needed facilities upgrades.  But the district cannot use a school bond measure to fund instruction costs such as teacher compensation.

Give Alan Fernandes some credit – he has attempted to think outside of the box in order to find ways to pass a parcel tax.

Right now, the district has made a move earlier this year which will close some of the compensation gap, but it is largely financed through one-time monies and the only ways to get ongoing money to fund the gap is to find a way to raise local revenue.

The district is disadvantaged by the LCFF system, and as a result the district only receives about 77 cents on the dollar from the state.  A portion of that is made up by local parcel taxes, but that has proven insufficient in order to increase compensation for teachers, many of whom are strongly disadvantaged in their compensation as compared to the compensation paid in other school districts.

Alan Fernandes originally attempted a citizen-based parcel tax.  While the idea seemed intriguing, it has run into all sorts of legal roadblocks.  Mr. Fernandes acknowledged on Thursday that the

legality of whether a school district could do this was in dispute – though he believes they can.  Moreover, the citizens would place this on the ballot through the city, and thus the parcel tax would not be completely contiguous with the school district as the city of Davis does not include the voters from unincorporated sections of Yolo County that are nonetheless in the school district.

They need to gather a large number of signatures.  This initially began last June, but it was quickly acknowledged that it would not have sufficient votes to qualify for the November 2018 ballot.  They then put the effort on hold in September to focus on the passage of Measure M, the $150 million school facilities bond.

On Thursday, he acknowledged that the effort would be unsuccessful and thus would not qualify.

While I was intrigued by the notion of the citizen’s based parcel tax, I believe going the formal route of doing it through the school district itself is the better way to proceed.  For one thing, it is cleaner.  There is no question about non-contiguous boundaries.  There is no question about money going for non-educational purposes like first responders or school resource officers.  It allows the voters to make a decision – is education worth spending about $200 to $300 a year on a parcel tax?

And it forces the school district, the parents, the PTA, and the teachers to make their case to the community.  Do we need a parcel tax?  If so, why?

I like the fact that Alan Feranndes is pushing this now, two years in advance so we can have that conversation.

For whatever reason the teachers have been a bit reluctant to get on board this train.  Back last spring, the teachers pressed the district for pay increases and to close the compensation gap, but

at the same time, they gave signals that they were less than 100 percent behind a parcel tax.

A key question was why that was the case.  There was speculation that teachers may have seen asking for a tax to fund their own salaries as unseemly.  They also might have been fearful it would open them to criticism and scrutiny, and even the possibility of rejection.

This community has repeatedly, however, stepped up to support more local funding for K-12 education.  It has approved numerous parcel taxes to increase that funding, many of them by a more than 70 percent level of support and, in the case Measure M, the school bond measure received 72 percent of the vote and had no real opposition.

DTA President Frank Thomson said on Thursday, “The DTA in no way opposes this.”

He added: “Might this also be emblematic and symptomatic of the value the district places on certificated employees (teachers)? Should they not be prioritized in the district’s general fund, so that we do not need to pursue additional parcel taxes? And if we close the compensation gap with a parcel tax, will there be an effort to keep it closed, year after year?”

There will be those who will argue that we are going too high with the taxes.  That we should look at other ways to support compensation increases.  The good thing about this approach is that we get to have two years of discussion on those very points.  Put everything on the table, let’s debate and discuss, and then ultimately make the decision about what is best for this community.