A couple of recent comments stand out to me.  Last week, Alan Pryor wrote: “People change over 12 years…  David Greenwald has changed into a developer-loving mouthpiece.  Case in point – David Greenwald was also once an ardent opponent of Covell Village and the developer.”  Later he added, “In Mr. Greenwald’s case, it happens to coincide with his starting to take in tens of thousands of developer advertising dollars.”

Then yesterday another poster argued: “At this point, the Vanguard is the outright enemy of those who prefer slow growth.”

Both comments in their own way misread the Vanguard’s viewpoint but, more importantly, the changing electorate on the issue of housing.  In the first case, Alan Pryor accuses the Vanguard of selling out, switching its position on housing based on money (money which actually doesn’t exist), while in the second instance, the commenter is accusing the Vanguard of being out of step with the community that it still sees as slow growth.

In neither case is there a recognition that the community is evolving and also that the nature of housing support is fluid, not static. 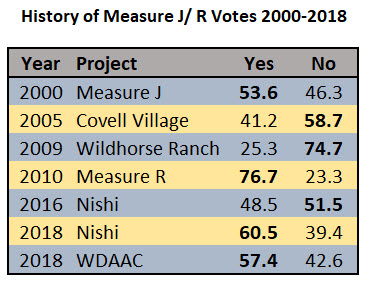 In this piece, I will argue that the community views on housing have changed over the last 13 years and the Vanguard’s thinking has changed along with the community.

In 2005, the Covell Village project – a huge 2000-unit project that would have been developed at the Corner of Pole Line and Covell – was defeated in the first Measure J contest, five years after voters narrowly passed the seminal ordinance by a relatively narrow 53.6 to 46.3 margin.

Measure J itself was the product of a long period of large peripheral housing developments and rapid growth in the city.  It became an effort to apply the brakes to what people saw as too much growth.

In that context, just a few years later came the large Covell Village.  The voters saw the 2000-plus unit project as too large, there were direct and unmitigated traffic impacts, and the voters overwhelmingly voted it down.

Like many people in the community, when I first founded the Vanguard, I saw a period of rapid expansion in Davis, a council that was inclined to support most housing projects, and I believed that we had gone too far and that the brakes needed to applied.

The result was opposition to large projects on the periphery – including both Covell Village and later Cannery – which we saw as not only large, but with the housing itself not serving basic

When the second Measure J project came along, Wildhorse Ranch – had the project come forward this year, it probably would have been a relatively easy pass.  It was not very large, it would not have had huge traffic impacts, and it was environmentally friendly and sustainable.  But it had two huge strikes against it – there was heavy opposition from the neighbors and it came along in 2009, during the heart of the economic downturn.

The result was Measure P was heavily defeated by a nearly 3 to 1 margin.  The next year, the voters, largely satisfied with limiting peripheral housing, heavily passed the renewal of Measure J, as Measure R, by an even more overwhelming margin over only nominal opposition.

Where the shifts started occurring was during the next six years.  The economy improved.  The city coming out of the recession was starting to look at economic development as a means to finance city services.  Moreover, the university began to expand and the lack of peripheral housing was starting to put stress on the housing market again.

Nishi in 2016, frankly, should have passed.  There was already a clearly defined need for more student housing.  There were three basic reasons it did not pass.  First, the voters, whether rightly or wrongly, perceived that the project would impact already congested traffic on Richards.  Second, the lack of affordable housing on the site put a number of progressive students in opposition, who otherwise would have supported it.  And third, because of this, the large number of voters for Bernie Sanders ended up pushing the project into the no side.

Measure A was the first really competitive measure, but it was not until this year a Measure R vote would pass.

While Nishi and WDAAC (West Davis Active Adult Community) would address different types of housing, we believe that voters were willing to pass housing measures, in part because they saw the housing crisis as creating a clear need for housing in Davis.  Second was because neither project offered direct impacts to the bulk of voters.  In short, the voters saw a clear need while not seeing a clear harm to their own interests.

The Vanguard thinking on housing has largely mirrored that of the community.  Coming out of the period of rapid housing and residential growth, it made sense to pump the brakes on new housing.

However, the pendulum had swung a bit too far and we were left with clear housing needs.

My point here is that if you look at things within the context of the history of Davis you will see that the change over 12 years is actually easily predictable, based on a change of circumstances and that the seeking of a conspiracy or monetary theory is unnecessary.  We simply assessed the situation and concluded that the need for housing is much greater in 2018 than it was in 2006 when the Vanguard was founded.  Many in the community agree.

The Vanguard in this light is not some sort of enemy of slow growth policies, but rather a reflection that the majority of the community now sees housing issues differently than it did a decade ago.

Moreover, those views are not static.  They can shift back if we go too far in the other direction.  For the most part, the Vanguard has been reluctant to develop peripherally.  We have supported largely commercial development on the periphery, but most of the housing that has been approved has been multi-family housing that is infill.