Right before Thanksgiving, the Social Services Commission took up the 3820 Chiles Road project.  For the most part the response was positive as many see the need for the city to develop workforce housing – a need that this project squarely seeks to address.

However, there has been mentioned concern about the conversion of the project away from commercial zoning.  Last week, we ran an analysis based on the EPS report that found that the property was inappropriate for adaptive reuse or R&D uses.

For some this might appear to be at odds with the city’s need to develop R&D space at an Innovation Center.  One of the important things to remember is that when Lawrence Shepard purchased this property, it was his intention to keep with current usage and indeed keep the existing building.

UC Davis after twenty years of use had an option to purchase the property outright, but declined citing it’s isolated nature from other parcels.

As the EPS report concludes, “one reason the site is not viable for office/R&D/Flex development is that it is not located in a larger innovation or research park or district, such as the Interland Research Park (Now University Research Park) or along 2nd Street.  The City will be better able to attract new office/R&D/Flex users in available space in these existing or new innovation park/ districts.”

It is important to understand this point – because it is the main driver not only for residential development at this cite, but also for the overall innovation strategy that the city first started undertaking with the Innovation Parks Taskforce and the 2010 Studio 30 report.

The MRIC report in 2015, reported, “as of May 2015, there are approximately 153 net acres remaining within 32 properties…” that are zoned for commercial use.   What the developer here found is that most commercial interests are simply not interested in developing a 5 to 7 acre site for R&D.

Instead they found “R&D and office tenants prefer to co-locate with similar uses and with service providers in a “campus” environment.” 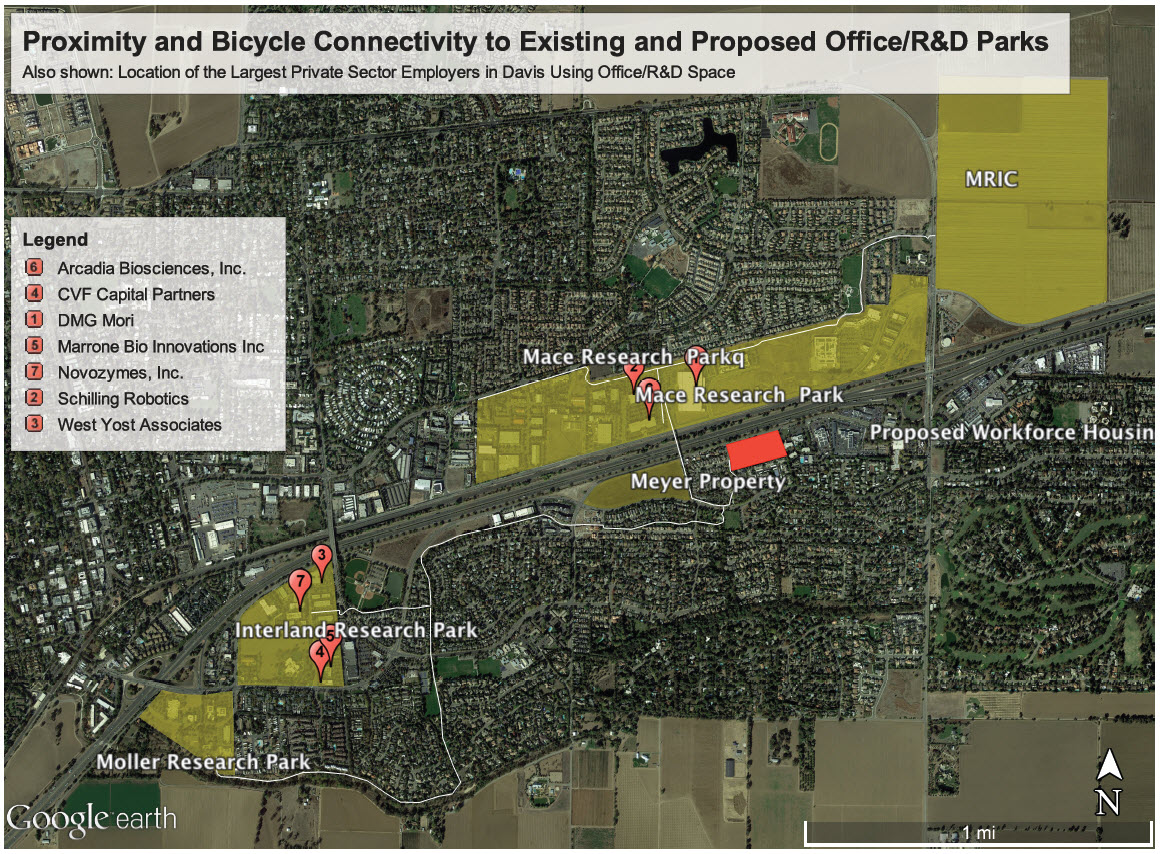 This map really demonstrates the city’s innovation strategy in a way that written description cannot.  What we see on this map is really an emergence of an Innovation Corridor in Davis.  Indeed had Nishi been approved in 2016, we would see the line of innovation space extending even further to the southwest.

As it stands right now we see the Sierra Energy/ Area 52 research park that is in various stages of development.  That is followed by what is now known as the University Research Park.  There is a long innovation corridor along Second Street which includes among others Schilling Robotics and DMG Mori.

And then we can see it extended beyond Mace Blvd. should MRIC re-emerge next year as a project proposal.

The only other somewhat large possible property for R&D space is the “Meyer Property” which is located along Chiles south of I-80.  This was put forward as a potential location for a Business

Park/ R&D space a few years ago but the proposal fell through.  This was the proposed Panattoni development in 2015.

They were proposing to develop the just under 15 acre site with between 150,000 and 225,000 square feet of new Class A office, lab and technology space on the site.  That site remains the largest undeveloped site with the city currently approved for development.

The problem however facing the city is that while it does have 153 net acres on 32 properties – those properties are scattered and most are less than five acres.

In some cases you can question how much effort a given developer put into developing the site for current use.  In the case of 3820 Chiles, they spent a few years.  They went as far as to bring in Barry Broome from Greater Sacramento hoping to attract a big time occupant and it just didn’t work.

The developers at Chiles made a concerted effort to develop the land as R&D space after UC Davis declined the option to buy due to its isolated nature.  They learned quickly – and their knowledge is backed by the consultant report – that the land is too small to really host R&D.

So they pivoted and worked on a concept to bring workforce housing into Davis.  As the map demonstrates, the focus on commercial should on these larger parcels along the Innovation Corridor.  But Davis has other needs as well.

The University Research Park proposal provides us with a good example of the need for housing in conjunction with R&D development.

Jim Gray and Dave Nystrom made this point with regards to their proposal for mixed-use workforce housing within the University Research Park.

As Mr. Nystrom explained, “one of the challenges (businesses in the park) face is hiring people because it’s so difficult to find housing in Davis.  People I think have an expectation that if they’re

going to work in Davis, they’re going to live in Dixon or Woodland or West Sacramento because the housing market is just so tight.”

I think many people have a misperception for housing commercial development works.  Companies for the most part do not simply look for available space and move in.  They have to often be recruited.  They are looking for the right environment and one concern of theirs in determining whether they should pick one spot over another is the question as to where their employees are likely to live.

To put it simply, why would a company come to Davis if they are not convinced their employees can live here in town when they have other locations with better housing options for their employees?

As such, 3820 Chiles might not be the best location for R&D space because of its size and somewhat isolated location, but it is relatively close to places of work for employees and can serve that clear need in this community quite well.

In short, the applicants at 3820 Chiles believe that while the property is not large enough for R&D, it can house higher density workforce housing – something it seems most feel we desperately need.

The city who has just brought back Ashley Feeney as Community Development and Economic Development Director, can focus on the larger parcels to try to find companies to fill our commercial needs, but we also have a need to figure out where to house these individuals – 3820 Chiles would serve as one such location.

44 thoughts on “Analysis: The Need For Workforce Housing Versus Commercial Space”