SACRAMENTO – It was like a ghost town here Tuesday at Sacramento’s main downtown courthouse, which is usually jammed with scores of defendants, jurors, lawyers and witnesses, sometimes neck to neck – but Tuesday morning it fell almost deathly silent as courthouse workers walked out on strike.

A strike was always possible because Sacramento Superior Court employees – courtroom reporters and account clerks – have been forced to work without a contract since September. But it still felt like a near “wildcat action” by United Public Employees members.

And it was effective. Not just at the main courthouse but the other county courthouses, including the main jail courthouse, small claims/infractions Carol Miller Courthouse and the William Ridgeway family courthouse.

Pickets started at near dawn at most courthouses, and then workers massed at the main courthouse downtown in late morning – complete families, with kids in strollers, blanketing the streets.

As hundreds crowded into the fountain area just in front of the security entrance, Sheriff deputies had to push the strikers back to sidewalk. But there were no arrests – after all, the courthouse clerks and deputies work together, usually, every day.

According to UPE’s director Ted Somera, virtually all of UPE’s 400 members walked out Tuesday – UPE claims about 400 of the 600 Sacramento Superior Court employees.

“As all Sacramento residents know, the cost of living and rent in the region are only going up and as a result our workers are struggling to make ends meet. Unfortunately, our employers, the 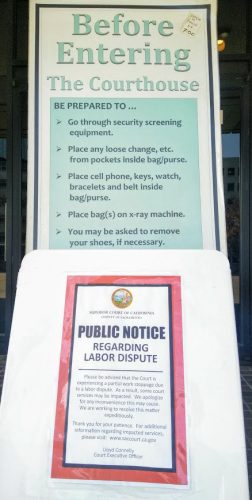 Judges of Sacramento Superior Court, who make well over $200,000 in total compensation, do not care….

“To add insult to injury, judges received a 4% raise last year and an additional 3% increase in salary this year! However, they offer us less than the projected cost of living for next year and the following…the court has spent millions of dollars over the past few years on IT case management systems which as of today amounted to increased workload and NO functioning case management system! ENOUGH IS ENOUGH!” continued UPE.

The union then asked for people’s “understanding and your support. Join us for a few moments in making enough noise to reach the judges who decisions determine our future just as their decisions may affect your future.”

UPE members repeatedly told the media they didn’t want to strike but were forced to do so because of growing inflation.

Sacramento Superior Court spokeswoman Kim Pedersen said the courts would stay open, but it did not appear to be that way all, at least at the downtown courthouse.

Jurors were sent home, courtrooms were dark, cases were being continued, sometimes as far out as February 2019. The parking lots were graveyard-like, and the hallways totally empty.

And the  Vanguard has learned at least one case lost a defense attorney – she quit her client’s case because of the anticipated delay. In some cases, the potential exists for some defendants’ cases to be dismissed because they may not be brought to trial within a statutory time period.