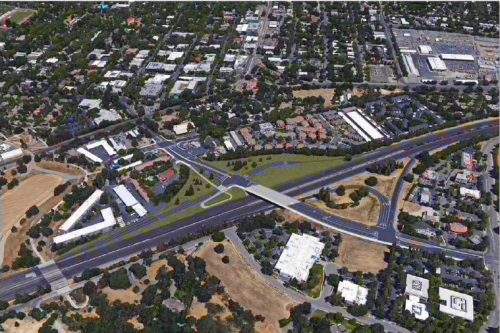 Over the years, the city of Davis has attempted a number of fixes to the perpetual problem of traffic flow through the narrow Richards Corridor into the south end of the downtown.  In the late 1990s, it attempted a ballot measure that would authorize the widening of Richards Blvd to four lanes.

The problem with that approach is that you would basically empty the large volume of traffic onto two lane surface streets that were not built to handle that kind of volume.  In short, you would simply transfer the choke point for traffic from outside of the downtown to inside of the downtown.  That was not a great solution, and the voters rejected it.

The best solution that I have seen was the plan that emerged during the Nishi 1.0 discussion.  The developer of Nishi was going to put $23 million of that money toward infrastructure improvements.  A lot of that would go to the grade separated crossing to gain access to the UC Davis campus, but a portion would widened West Olive Dr and allow a bypass of the Richards Tunnel and divert traffic directly onto campus.

However, the voters in 2016 narrowly voted down Nishi – and in part because of traffic concerns despite what I always believed would be a permanent fix to the problem of the Richards Tunnel – because if you track the heavy volume of traffic in the morning, most of it is flowing to campus.

At the same time, the city was going to be responsible for the last $10 million of the funding needs to fix the Richards Blvd/ I-80 freeway interchange.

The city of Davis will finally have the money needed to complete the I-80/ Richards Blovd Interchange Improvement Project that the city has been seeking to achieve for years now.   They are receiving about $5 million from SACOG to make this possible.

With the $5 million for the Richards Blvd Improvement Project, the city will be able to add a grade separated Class I pathway under the westbound I-80 onramp to improve bicyclist and pedestrian safety between Research Park Drive in South Davis to First Street in Downtown Davis.

The city will then be able to reconfigure the Richards Boulevard westbound I-80 ramps from a cloverleaf to a tight diamond to create additional intersection spacing with Olive Drive.

The city plans to signalize the Richards Blvd exit from westbound I-80 to improve the flow of vehicles merging with vehicles already queued on Richards Boulevard at the Olive Drive intersection.

Finally, the city will officially close the Olive Drive exit from westbound I-80 to prevent vehicles from using the exit as a thoroughfare to improve safety in the Olive Drive neighborhood.

A separate grant that could be awarded as soon as January could fund an overcrossing between Olive Drive and the train depot.  This would finally reconnect Olive Drive after Union Pacific built the fencing back in 2011.

City Manager Mike Webb told the Vanguard that the $5 million will pay for just under half of the construction of the interchange.

“The project construction cost is estimated at around $11m, and we have already expended some funds for design and environmental review,” Mr. Webb explained.

The city should have the rest of the money coddled together from impact fees from various development projects including Lincoln40, Nishi, and the hotels.  In addition, there is money from RDA bond proceeds and $500,000 from UC Davis as agreed to in the recent MOU.

Make no mistake, this is really good news for the city.  Aside from the issue of the tunnel which is too narrow and the back flow onto the narrow surface streets, creating a more sensible freeway

exit configuration will be extremely helpful.

Right now particularly traffic from west bound I-80 exits onto Richards Blvd with that traffic merging at a mesh point that brings together bikes, pedestrians, buses and vehicle traffic into a single confluence.  By changing that configuration, a dangerous merge will be averted.

In addition, closing down the I-80 exit on Olive Dr is something the city has longed to do for many years.  That changes the nature of Olive Drive from a freeway access point back to a residential street and will reduce greatly the number of vehicles that drive down Olive and empty onto Richards Blvd.

But what it doesn’t do is what Nishi version 1.0 originally did – take the traffic headed to campus and divert it directly to campus prior to heading into downtown through the Richards Tunnel.

Currently Nishi 2.0 which passed overwhelmingly by the voters in June is caught up in litigation.  Once that litigation is resolved, they will build the roadway through which may accommodate emergency vehicles and buses through the grade separate crossing onto campus.

Why not revisit this issue in five to ten years.  By that point most of the infrastructure will be place, and the city could simply look at another grant funding to open the connection to through traffic and improve the roadway at Olive Drive to accommodate the new flow.  It would take a new vote of the people, but down the line they might not see as problematic as they did in 2016.

To us that is the only way really fix Richards Blvd.  Widening the tunnel really doesn’t solve anything unless you build First St to accommodate the higher flow of traffic.