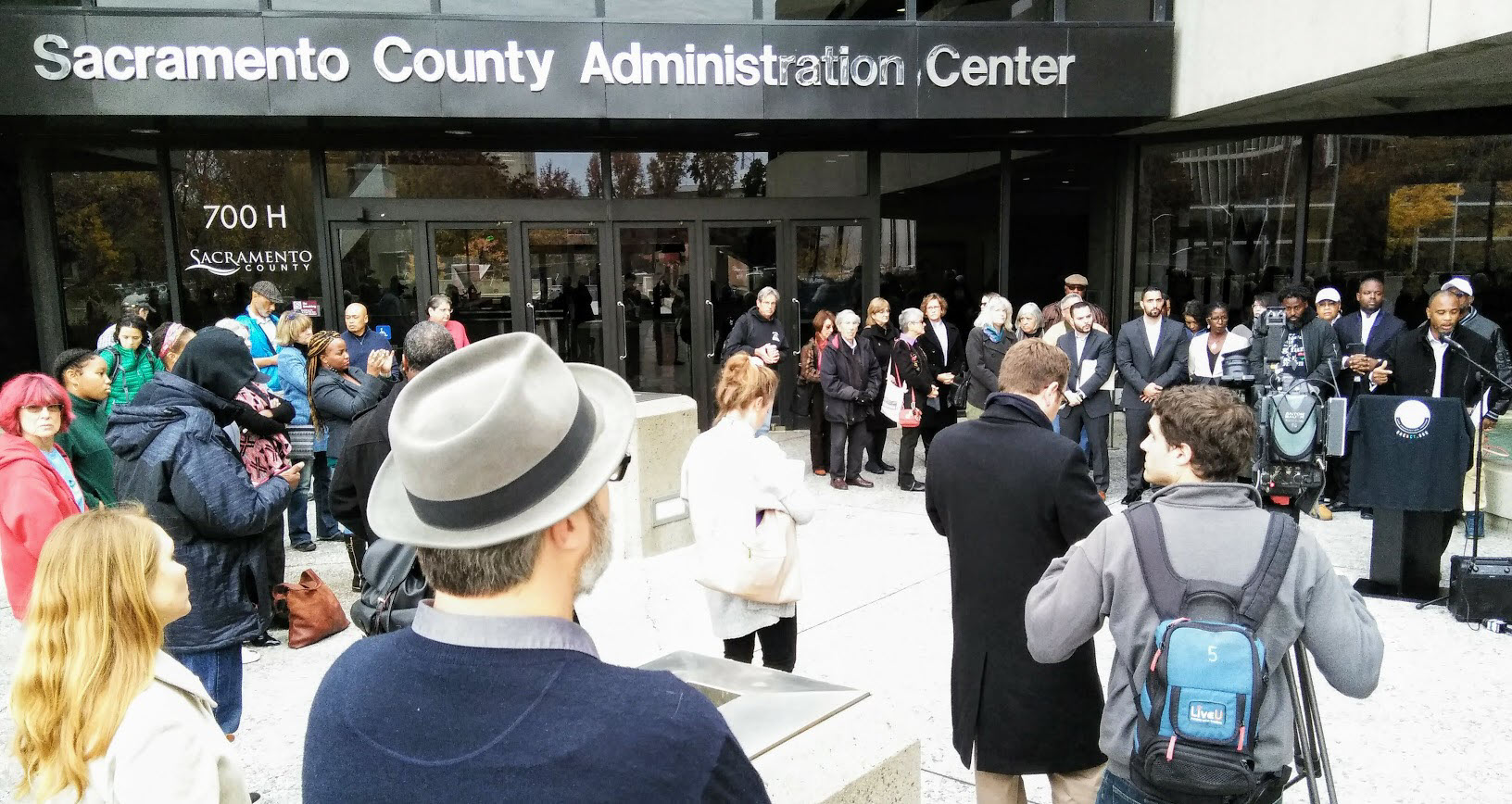 SACRAMENTO – In a dramatic rebuke of the Capital City’s sitting and controversial Sheriff Scott Jones – re-elected just this past June – the Sacramento County Board of Supervisors voted unanimously Tuesday evening to strengthen an Inspector General position to monitor the Sacramento Sheriff’s Office.

The vote came before a crowd of nearly 400 people – the majority appeared to support the IG recommendation despite unusual efforts by the sheriff to rally his base by publicly calling for “law enforcement supporters” to attend the hearing. Almost half of the spectators signed up to speak during the almost five-hour Tuesday afternoon-evening meeting. Most appeared to oppose Jones, or at least support the IG position.

In the end, after all the speech-making, more than a few catcalls, boos and some near fireworks just outside Supervisor Chambers when alleged “fascists” were “encouraged” to leave the building by a crowd of demonstrators, the supervisors approved the continuation of the IG mandate, with stronger controls so that Jones, or any sheriff, could not prevent them for doing their oversight task.

Sheriff Jones ended the tenure of the last IG – former Sacramento City Police Chief Rick Braziel – when he literally deactivated the key to Braziel’s office after Braziel published an August report critical of deputies who killed an unarmed and overwrought  Black man (Mikel McIntyre) after McIntyre allegedly hit a deputy with a rock and was running away. He was shot in the back seven times.

Braziel questioned if deputies needed to use deadly force, rather than some other nonlethal means, against an unarmed man running away and more than 100 feet distant. Jones complained, but that report is exactly the job of the IG – to provide insight after such incidents to better help the department develop new policies, said supervisors.

Jones locked Braziel out of his office and four hearings later the supervisors Tuesday reasserted their power by fortifying the IG position.

“This is community and board driven…it takes out the Sheriff’s involvement. It reserves the board’s subpoena power, requesting involvement of attorney general, litigation and the grand jury (and) access to personnel records, for issues including, but not limited to excessive force. It’s an important first step, but not the end,” said Supervisor Patrick Kennedy, who authored the amendment to the IG policy.

In short, the “scope of work” statement takes the Sheriff completely out of the equation. Previously, the IG could investigate excessive force and other resident complaints at the Sheriff’s request and the Board’s request. Now, the IG responds to the county executive and board of supervisors.

Additionally, Kennedy’s amendment now notes that the “Board of Supervisors reserves the right to ask, by a majority of the Board, for an outside investigation and/or review of such incidents and findings by the California State Attorney General.”

And to presumably avoid another IG from being shut down by the Sheriff, the new language states “The Sheriff’s Department and all other County departments shall cooperate with Contractor, provide access to County facilities, and promptly supply any information or records requested by Contractor, including confidential peace officer personnel records, inmate medical and mental health

records, and protected health information of inmates necessary for Contractor to carry out his / her duties.”

The stronger policy also asserts the power of the supervisors, noting if the Sheriff “refuses or fails to comply with an order or request for information from (the IG), the Board of Supervisors reserves its rights under Government Code § 25170 et seq. to exercise its subpoena authority or ask for a Grand Jury investigation.”

Supervisor Joe Serna, who has had a very public battle with Jones on this issue, emphasized “We’re here because of the Sheriff’s unilateral action (locking out the IG). We wouldn’t have gotten to (this) point (without that). We’re learning as we going….we haven’t had a Sheriff give us this test.”

Serna ultimately convinced the rest of the supervisors Tuesday evening to amend the policy language in a few weeks with a memo of understanding to be agreed upon by the Sheriff that would “prevent the Sheriff from impeding the IG from visiting excessive force crime scenes (or) be locked out of jails or doing whatever the IG is supposed to do.”

Many, many speakers over the hours-long hearing took pointed jabs at Jones, who spoke first to the Board and admitted he did support an Inspector General, but only “if properly chosen.” Because of the IG issue, Jones said he’s been called “rogue, a dictator, a mini-Trump.” Someone yelled Jones that he was also racist…Jones nodded and said “Ok, racist, too.”

He went on to list what claims are achievements of his department, including a racially mixed staff, low crime rates and “quality” public safety. “By what metric are we failing?” asked Jones.

To that question, the public, at least most of them, gave him an earful, for hours.

“If I chased down someone who threw a rock at me, and then shot him in the back, I’d be in jail,” said one elderly speaker, a military veteran of two wars, in reference to deputies who fired nearly 30 shots at a fleeing unarmed McIntyre in 2017.

And Tanya Faison, an organizer with Black Lives Matter Sacramento, fired off a list of inadequacies of the Sheriff and his department in addition to killing Black suspects, including being “linked” to neo Nazi groups, forcing jail inmates to bathe and drink toilet water, using a “Stingray” spy device to monitor cell phones without a warrant and paying out $17 million or more in excessive force lawsuits.

Most speakers focused on a few points – lack of transparency by the department and Jones (deputies don’t wear body cameras and Jones rarely releases dash cam footage), and accountability.

“Oversight does not equal politicization, control or micro management. We can both support law enforcement and want oversight. The actions of Scott Jones are beneath the Scott Jones I know,” said Eli Roth, a lawyer and former law school professor of Jones.

“Scott Jones agreed to the existing oversight contract and ran for reelection with it in place. If he had legitimate concerns about how the contract was being implemented, he should have brought those concerns to this board and a public process. Instead he chose to unilaterally cut off or information with no public process. His actions on this issue have been disrespectful to the voters, the contracting prices, the IG, and this board,” said Roth.

And one woman, who said her son was killed by law enforcement in 2016, summed up the feelings of many attending when she suggested that the department needs a “social enema…to clean it all out.”