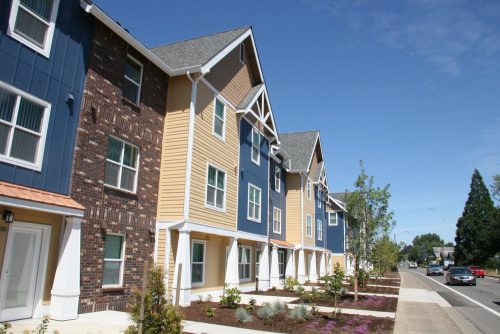 In recent weeks I have seen the terms “left” and “right” used at times to describe positions in local politics.  While I understand that temptation, I continue to believe that those terms are misapplied.  After all we are talking about a community where more than 75 percent of the voters voted for the Democratic President in the last three national elections – everyone is to the left of center pretty much.

It is a reasonable question as to where to situate growth and housing issues on the local political continuum, but I also think there is a problem with doing so – the key question is not so much where one ends up on the issue of housing, but how one gets there.  After all, relatively conservative developers may find common cause with some of the most progressive folks in town.

To illustrate this point, I will look to former Mayor Robb Davis and future Mayor Gloria Partida – two of the more pro-housing members of recent councils but without any doubt two of the most progressive.

During his tenure on council, Robb Davis was a strong proponent of housing while on council.  He also pushed for the city to adopt a $50 parcel tax to fund both homeless programs and an affordable housing fund.

He pushed this idea from left.  At the Vanguard’s student housing townhall meeting he challenged its citizens on their reluctance to support new housing projects to alleviate student pressure on the rental market. “You cannot call yourself a town that cares about the environment if you push people (out of their homes in Davis) and into cars (to commute from other cities instead),” he argued.

He argued that “a portion of that $50 parcel tax could go to a fund which is a continued housing trust fund to ensure we don’t lose the stuff we have.”

Gloria Partida finished as the top vote-getter in the June 2018 election for city council.  She finished first despite openly questioning the city’s land use policies even Measure R which she called “a

On the one hand, she said, “It has defended the city from rampant growth, sprawl and poorly envisioned design.”  On the other hand, “At the same time it has driven housing prices up and changed the whole character of who is able to live in Davis. No longer can generations of Davisites grow legacies of future homeowners. No longer can UCD students stay as young adults or return with families.”

After winning, she told the Vanguard: “I think it’s ironic that Measure R was put into place because we wanted to preserve what we had in Davis, but what it’s done is it has changed the demographics, so that the people who are now living here are the people who can afford to buy here, and they’re not from here.  They don’t feel the same about preserving slow growth.”

Two of the more progressive leaders in Davis have taken up the mantel of more housing, affordable housing and addressing the homelessness.  Does that make them more conservative than others in the community who are fighting against housing proposals and fighting to preserve the status quo in Davis.

I think we have to ask a critical question – who benefits from the status quo?  This is not a question most people in this community want to have to deal with because the status quo in the end preserves privilege and prosperity while putting up barriers to new housing.

It locks in a high cost of housing that prevents people of more modest income from moving into town.

This is the privileged left of Davis – they are left on national issues, they will come out an oppose Trump, they will say the right things about justice, but as one person told me, they “are disdainful of the working class and will abandon their liberal values as long as they can remain comfortable.”

This is what I called upon the founding of the Vanguard in 2006, the dark underbelly of Davis – the veneer of progressivism that covers a deep-seated tide of privilege and elitism.

As I have noted in the past, this is nothing new.  Writing in 1987,  UC Davis sociology professors John and Lyn Lofland called this “lime politics.”   Davis’s reputation as a progressive city, they argue, “grows out of a more than a dozen years of well-publicized municipal activities.”

The professors conclude, “the political life of the city of Davis, California, progressive political culture is composed almost exclusively of a green orientation.”

Go beyond environmentalism and while I still believe this community is changing slowly over time, the currents run against progressive leanings on issues like class, race, and by extension housing.

Who benefits from the status quo?  Those who already live here in town.  Those who purchased their homes when they were a fraction of a cost they are today.  And those who can afford to pay the inflated amount to purchase a new home.

Who doesn’t benefit from current Davis growth policies?  The poor and middle-income people.  People who do not own homes.  People of modest means.  People of color.

So how is it that you can characterize people who wish to conserve the status quo and limit growth as being on the left and characterize those who wish for there to be more housing for low income, families, the workforce, etc. as being the people on the right?

Over the next few years, the shape of Davis will start to take shape once again.  There are three critical issues that we will need to address – these are not in chronological order.  First we will address the issue of Measure R which for the last nearly 20 years now has acted as a brake on proposed peripheral development.

Second, we will address the issue of the downtown and whether we maintain the current version of the downtown where retail is leaving, where we have low density one- and two-story buildings and limited residential housing.  The question will be whether we maintain that current version or we go to a more dynamic urban version with mixed-use and economic revitalization.

Finally, we will address the issue of economic development.  Do we continue with our relatively low per capita sales tax revenue or do we move more in the vision of economic development – where we spin off university research to bring in high tech startups and mid-level companies, generate jobs and a new future of Davis.

As we evaluate these and other proposals, we need to ask ourselves – what is the status quo?  Who is it benefitting?  And what would happen if we start to shift our thinking?

Share:
Tags:Affordable HousingGloria PartidaHomelessnessHousingMeasure RRobb Davis
Previous : Sunday Commentary: If This Was A Normal President He Would Be Done For
Next : Closing Arguments Delivered in the Moore and Kenney Possession Trial

69 thoughts on “Sunday Commentary: Who Benefits from the Davis Status Quo?”