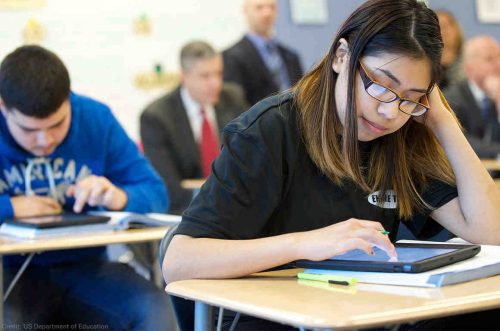 On Tuesday, the Federal Commission on School Safety issued recommendations that it claims will help makes schools safer following the mass shooting in Parkland, Florida. But at the center of the report is a proposal that will endanger millions of public school students, especially students of color and students with disabilities, by reversing federal guidance intended to address racial disparities in school discipline. Doing away with the guidance will weaken federal civil rights protections at a time when the Government Accountability Office reports that Black K-12 students receive punishments that are overly severe and frequent in schools across the country.

Following Parkland, the Trump administration faced massive protests from student activists calling for gun control measures. The administration established the Federal Commission on School Safety in response to the demands for action from across the country and appointed Education Secretary Betsy DeVos to chair it. But rather than grapple with students’ demands, the commission has pushed the false narrative that schools can be protected from mass shootings by rolling back civil rights protections for Black and brown students and students with disabilities.

The commission has placed blame on the school discipline guidance issued by the Departments of Justice and Education under the Obama administration in 2014 to address the nationwide problem of students of color receiving harsher punishments than their white peers for the same infractions. The commission claims that this guidance “endangers student safety,” despite the lack of any evidence linking civil rights protections for students of color to school shootings.

Rather than “overreaching,” as the administration claims, the school discipline guidance simply provides educators and students with clarification of long-standing civil rights laws and reminds schools of the need to avoid and repair discrimination in the application of school discipline. The guidance was developed in light of a substantial body of academic research detailing the

disparate discipline of youth of color as well as the government’s own investigations, which included findings of “cases where African-American students were disciplined more harshly and more frequently because of their race than similarly situated white students.”

The final analysis from the Departments of Justice and Education: “Racial discrimination in school discipline is a real problem.”

The school discipline guidance is also part and parcel of a comprehensive, bipartisan movement to reform the ways in which schools address discipline to reflect what we’ve learned from decades of research. Research and statistics show that the “zero-tolerance” approaches to student conduct that flourished in the 1990s and early 2000s were counterproductive. Increasing punishments, removing kids from school, and referring them to the juvenile justice system led to higher rates of recidivism and an increased chance of involvement with the criminal justice system as an adult — all at a huge cost to the state, children, and their families.

New scientific research about adolescent brain development provides an understanding of why zero-tolerance doesn’t work. As any parent knows, children are prone to make mistakes and to challenge rules set by grown-ups. This is actually part of the process of learning good decision-making skills. But unlike adults, adolescents’ brains respond best to immediate and positive inputs and do a poor job of comprehending far-off or negative consequences — like punishment.

Education researchers and dedicated teachers and administrators have developed many approaches to school discipline that rely on positive support and intervention techniques, rather than escalating punishments, to improve outcomes for students, teachers, and schools. The Department of Education has invested in assisting school districts across the country to implement best practices in school discipline. The school discipline guidance is part of a range of resources on Rethinking School Discipline, including

We’ve known these recommendations were coming, even before the commission began its work. When it was created, it was tasked with a starkly worded objective: “Repeal of the Obama Administration’s ‘Rethink School Discipline’ policies.” We’ve also been well aware of the hostility towards civil rights protections exhibited by the commission’s chair, Education Secretary DeVos, who has demonstrated an aversion to enforcing the Education Department’s civil rights policies or even acknowledging that systemic racism exists.

The call to rescind the federal school discipline guidance is not grounded in a sincere effort to protect student safety. Fair, evidence-based approaches to school discipline promote safe and healthy schools, and there is no evidence linking school discipline reform to school shootings. Schools should continue their legal obligation to administer discipline in a nondiscriminatory way and develop the right alternatives to exclusionary discipline.