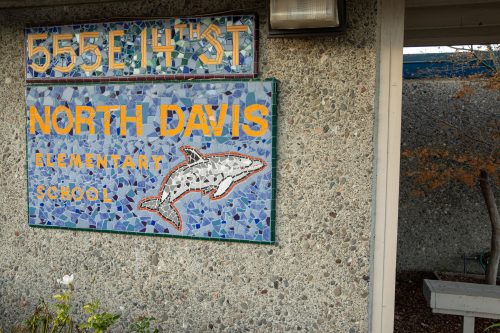 Mary Ellen Dolcini was a great person, she was a great principal at North Davis Elementary School and she certainly is deserving of being honored by this district and is certainly not deserving of having her name be in the center of a controversy.  But unfortunately, that is where we are today and it really has nothing to do with here.

The cardinal rule of local politics is when you want to make a change the first thing you do is you meet with the stakeholders and take their temperature. That did not happen in the case of North Davis Elementary.

The bigger policy question is that this is not the first massive misstep by this district administration.  Last spring they fumbled the hiring of the new Principal at Davis High School.

They announced the decision to hire outside candidate Lee Fleming as new principal, 70 teachers showed up outside the district offices the day after the announcement.  Ms. Fleming, having seen that she did not have support of the teachers, withdrew her name from consideration and the district hired the person the teachers wanted Tom McHale as the new principal.

That messy situation could have been avoided had the district – in this case they reached out to the teachers, but didn’t really listen to their concerns or what they

In the case of North Davis Elementary school – they failed to even do that much prior to going public.  This was a big mistake.

When I first read about the proposed name change of North Davis Elementary, I didn’t think much about it.  I never attended NDE, my kids do not go there, so I don’t have much of a connection.  Plus I knew Mary Ellen Dolcini and members of her family and she seems as worthy as anyone of being honored.

However, I assumed that the district had actually gone through some sort of process.  That’s not what happened.

What happened was an outside group that had no real connection to the school recommended the name change.  There is nothing particularly wrong with that, but they didn’t talk to the current teachers, students and parents either before proposing this change.

Like me, when the teachers first heard of the proposed change, they originally did not think that much of it. They figured this was a proposal and it would go through a lengthy process. Instead, they were stunned to learn how quickly it was moving forward.

This is the crux of the complaint from teachers I spoke with – the speed with which this was proposed, and the seeming lack of process.

Obviously this isn’t just a process issue – but the lack of process contributed to the frustration because the parents and teachers I spoke to all feel that the name North Davis Elementary is itself important.

The teachers felt like they already have a thriving community under the name of North Davis Elementary or NDE. “We’re North Davis – we are proud of being here,” one of the teachers explained. “Your name is part of your identity.”

“There’s an emotional attachment,” the 5th grade teacher said. “It just seems like this community is so much more than naming this after one person.”

They were emotional, this was an issue that hit close to home and the district’s process did not take any of this into account.

night – they will announce that the proposal has been table, they will then either withdraw the proposal in its entirety or they will have a committee or a prolonged process look into the name change.

That is fine.  But my point is that there is a broader issue here and that is that the lesson of Local Politics 101 is that you don’t make changes without vetting them first.  A community group has the best of intentions, but they are not on the ground at the school and taking the pulse of that community.

I go further.  They need to have process for making changing in the school district.  Just as the city has a process by which stakeholders are briefed in public meetings well in advance of new projects, the district needs to have a similar process for changes that will impact specific school sites.

Again, the unfortunate thing is that a truly great person, worthy of honor is getting caught up in this situation.  Her family has long been prominent in this community and they did not need to be dragged through this.

This could’ve all been avoided had the district prior to having a consent agenda item on the school board agenda followed a simple process for alerting the stakeholders first, getting a read and then proceeding.  They would have realized quickly that there was a lot of pushback and reluctance to this kind of change and slowed things down.

It may even be the case that had they proceeded correctly the first time, the community would have been more receptive to the change.

What is clear is that the district needs to do better at vetting these proposals before it ends up with major blowback.  If I am the school board after navigating this current crisis, I am sitting down to figure out how to avoid the next one.