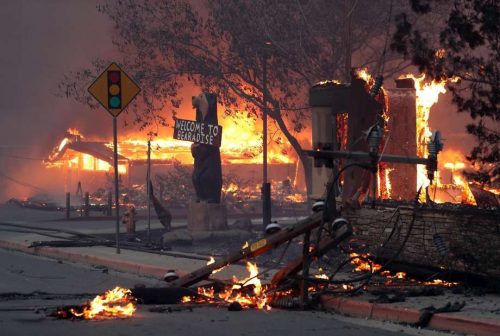 A US District Judge, William Alsup, has ordered PG&E to determine if it played any role in the deadly Camp Fire – which killed 88 people and destroyed nearly 14,000 homes, nearly completely destroying the city of Paradise.

Judge Alsup asked the Attorney General’s office to identify potential criminal offenses the utility might have committed if it were determined that “any recent California wildfire” was “started by reckless operation or maintenance of PG&E power lines.”

In an interview with the LA Times, Laurie Levenson, professor at Loyola Law School, said the severity of charges the utility faces depends on whether it was “on notice of the risk that their equipment may start the fires and lead to deaths.”

“Callous disregard of that risk could be murder,” she said. “The more likely charge would probably be involuntary manslaughter, which requires criminal negligence…. The real key here is how much risk they realized they were taking and why they took it.”

It sounds good if PG&E is found criminal liable, but what it is means is less clear.  For instance, the company executives do not face personal jail or prison time.  However, they can be fined and “debarred from contracts.”  In essence, PG&E could face a corporate death penalty.

offenses that would relate to vegetation and power lines to felonies for starting a fire or implied-malice murder.

The Bee reported that Butte County DA Mike Ramsey has not determined whether they would file criminal charges against PG&E even if an investigation by the Department of Forestry determines they are at fault.

The AG’s office briefing is based on theoretical lability if it is determined that PG&E is at fault, it does not make a determination whether the utility was the cause of the fires.

But criminal proceedings are not the only risk PG&E faces.

In early December it was reported that there have been at least 20 lawsuits filed against PG&E.  They are accused of allowing its equipment to spark the blaze.

One of the suits lasts a corporate culture that allegedly places “reputation above public safety” along with advertising that “promotes a false and misleading picture” of Northern California’s electricity supply.  It charges that PG&E had a “callous and despicable disregard for the safety of California communities.”

“Rather than spend the money it obtains from customers for infrastructure maintenance and safety, PG&E funnels this funding to boost its own corporate profits and compensation,” another suit states. “This pattern and practice of favoring profits over having a solid and well-maintained infrastructure that would be safe and dependable for years to come left PG&E vulnerable to an increased risk of a catastrophic event such as the Camp Fire.”

“Despite its own recognition of these impending hazardous conditions, on the day of the Camp Fire’s ignition, PG&E ultimately made the decision not to proceed with its plans for a power shutoff,” the lawsuit states.

Meanwhile PG&E has admitted that they might be to blame.  In a document filed in November with the Securities and Exchange Commission the company acknowledged “its equipment may have sparked the Camp Fire.”  However, they did not offer specifics about the problem.

For the AG’s office, “Determining PG&E’ s potential criminal liability, if any, for recent wildfires would require an investigation into the cause or causes of those fires. If PG&E caused any of the fires, the investigation would have to extend into PG&E’s operations, maintenance, and safety practices to determine whether criminal statutes were violated with the requisite mental intent.”

There is no question that PG&E has legal trouble mounting here.  They could be facing billions in lability from civil suits.

There are also questions as to how much lability they would have here.  For instance, an attorney who filed one of the suits noted that they did not use insulated lines, and had they done so, the fire would have never happened (at least in his opinion since the determination has not been made).  However, he acknowledged that the lack of insulation “is the industry norm.”

The Camp Fire is also only the latest in a series of events.  For years, PG&E has been criticized for failure to oversee their transmission liens and other equipment.  PG&E is being sued over the fires in the win country last year said, “PG&E recognizes they have an aging infrastructure.”

The Bee noted earlier this year, that separate from the Camp Fire, “PG&E faces billions in claims for the wine country fires, which killed 44 people in October 2017. Cal Fire has cited PG&E equipment problems for 16 of the wine country fires; it has yet to assign a cause for the Tubbs Fire in Santa Rosa, the deadliest of the 2017 fires.”

On Monday, PG&E acknowledged that its potential role in the recent wave of fires “could create fresh legal problems for a company already on criminal probation following a natural gas pipeline disaster.”

“If it were determined that a wildfire had been started by reckless operation or maintenance of PG&E power lines,” PG&E attorneys told the judge, “that would, if the specific circumstances gave rise to a violation of federal, state, or local statutes, implicate the requirements” of the probation judgment, “which provides that while on probation, PG&E shall not commit another Federal, State, or local crime.”

Still, it remains unclear what additional potential penalties PG&E could face – if – that were occur.  In addition to potentially billions in civil penalties, the PUC is considering breaking up the utility.

11 thoughts on “Commentary: Is Criminal Charges Against PG&E the Way to Go?”