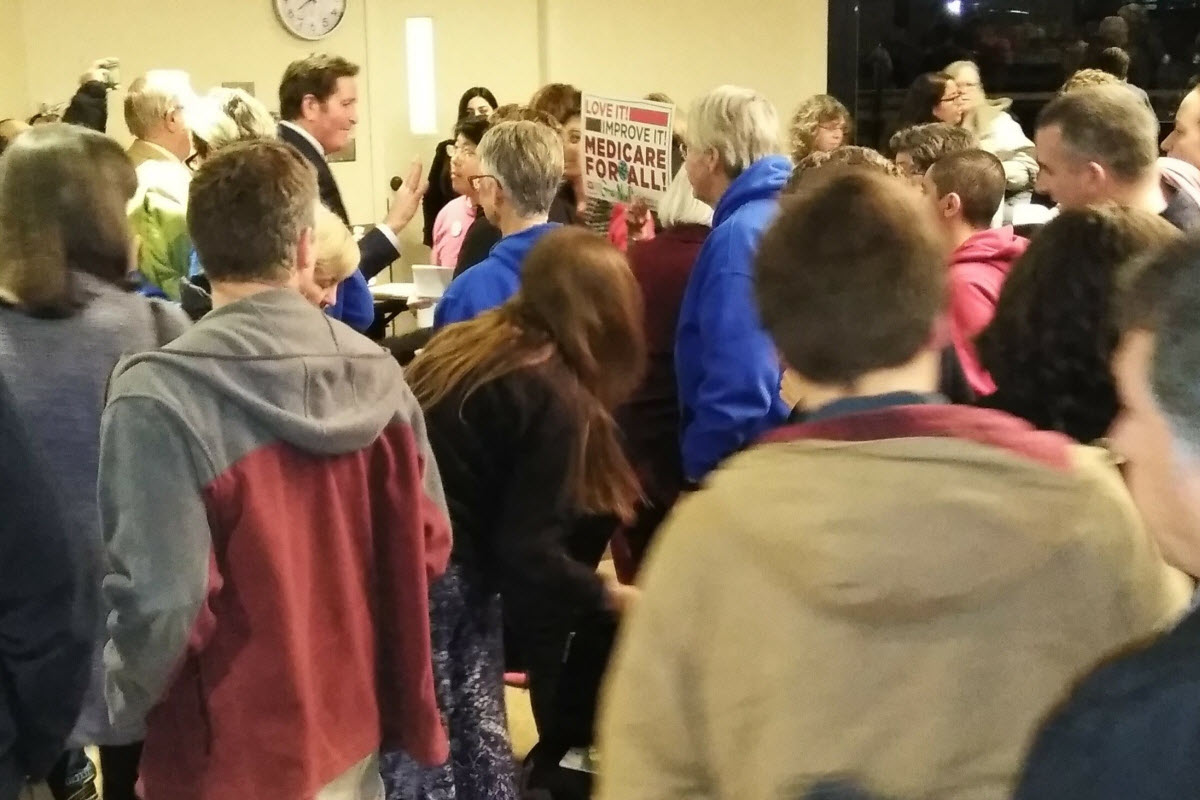 DAVIS – Rep. John Garamendi seemingly wanted to talk about everything – his life and accomplishments in state and federal politics, Trump, the military and yes, even the climate – in a nearly two-hour long jam-packed Town Hall Tuesday night at the Davis Veterans Theatre.

However, virtually all of the 150 people attending wanted to hear him just say one thing: that he will sign on to the “Green New Deal” legislation now circulating in Congress.

But Garamendi couldn’t do it. He talked all around the GND. He teased, and at the end of the evening it almost seemed like the longtime lawmaker would leave  his constituents pleased as punch. Not quite.

Instead, Garamendi had to push through the crowd and beat a hasty retreat from people and the loud, pounding chants of “Green New Deal.”

Local climate organizer Nick Buxton summed up the experience a short time later like this:

“I didn’t have high hopes of Congressman John Garamendi tonight but even I was surprised at his evasiveness and failure to answer our repeated question on why he would not endorse the Green New Deal. His answer about his efforts to ‘green’ military bases shows how much our political system needs to change. No, solar panels on military bases will do nothing to tackle the biggest crisis we face.

“He should be asking why the US has 1000 military bases around the world, why they are mainly deployed in oil-rich regions, and why the US spends more on its military than the next seven largest militarized nations. $716 billion dollars to be spend on the military in 2019, all of which invested in a Green New Deal could transform this country for the better,” Buxton said.

And Buxton was polite. Others were not so kind.

Garamendi recited stories about how he helped get the first solar panel programs going in California, how he worked with former VP and presidential candidate Al Gore on climate problems decades ago, and how he is using that knowledge to, in a practical sense, make change.

“This document (the Green New Deal) is aspirational. I agree with nearly all of it. I will drive this into policy,” Garamendi said. “I know many of you want me to sign it…if I thought it would (make a difference) I would do it,” he added, but to the dismay of the impatient crowd, he did not make that commitment.

“You are going to make us run a progressive against you. You’re going to hold off until climate change is even more out of hand,” yelled many in attendance toward the end. Garamendi, who had kept the group at bay most of the evening, seemed to lose his temper just a bit, raising his voice to say: “I have been to the famine camps…caused by climate change.

“Washington is in chaos, it’s absolute insanity. It’s the most corrupt administration in our history,” Garamendi said to open the town hall, jokingly adding, “I can blame you (for electing him).”

He talked about how the U.S. military was the largest user of petroleum in the world, with a $200 billion budget, and he is more than surprised that, after working for the Peace Corps in his youth, he’d

Garamendi said that the Clinton Administration more than 20 years ago knew the warming of the earth would cause sea rise, stronger storms and bigger hurricanes. “But we underestimated it,” he said. “I knew in 1995 (this) would happen. And it did.

“I’ve dedicated most of my life to this challenge. Now, I want the U.S. to do what it can and must do. I can’t do everything but I can absolutely do this,” said Garamendi, asserting that his new role in the House gives him the power to “green” the fossil-fuel Goliath of the U.S. military.

Garamendi admitted that – to the applause of the room – the U.S. is in wars in the Middle East, Africa and the other places “as a result of the climate crisis.” He talked about “climate refugees.”

Some attendees asked for – and received – his promise to sign on to legislation that would charge a fee on carbon emissions that is expected to reduce emissions by up to 90 percent by 2050.

But others in room screamed “that is too little, too late….it’s two decades too late.”

Garamendi scored more points when he said PGE was responsible for the Camp Fire, noting, “That’s my view. Why didn’t PGE turn off the power?” Chants of “Get corporations out of the power business” followed that.

“The Dept. of Defense is a  huge problem. It’s a primary polluter. We strongly insist that you support the Green New Deal,” said another questioner before Garamendi explained again how he was trying to “green” the military, its buildings, bases and materials.

The crowd tried to shout Garamendi down, imploring him to realize that “tanks don’t run on fairy dust,” and that the answer to the military’s polluting is to downsize the military and “stop the wars.”

But Garamendi seemed fixated on Trump – as much of the nation is – and the damage the current President is causing to the environment, drifting back to Trump and how three presidents – Bush Jr., Obama and Trump – all took the power of war from the Congress unconstitutionally.

“Only Congress can declare war. If President Trump is successful (calling an emergency to get the funds for his border wall), we’ll have an imperial presidency,” said Garamendi.

Share:
Tags:Climate ChangeCres VellucciEnvironmentGreen New Deal
Previous : Sacramento Police Mislead with Claim of No Arrests at Stephon Clark Protests
Next : A Young Girl Is in Harm’s Way, but CPS Doesn’t Seem to Care