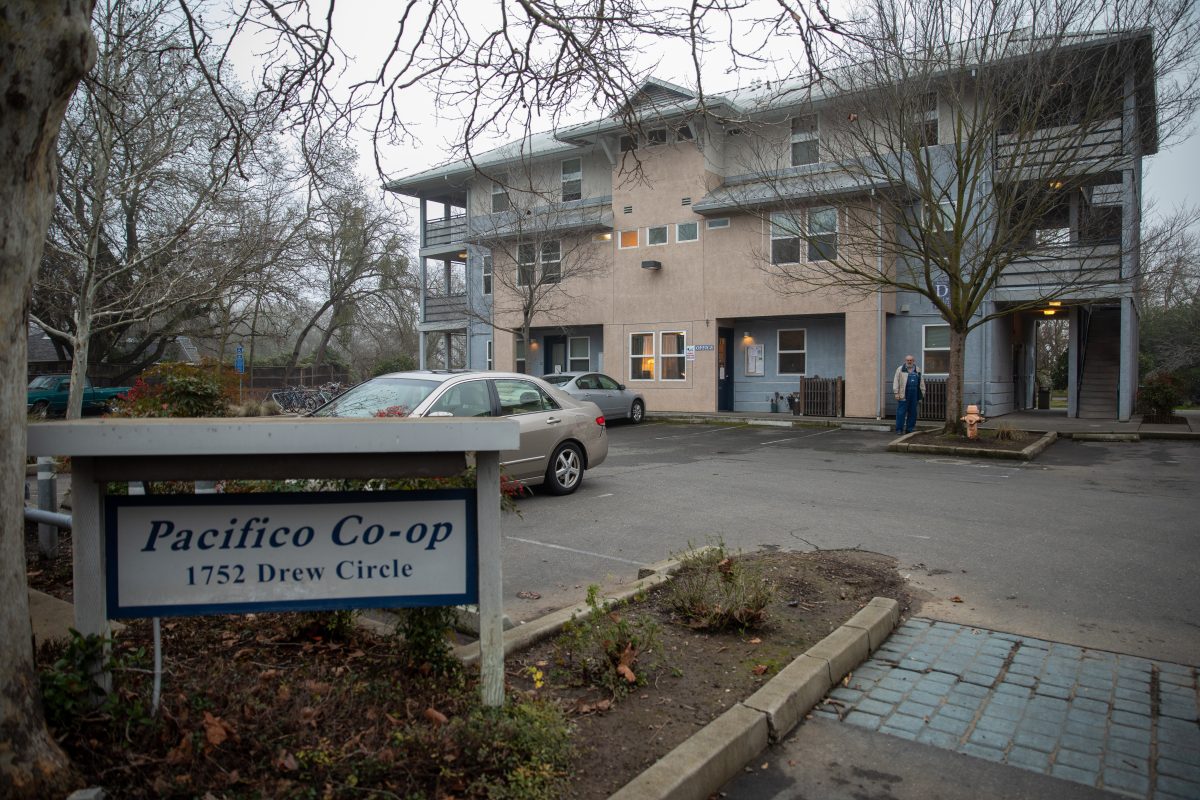 Back on January 10, an information session was held at Montgomery Elementary Library about a Conditional Use Permit (CUP) to expand the existing use of Pacifico to include a residential treatment facility and a navigation center at the property.

Conflating the issues with the new proposal are ongoing complaints from residents in the neighborhoods around Pacifico about nuisances in or surrounding the property.  The meeting on January 10 was co-opted by those concerns and residents have come to council starting last fall to register complaints as well.

On Tuesday, the council will hear not of the CUP but about the ongoing concerns with the current uses. Pacifico was designed originally as a “112-bed cooperative housing development for students, and was the required affordable portion of the surrounding subdivision.”

However, the “property experienced ongoing operational issues and increasing vacancies until it ultimately defaulted on its mortgage. The City, in order to retain the property’s affordability, foreclosed on its note and acquired the property by buying out the first mortgage with First Northern Bank in 2010.”

Since then, the city entered into a property management agreement with the California Center for Cooperative Development (CCCD) and a sub-agreement with Yolo County Housing (YCH) for property maintenance.

The city reports that, since the foreclosure, vacancies have declined, with 83 percent occupancy of 48 units in 2012 and full occupancy by 2015.

They add that “property rents are affordable without subsidy to households of up to 60% of median income. In addition, the property pays all utilities, not by the tenant.

“The property is provided a high level of affordability. The average annual income is $8,480,” they write.  “Pacifico’s average tenant income averages just 15% of median income.”

The staff report looks at recent calls for service to the police department.

Staff writes, “YCH has received only two complaints from neighbors between 2015 and 2018. Both complaints originated with management of Sharps & Flats. These complaints include 1 unauthorized pool use by a Pacifico tenant (tenant was counseled and behavior ended) and complaints about vandalism and broken windows allegedly caused by possible Pacifico residents.”

Pacifico by this measure compares favorably with Cesar Chavez and Eleanor Roosevelt.

The staff report summarized some of the major incidents – two of which drew a lot of attention.  In 2016, a resident had drawn a heavy police response due to drug use and erratic behavior.  He ended up collapsing and dying while in police custody – though an investigation determined that the death was not the result of police action.

In 2017, there was what was originally reported as a homicide as a female in her 30s was found deceased inside her room.  The police originally considered the death “suspicious in nature, warranting a homicide investigation.”  However, murder charges were not pursued and the death was ultimately deemed due to consensual drug use.

According to the staff report, “YCH contacted the alleged boyfriend, who agreed voluntarily and immediately to terminate his tenancy and move from Pacifico.”

Other major incidents are chalked up to being related to non-resident instances.

For example, in 2017, “Non-resident vandalism to the property’s dumpster resulted in a fire that caused major damage. YCH rebuilt the dumpster.”

In 2017 again, “Non-resident vandals started throwing rocks and bottles from the bike path at the buildings, windows and landings on a nightly basis. Sharps and Flats informed Pacifico that they were experiencing the same issues. In addition, there were three (3) reported auto thefts at the property. In early 2018, YCH installed a camera system on exterior walls and landings for the two occupied buildings. Vandalism stopped both for YCH and Sharps and Flats. Auto theft ceased.”

One of the points raised at the community meeting that needs to be explained is to what extent existing problems are due to Pacifico itself rather than its proximity to the bike path and remote location.

At the meeting, staff suggested that current residents are actually victims as well, as the problem may be more outsiders coming from the bike path that are causing problems.

Matthew Lang, a resident of the neighborhood, told the group, “I live next door to Pacifico co-op, and I know they’re there.”

He said, the graffiti “I love meth” was spray painted in front of his home.

Another resident, Tracy DeWitt, explained that she was a longtime resident, but it was not until 2011 when the facility changed ownership and purpose that she began having problems.

“In 2011 when you guys purchased the property was the first time I had experienced a problem,” she said.  “I want to find a new place to live – because I don’t feel safe”.

She added, “My life feels threatened.”

She continued, “That’s being threatened and it’s been going for years.  I have no faith in Yolo County Housing, because you guys have a history for not taking care of your property.”

Ms. Dewitt stated, “Now you want to add a whole mental health component for the county?  You are insane, you can’t even handle what you have.”

“The existing use is really worrying to the people in the neighborhood,” John Slater, another neighbor, said.

But he explained, “It’s not that we’re worried about a mental health facility, it’s that the way it’s run now it should not be added to…”

He explained, “If it were all going to be a residential facility – you would have more support.”  He added, “The concerns are not about the new uses – the concerns are about additional uses.”

Mr. Slater suggested that they withdraw the request for the CUP, address current problems, and then re-file for the CUP.

Staff writes, that a CUP is still in progress.  “In the meantime, YCH management is moving ahead with property improvements and maintenance, including a new exterior paint project and updated privacy fencing. Both of these are currently in the planning stages…”

Share:
Tags:Affordable HousingDavis PoliceNuisancePacifico
Previous : Commentary: Attempted Murder? Another Overreach by the DA?
Next : There Is No ‘National Emergency’ at the Border, and Trump’s Declaration Is Illegal

4 thoughts on “Council to Hear about Current Concerns Regarding Pacifico”