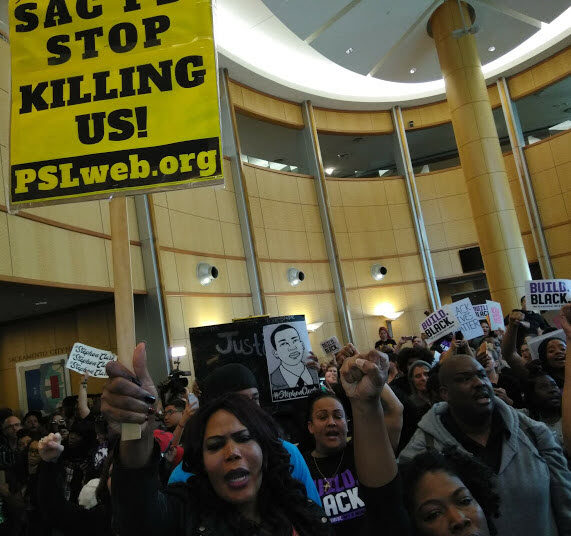 SACRAMENTO – City police officials here – girding for what is expected to be massive street protests if Sacramento County District Attorney Anne Marie Schubert decides not to prosecute officers who shot and killed unarmed Stephon Clark about a year ago – are fudging more than a little as they try to mollify the community ahead of the announcement.

According to information provided exclusively to the Davis Vanguard by attendees of these community meetings, police – including Police Chief Daniel Hahn – assured community leaders, and members of the clergy that there have been “no arrests” in the last year during tense protests that blocked rush hour city streets,  Interstate 5 and even Sacramento Kings games at Golden 1 Arena downtown.

No arrests? That’s simply not true. Not even close.

There have been at least 14 arrests since Clark was gunned down by city police on March 18, 2018, as he tried to enter the home of his grandmother, where  he was living. Clark had only a cell phone.

The shooting of Clark – and that of other people of color throughout the Sacramento region over the past few years – has inflamed the social justice community, and spawned Black Lives Matter Sacramento which has organized most of the protests, including one at Schubert’s office that has been held three times a week for months.

While it is true, legal observers report that Sacramento police have had more of a “hands-off” policy with protests over the past four to six months, avoiding many confrontations with otherwise non-

violent demonstrators in the streets.

Because there have been those 14 arrests, at least. And they are notable. They exist, whether Hahn, Mayor Darrell Steinberg and the SPD admit to them or not.

And there have been injuries, reportedly at the hands of the SPD against non-violent, sign-holding protestors, including Ebony Harper, who was arrested along with Melissa Price, for holding signs at a protest at the DA’s office.

Police rushed the protestors, with bike cops leading the way. They blocked protestors and bystanders in a public area, charging at them with bikes and batons. Harper still faces charges in Superior Court over that confrontation after SPD injured her. Price, uninjured, had her charges dismissed. Both are Black.

In another Black Lives Matter protest, Keyan Bliss, holding a sign critical of the DA at one of the weekly protests criticizing the DA about four months ago, was rushed by officers, and thrown into a sign. He was almost tossed into a red-hot barbecue. He now has a telling scar on his shoulder/neck.

Bliss was repeatedly forced to come back to court for months before he was charged. Also arrested was Tom Jara, but he wasn’t injured, and his charges were dismissed. Jara is White and Bliss is Black.

Also arrested during Stephon Clark protests was Rovante Robinson, a former Vacaville city council candidate. His case was just recently dismissed for lack of evidence. But he was forced to come to court for months of pre-trial hearings. Robinson is Black.

Mackenzie Wilson, a social justice organizer, was arrested for protesting at the Golden 1 Arena protests nearly a year ago. She’s still awaiting discovery, and faces trial.

Additionally, eight people were arrested at a city hall protest three months ago protesting Clark’s killing and that of other victims of law enforcement “crime.” Those charges were finally dismissed for lack of evidence a few days before trial. The County and DA Schubert refused to press charges, but the City pursued them.

Like the false claim by SPD and the city that no one has been arrested at Stephon Clark protests (when at least 14 have been arrested), the millions of dollars that Mayor Steinberg Tuesday promised lower-income neighborhoods sounds – according to some members of the Black community – more like a way to keep the community quiet when the DA makes her long-awaited announcement.