It has been less than a week since the stunning news of the death of Jeff Adachi, and on Wednesday night thousands of people packed the streets in front of the Public Defender’s Office in San Francisco to pay their respects.

Matt Gonzalez, who was the No.2 person in the Public Defender’s Office and could be appointed to replace his long time friend and colleague, explained he met Jeff Adachi in 1991.

“I knew Jeff 28 years, and in that time, I never saw Jeff back out of a fight,” he said.  “I never saw Jeff run away from injustice – Jeff Adachi ran toward injustice.  When he got in those fights, he brought everything he had with him.

“I saw him fight the powerful, I saw him battle the police, the DAs, the judges, anybody standing the way of justice for his clients,” Mr. Gonzalez said.  “It’s true he made a few enemies along the way but you know what else is true – he made a lot of friends. 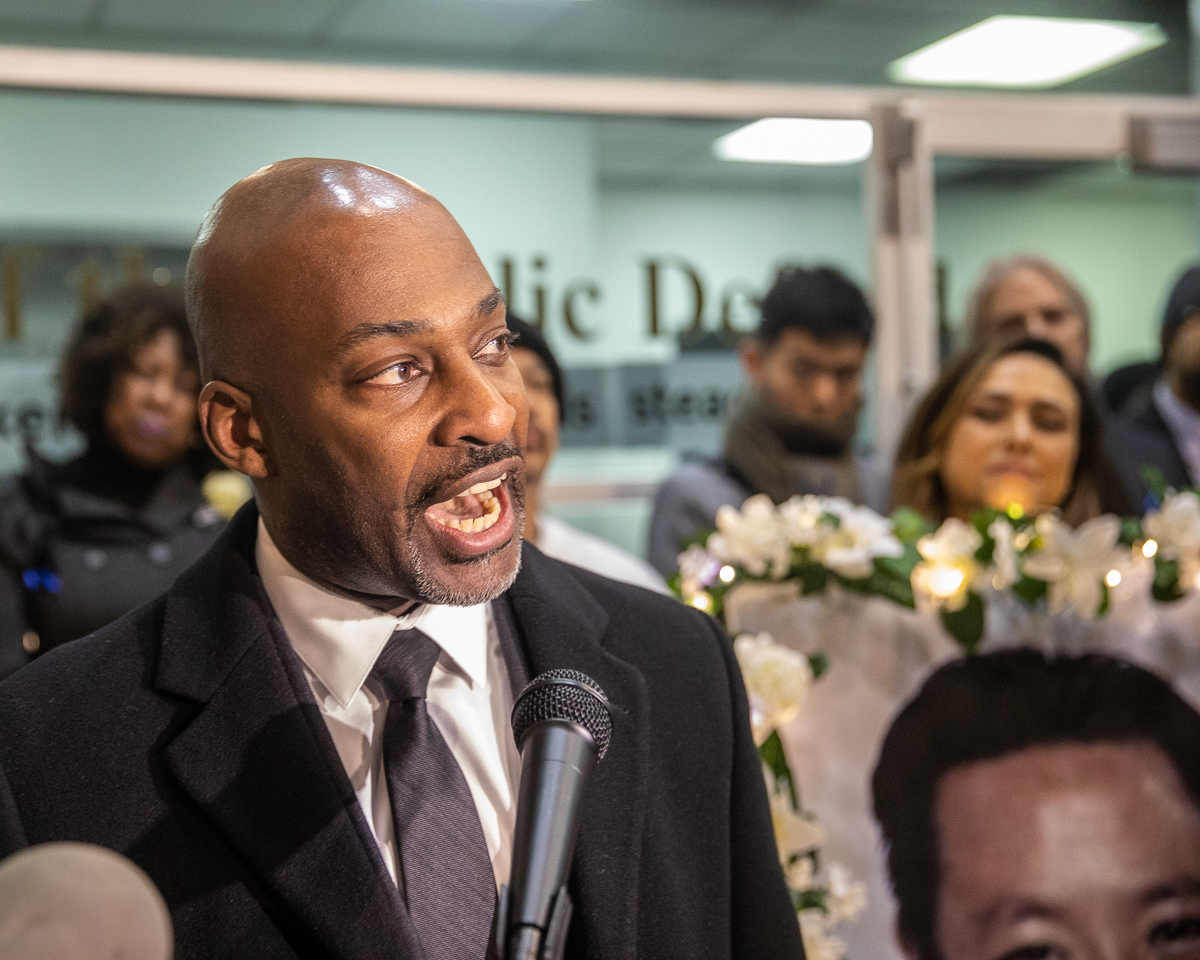 Alameda County Public Defender Brendon Woods said that “he defined what a public defender was.”

“By doing so – he crashed and destroyed and re-shaped all those negative, untrue stereotypes that exist about public defenders,” he said.  “He advocated fiercely, publicly and in doing so, always putting his clients first.

“Jeff would want us to remember that there are systems of oppression based on white supremacy that exist in our courts today that are feeding this beast called mass incarceration,” he said.  “If we want to honor Jeff, to remember Jeff and his legacy, we must advocate.” 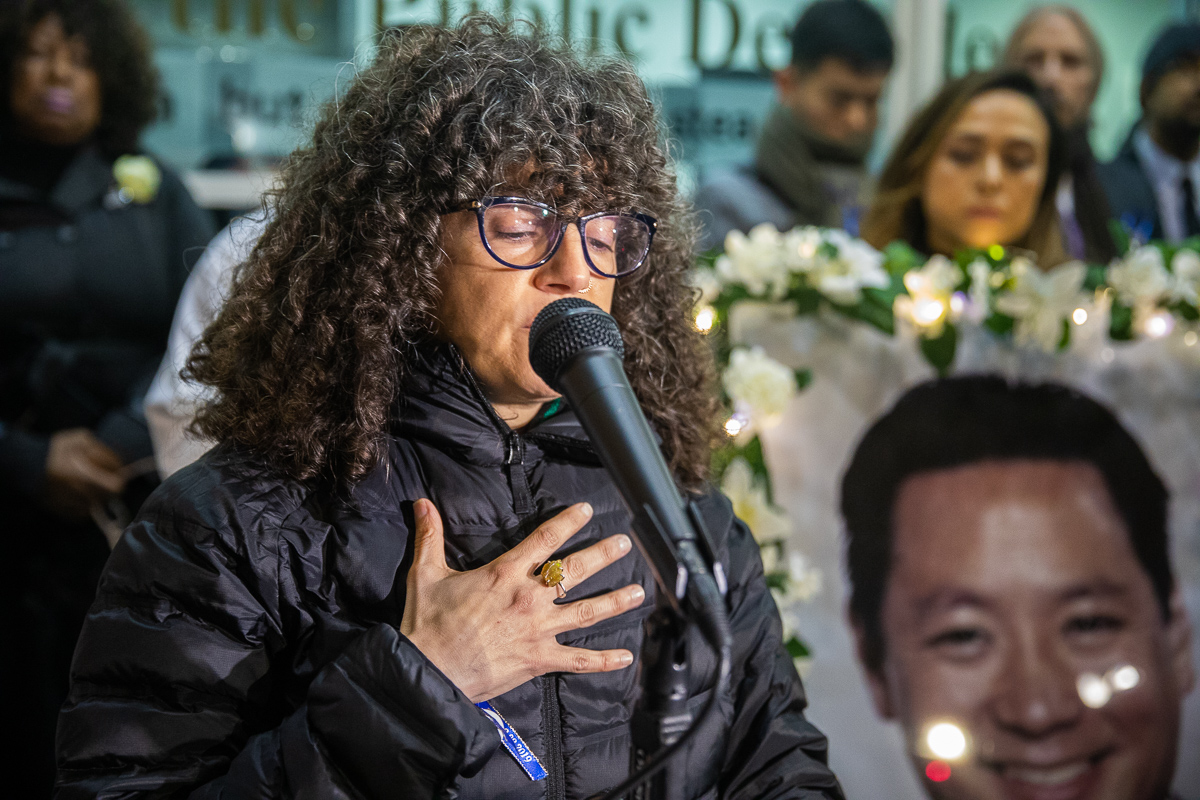 Ivette Robles said, “Jeff’s method was storytelling and he was a master of his craft, be it in the court or through his art, or talking with youth.”

She explained his work on behalf of disadvantaged youth and how he led the way to “no longer accept a prison to pipeline and deportation model for our youth.”  She said, “He understood with clarity how cycles of poverty traumatize and disenfranchise the capacity of people to ascend into their fullest potential.”

Ms. Robles explained, ‘One of the most valuable things that I have witnessed Jeff doing, was to provide me and other people like me – people who didn’t necessarily have a stellar past or background, people of color, LGBTQI people, people with disabilities, a chance and an opportunity to develop our leadership in alignment with justice.” 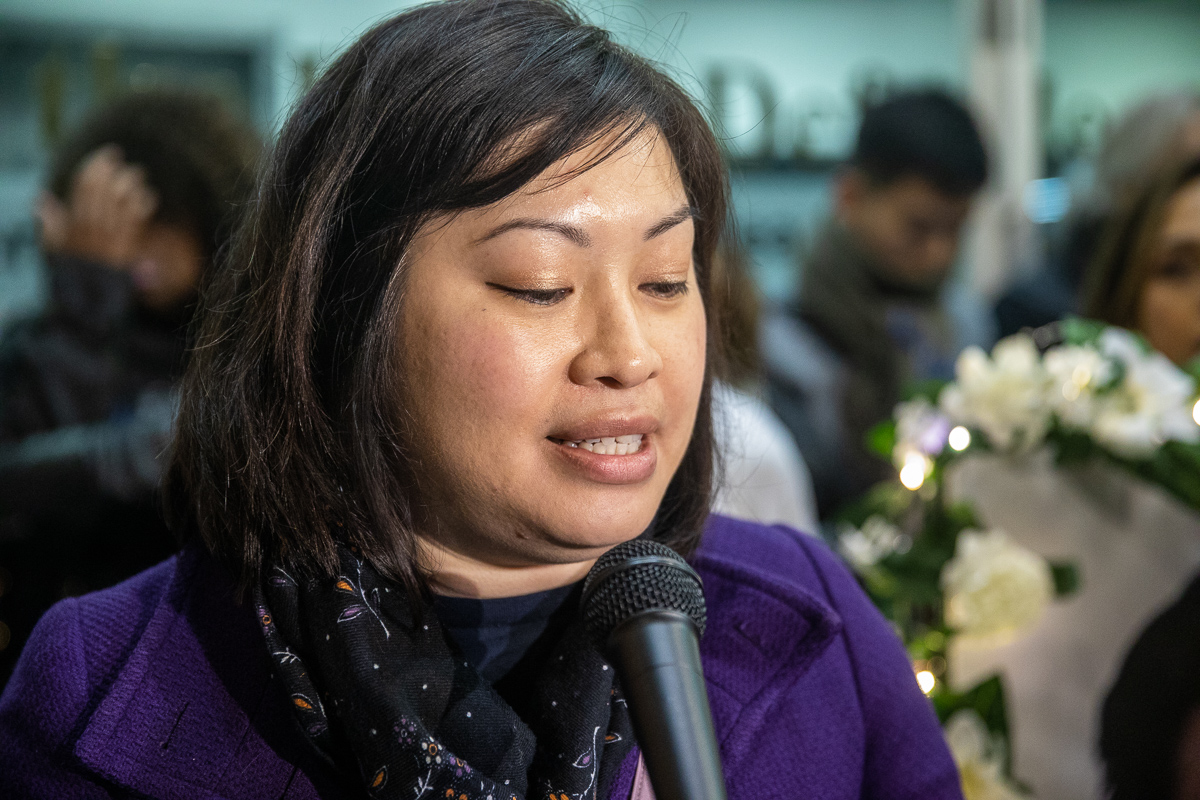 Angela Chan with the Asian Law Caucus called him “fearless and brilliant in defense of underserved marginalized community members.”  She noted he was “nationally recognized as being the best public defender in the country.”

She noted his parents and grandparents were interned during World War II and “he knew first hand the injustices when the government is allowed to lock people up because of the color of their skin and the country they immigrated from.

“Jeff was very different from your average politician,” she said.  “He didn’t wait to take positions only when they were easy to take.  Rather he was one of the first to lead the charge and take the stands even when it was unpopular.  Even when he knew he would be subject to broad insults and attack – especially from the police.”

She described, “Jeff was relentless and courageous in exposing police abuse and misconduct.”  She recalled when he made national headlines holding a press conference with videos of SF Police Officers entering without warrants or consent “and stealing from SRO residents.

“He received tremendous backlash from the police chief and the police union, but that did not phase him,” she said.  He continued pursuing this “until he unraveled the racist SFPD text messaging scandal that made it impossible to deny that racial bias was real in our police department.” 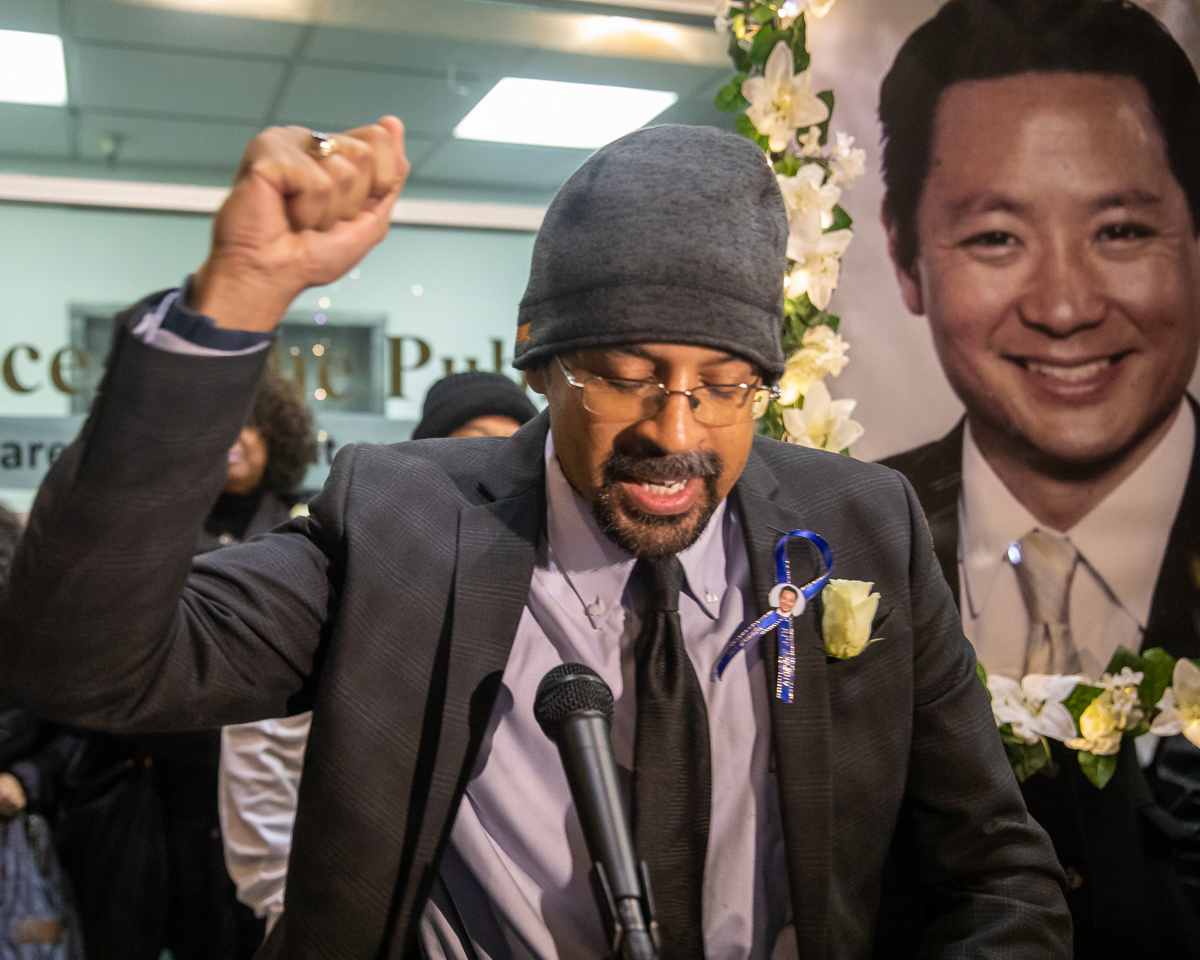 Jacque Wilson said, “Jeff was a movie maker, he understood the power of images.  He touched us with his movies.  He made us know that we could do better.

“Jeff was on a crusade to end the school to prison pipeline,” Mr. Wilson said.  “When we look at (the jail) – less than 6 percent African American (in the city), more than 50% who are locked up are African American.  There’s a problem.  And he dealt with that.”

He had a program called LEAP, “which dealt with keeping youth in the classroom rather than the courtroom.”

He quoted Marcus Garvey: “Look for me in the whirlwind or the storm.  Look for me all around you.”

He said, “I see a whirlwind today.  I see a storm.  And when I look around at all of us, I see Jeff Adachi.” 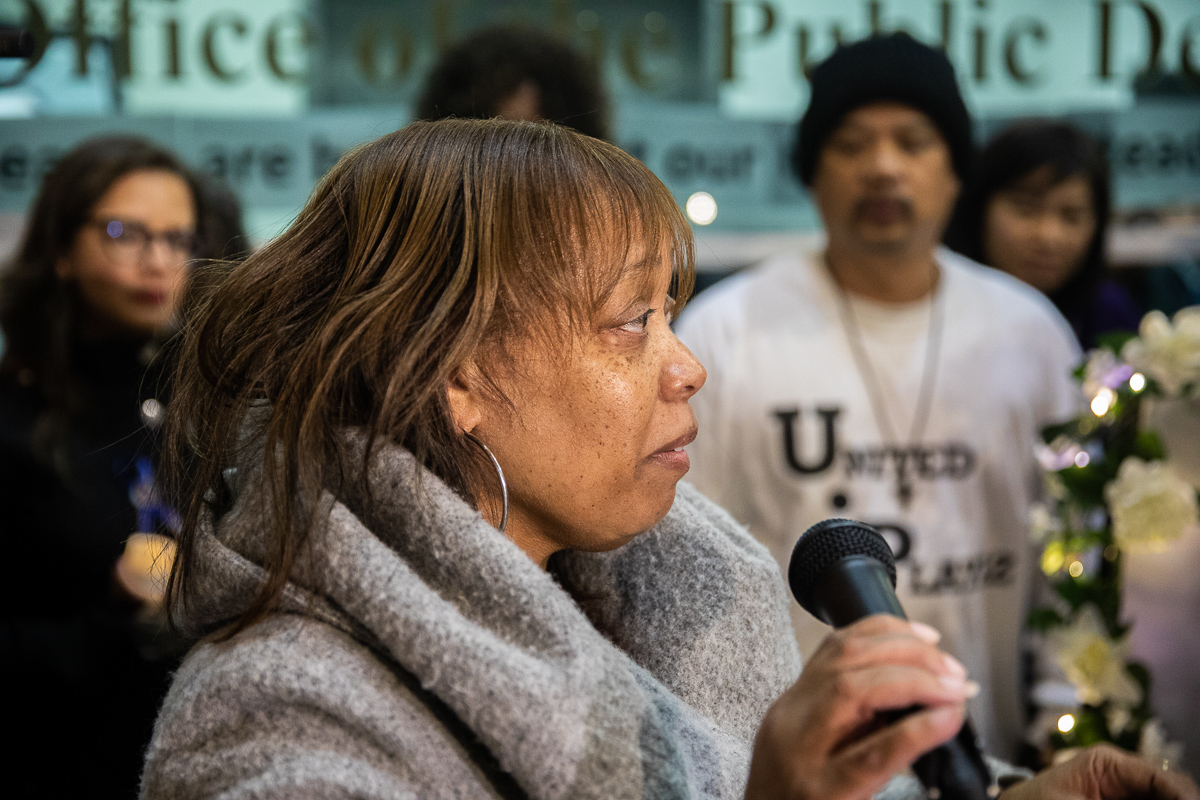 Gwendolyn Woods, the mother of Mario Woods who was gunned down by San Francisco Police in 2015, spoke that Jeff Adachi was the only one who stood by her and fought for justice.

She said, talking to Jeff Adachi’s wife, Mutsuko, that when Jeff Adachi died, her son called her concerned, “because he felt like there was not going to be another one like your husband to speak for the voiceless.  Black brown and poor communities.  Black, brown, men and women.

“In a moment like this, it’s so easy to be discouraged,” she said.  “But we have to continue his legacy.”

She said, “There was no one like this man.  There are black and brown communities who believed (Jeff Adachi), more than they believed a pastor.

“My heart breaks for you,” she said.  “Your husband was one of the three politicians that showed up at the Mario Woods Day. 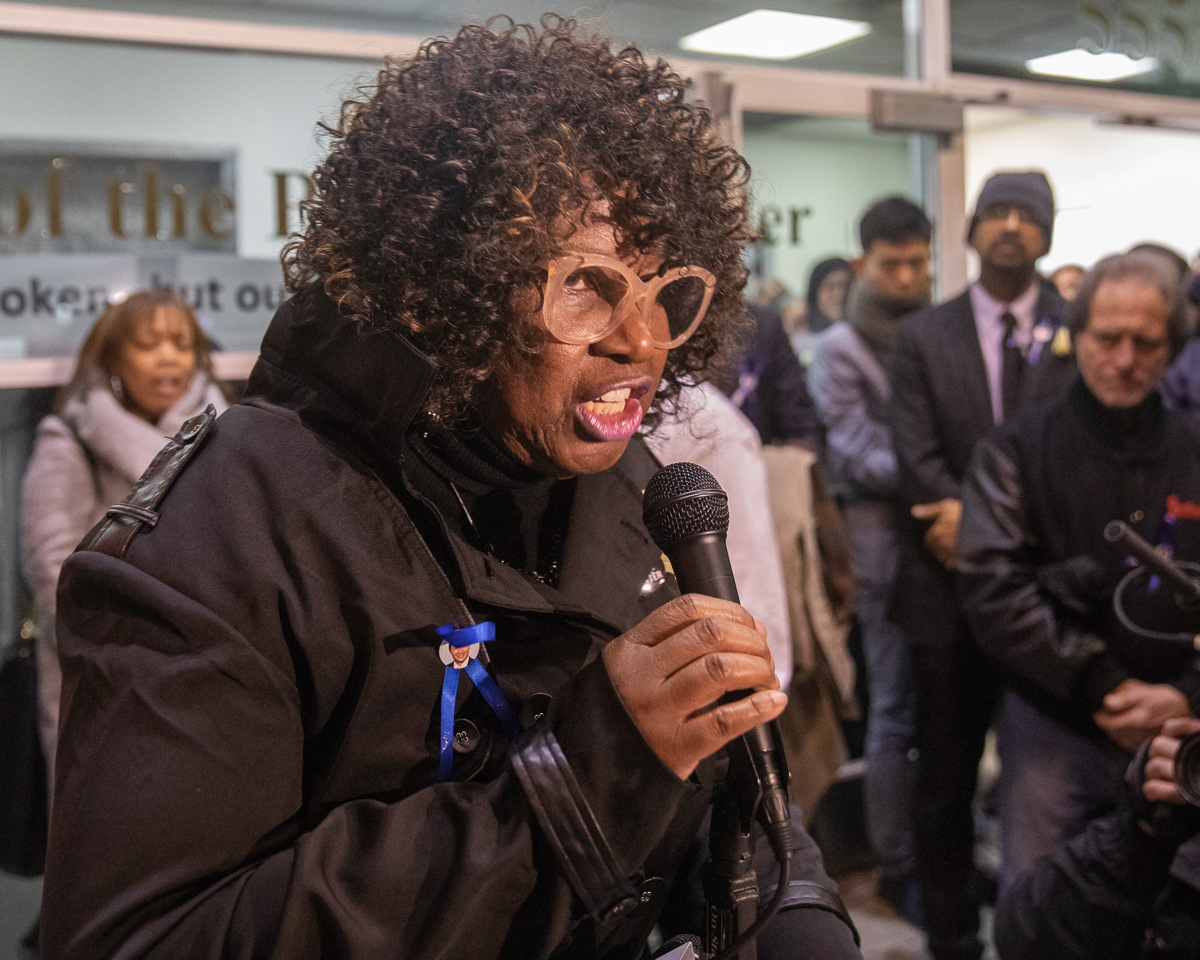 “Involving yourself in something bigger than yourself is transformative,” she continued.  She said he had the ability to cause “an important and lasting change.”  She called him “a transformative leader.

“Jeff is a friend to the black community,” she said.  “Jeff is an advocate and an activist.”

The group marched down Bryant Street past the police department to City Hall.  The official memorial will be next Monday at 11 am. 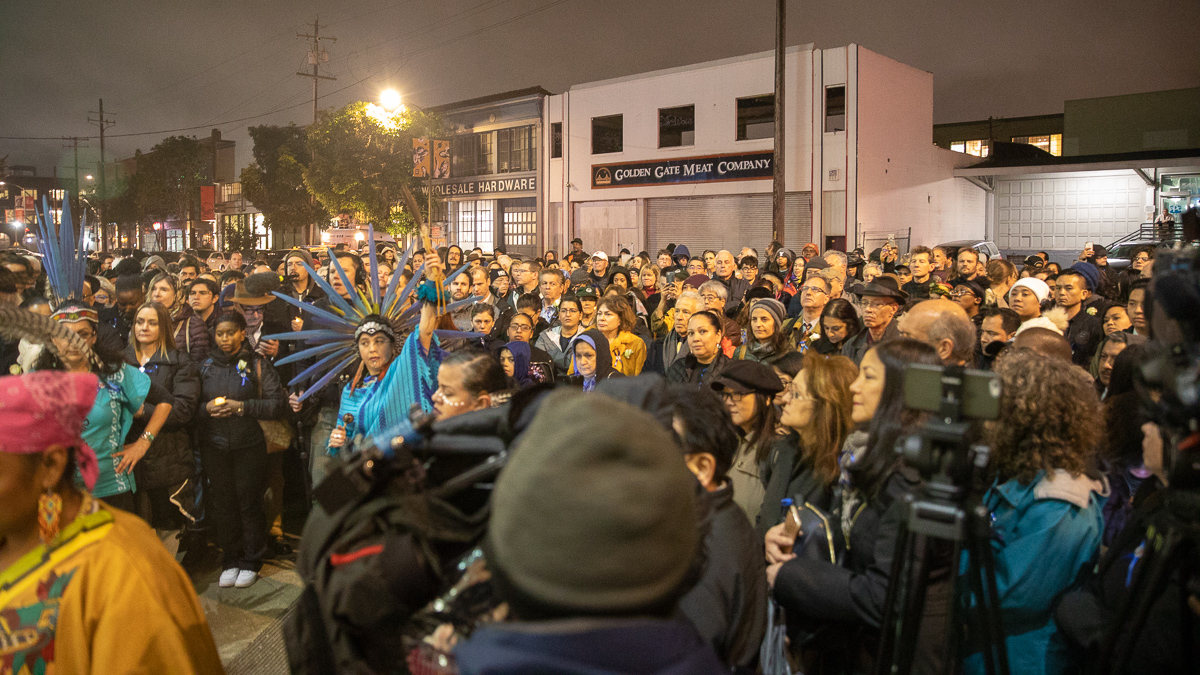 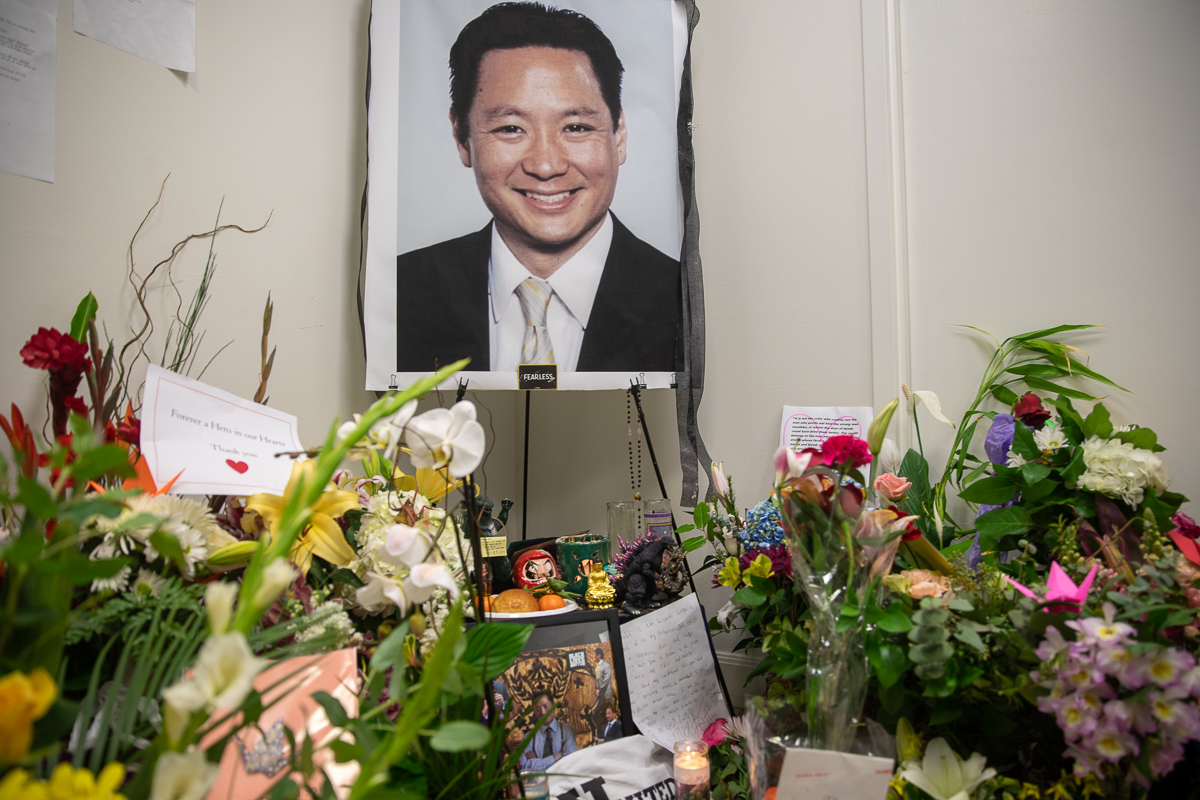