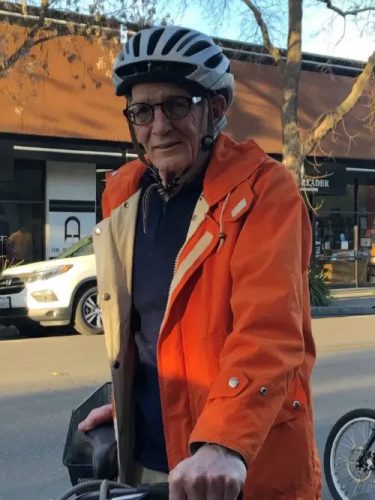 “Bicycling has been important to me,” said Dennis Dingemans. “I was a low self-esteemed kid. My dad told me, ‘Just try it.’ I fell on the grass. But then I got the hang of it. My dad was right!”

Now, after orbiting the sun at the astounding speed of 76k miles-per-hour seventy-three times, Dingemans has completed four Davis Double Centuries, the notorious 200-mile ride through Yolo, Napa , Solano, Lake, and Sonoma counties, on a $100 Bobet bicycle he bought at Payless Drug Store. All four times, he finished after midnight, but he finished! “It’s not a race; it’s a tour,” he said, “and it’s one of the most wonderful things I’ve ever done.”

Dingemans shops for used bikes at yard sales and thrift stores, which he then repairs and donates to The Bike Campaign’s Bike Garage. To date, he has donated 125 bicycles. He is a self-proclaimed “hoarder of bicycles,” although he has whittled down his collection to six.

When in college at the University of Chicago, he rode his bike to campus every day. Sometimes, his girlfriend rode on his handlebars. One Friday afternoon, his best friend and he biked 5 miles downtown to buy $5 tickets to the 5th floor nosebleed seats at the home of the Chicago Symphony where that day Herbert Von Karajan was conducting the Berlin Philharmonic Orchestra performing Beethoven’s 7th.

In 1971, when Dingemans was in grad school at UC Berkeley, his friend, Chris Winters, suggested they ride their bikes to the top of Mt. Diablo on Easter Sunday. They did it, despite a dicky shifter cable that locked up in 10th gear. Two weeks later, they rode to Monterey and spent Saturday night in a plum orchard along the way. They planned to take the train back to Berkeley, but the crew of the Monterey Ltd. told them they weren’t allowed to bring bikes on the train. Somebody overheard the conversation and suggested they take off one of their pedals to fit the train crew’s luggage-width parameters. They did, and it worked. (Southern Pacific was discouraging passengers on their trains because it wasn’t profitable and low ridership would help them drop the passenger service.)

In 1972, his major professor told him there was a position newly open at UC Davis to teach Urban Geography and asked him if he’d like to be recommended for the job. He jumped at the chance. “This was just right for my level of ambition and for the availability of recreational biking plus team sports – soccer, basketball, and softball (no more rugby and no golf),” he said. Every day for fifteen years, Dingemans biked to UC Davis to teach. And, every day, he leaned his bike up against the same eucalyptus tree near his office. Twenty years later, there was still a mark where his bike had rested on the shady side of the tree. And, he was honored with the Academic Senate’s Distinguished Teaching Award. Yes, “this job was just the right opportunity for me.”

Admittedly, he’s done some foolish things on his bike. For example, he rode home balancing a chair he found at a thrift store. He crashed, after which Dingemans decided not to transport easy chairs via bicycle anymore.

Dingemans has been diagnosed with Parkinson’s. He no longer drives. “I can barely walk, but I can still bike,” he said. “I’m certain biking helps me be coordinated.” His wife Robin and he recently rode bikes together to the movies. “Robin and I have never walked downtown. We always ride. One of the reasons I married her was that she was a good bike rider and a bold driver,” he said. They’ve been married 43 years.

Two years ago, Dingemans delivered the presidential address to the Association of Pacific Coast Geographers on the historical geography of Village Homes. He said that the creators of Village Homes “created an environment where they’d like to raise their kids. Bike riders of all ages abound on the Village paths.”

He said, “I’m not a very good athlete, but I love to play.” Dingemans/ advice? “Keep playing. Do it carefully. Know when to stop trying impossible things.”

This series of articles was produced by The Bike Campaign. For more information about how to “Drive Less. Enjoy More” Contact Maria Tebbutt at funmaria@sbcglobal.net or www.thebikecampaign.com