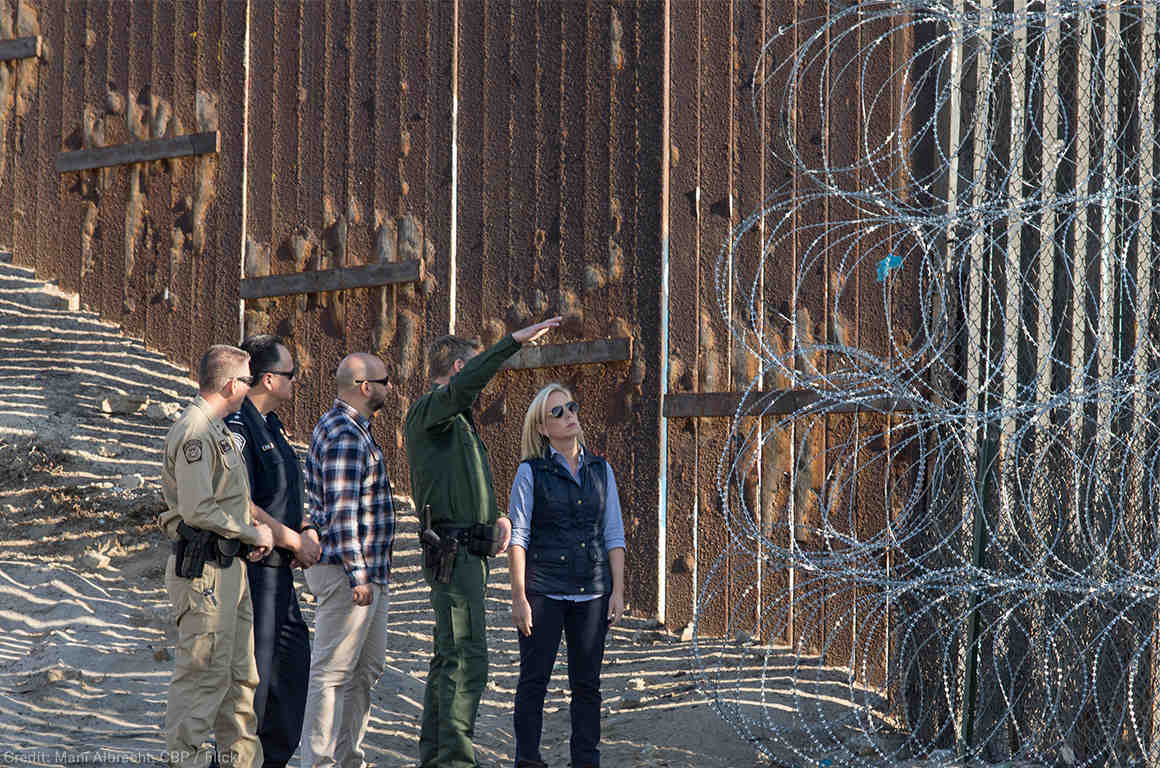 Department of Homeland Security Secretary Kirstjen Nielsen testified on Wednesday before the House Committee on Homeland Security, just days after the House passed a resolution to overturn President Trump’s emergency declaration on the border wall.

Nielsen has helped Trump push lies and fabrications about the supposed security crisis at the border, when in fact the only crisis was a humanitarian one created by the administration when it decided to pursue a policy of family separation.

Nielsen played a critical role in the manufactured family separation crisis, where the government separated thousands of children from their parents. The brutal policy shocked many Americans who watched in disbelief as the government callously and recklessly separated families, and officials under Nielsen’s purview continue to do so, as Customs and Border Protection agents still separate hundreds of children from their families at the border.

This morning, Nielsen refused to directly answer questions from Rep. Lauren Underwood (D-Ill.) about whether she was aware of the devastating health impacts on children of the Trump administration’s family separation policy before she implemented it.

In February, Commander Jonathan White of the United States Public Health Service Commissioned Corps told Congress that he had, in fact, warned Trump administration officials that implementing the family separation policy would result in “significant and lifelong” harm to children. That’s not all: An inspector general report in September found that not only did DHS fail to property track separated parents and children, but officials also falsely claimed that it had a “central database” that would provide information to parents.

To make matters worse, Homeland Security weaponized information from the

Bizarrely, Nielsen continued to insist at the hearing that “there is no policy of family separation,” contradicting her department’s own documents, former DHS Secretary and White House Chief of Staff John Kelly, Attorney General Jeff Sessions, President Trump, and plain reality. But under questioning from Rep. Kathleen Rice (D-N.Y.) she did concede that she knew that the so-called “zero tolerance” policy would lead to the separation of children from their parents.

In January, Sen. Jeff Merkley (D-Ore.) requested that the FBI launch a perjury investigation into Nielsen after she falsely testified to Congress that the administration “never had a policy for family separation.” This was just one of the several lies that Nielsen has told the public about the shameful policy. Just today, Nielsen made the false claim that no parent has been deported “without multiple opportunities to take their children with them,” which contradicts the accounts of many parents, including hundreds of parents who reported that they weren’t offered a choice about being reunited with their children.

Nielsen has also ramped up detentions by DHS, whose facilities are notorious for their substandard medical care, abusive practices, and violations of people’s constitutional rights. Detentions under her watch have escalated to such a point that the department had to funnel dollars from other agencies, including funds meant for disaster relief, in order to cover the costs of jailing immigrants.

Nielsen testified today that “so far this year,” two children have died in Customs and Border Protection custody and one woman’s pregnancy ended in a stillbirth at an ICE detention facility. Earlier this week, Immigration and Customs Enforcement was shamed into releasing 12 babies from a detention center where they encountered “dirty water, limited baby food and a lack of medical care.” Nielsen denied that detention facilities used cages to hold children, earning her a rebuke from Committee Chairman Bennie Thompson (D-Miss.): “I saw the cyclone fences that were made as cages, and you did too, all you have to do is admit it. If it’s a bad policy, then change it, but don’t mislead the committee.”

Nielsen also tried to close the door on asylum seekers with a multitude of inhumane and unlawful practices. She has turned them away from official ports of entry and has gone to great lengths to physically block people from reaching the ports, even using tear gas in at least one incident.

In a joint statement with then-Attorney General Jeff Sessions, Nielsen tried to alter U.S. asylum policy by barring people who had entered the country in between official points of entry from applying for asylum. Nielsen, however, has continued to pursue a policy of forcing migrants to return to Mexico — in violation of U.S. and international law — while awaiting an immigration court hearing to apply for asylum protection.

While some of her policies have been blocked by the courts and requests to block others are pending, it should not fall on the courts to repeatedly correct the behavior of a lawless administration. Nielsen has failed to uphold the law and the Constitution. Instead, time and time again, she has been at the forefront of the Trump administration’s most brutal policies.

With new leadership in the House, it is more pressing than ever for lawmakers to exercise their constitutional duty to fully investigate Nielsen’s abuses and use their power of the purse to hold DHS accountable.

Brian Tashman is a Police Researcher and Strategist for the ACLU