The history of paid parking in Davis has unfolded outside my store window. From here, the center of downtown and the maelstrom of the debate on paid parking, I can see the cause of parking problems and effect of supposed solutions. I can see close to 40 spaces that have been removed over the years—the E Street plaza cost 25, three more for the walkway through the lot, three given away to Zipcar and Uber, two to the crosswalk, at least two to bulb outs, some to bicycle parking in the street, two to the bus stops. This is just on one block. Throughout downtown nearly 100 spaces have been whittled away over the last 20+ years. I use hand count estimates since the city refuses to release hard numbers that would prove they caused the parking shortage. All these losses entailed removing a practical necessity, parking spaces that were being used many times every day, for aesthetic gains that are used far less often by far fewer people or serve no purpose at all. Now the city wants to tax every space because each is a valuable commodity, but they placed no value on them before wanting to monetize them.

This is the sort of firsthand evidence the council needs to hear and heed. There are solid reasons why 90% of downtown businesses, customers and employees are opposed to the city’s paid parking plan. The 70 businesses that entreated council to stop implementation represent generations of knowledge of how best to serve downtown Davis. The Chamber of Commerce, the vast majority of DDBA

members and downtowndavis.org are all against the plan. Business is against metered parking because it deters people from coming and staying downtown, which is bad for business.

Paid consultants along with proponents on city staff prepared and presented the paid parking plan to council. It pretends to be factual but is a one-sided sales pitch that assumes positives and minimizes or ignores negatives. And if the consultants are wrong, they pay no price. Downtown pays it all. If downtown is going to be affected most, they should have the most say.

But the process so far has relegated downtown to voicing objections during public comment. There has been no debate in chamber because one position is sidelined. So we have taken the issue into the public sphere in hopes that council will listen to the vast majority of the townspeople who are also 80-90% opposed and that council will press staff for full and complete answers and not rubber stamp before getting them. 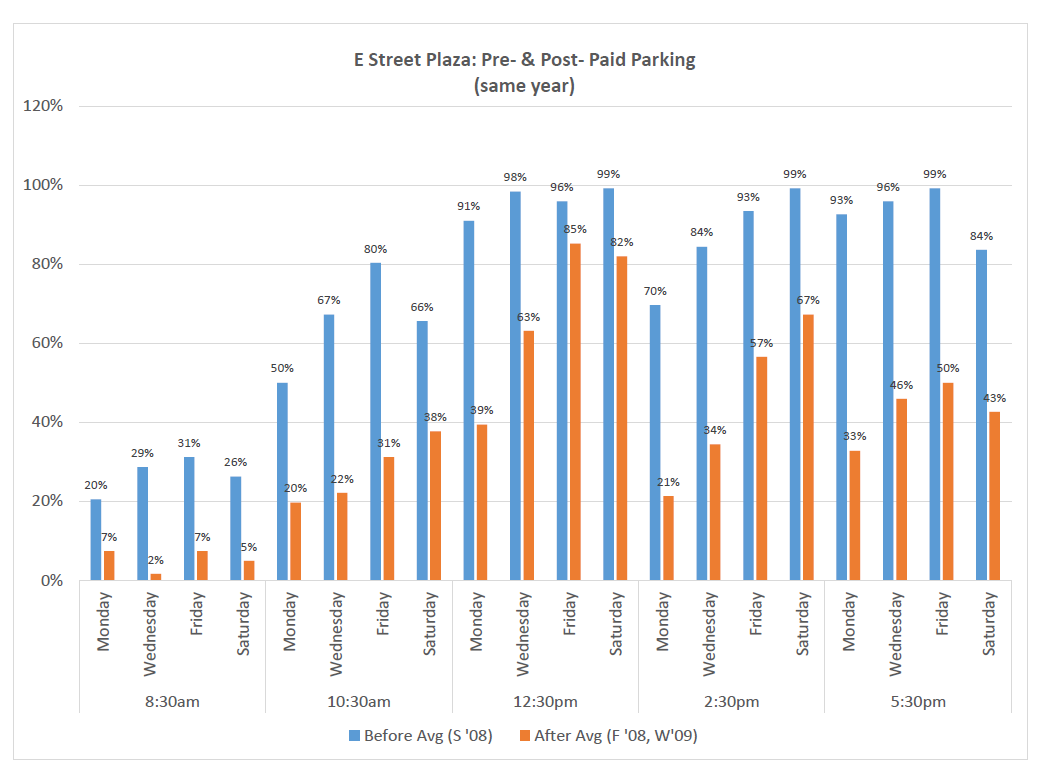 We are certain the plan cannot withstand real scrutiny. Here are just some of its failings:

Since no new space is being added, for the plan to meet its promise of providing space for people willing to pay, other people have to be driven off. But who will be driven off? Employees? Low income drivers? Customers? The plan has no projections for this and consultants were woefully unprepared to answer when Brett Lee asked. They also had no answer to how many cars adjacent untaxed areas would be expected to absorb.

The plan claims its price of 50 cents to $1 an hour is the lowest price that achieves availability targets of 80-85% occupancy. THIS IS MATHEMATICALLY FALSE. The lowest price that achieves 80-85% occupancy at all non-peak times when occupancy is below that level naturally is ZERO. If the only purpose is to achieve 80-85% no intervention is needed the majority of the time. Yet the proposal collects money from 10am to 10pm everyday including Sunday. The city seems intent on getting the most money out of a plan that’s supposedly not about the money.

This is the worst kind of tax—regressive and paying mostly for its own implementation and enforcement. What small gains there may be are supposed to be earmarked for downtown improvements, but the city defines meters as an improvement, so the money would go for more meters and more ticketing. Downtown would gladly refuse this largesse if it could.

Isn’t turnover as important as occupancy? Extending the time limit from 2 to 5 hours goes against turnover. It makes it cheaper to park downtown than in the UCD lots while attending class.

Another unchallenged assumption is that making it harder to drive downtown via paid parking will encourage people to bike and take public transport. It is more likely that drivers will drive to Target or Woodland or get what they used to buy downtown online, all of which adds up to more driving.

The task force recommendations are upside down. The DPTF returned with 18 recommendations to improve parking downtown. The city then chose how to prioritize them—it put paid parking, the most expensive, hated and potentially damaging suggestion at #1 and put increase parking supply and improve public transportation at the bottom of the list with no action at all.

How many more parking tickets are expected? Does the revenue expectation presented include this money stream? Can we avoid Sacramento’s massive smart meter ticketing error rate? What is the psychological deterrent of ticket fear if you can be ticketed from the minute you park 10am to 10pm 7 days a week? What does that mean to the culture and environment downtown? Should the police department focus its energy on more tax collection via ticketing? Have they considered how change and new technology are exclusionary to the elderly? Why are unrelated improvements being tied to paid parking instead of implemented on their own?

The staff report and the consultants plan, despite their length, don’t just fail to answer these questions, they never ask them. Council is being presented with a one-sided argument masquerading as fact. Proponents call the plan “science” because it cites an expert and cities like San Francisco where paid parking was deemed necessary. But how many experts say the opposite? How many cities like Sonoma and Petaluma have healthy downtowns without paid parking? If you already have a purpose you can then pick your experts and examples to suit that purpose. That’s not science, it’s political manipulation.

Science follows observation and experiment, which brings me back to my shop’s view of the E St. lot. This lot is the only real example of how paid parking works or fails in Davis, not some other town or theoretical model, and should be studied fully and accurately. Its lesson has been perverted by the consultants who present a glaring contradiction: the lot is currently at $1 per hour AND near 100% occupancy during peak hours. Yet their claim is that paid parking achieves 80-85% occupancy during peak, which is the only time there is a parking shortage. So paid parking does NOTHING to help occupancy at peak times. Before anyone says the lot’s 100% occupancy while paid also refutes opponents’ claims that paid parking drives customers away, refer to our featured image. It shows first that paid parking met huge resistance when implemented and that it took years for the lot to get back to being full at peak hours. Downtown businesses cannot survive such an exodus made full scale. Secondly, it is only at peak hours today that occupancy is high with or without paid parking. The paid lot is still underused compared to pre-meter at non-peak times. So the lot proves that paid parking does not work at controlling parking when it is needed AND it proves that paid parking drives people away at other times and upon implementation.

Here is a situation where logic, prudence, democracy, business, economics, math and science are on one side. City staff and consultants are on the other. Which side will council be on?

Dan Urazandi is a downtown owner – this is a personalized version of a letter submitted to council by downtowndavis.org. The original can be found at http://downtowndavis.org/latest-news/.