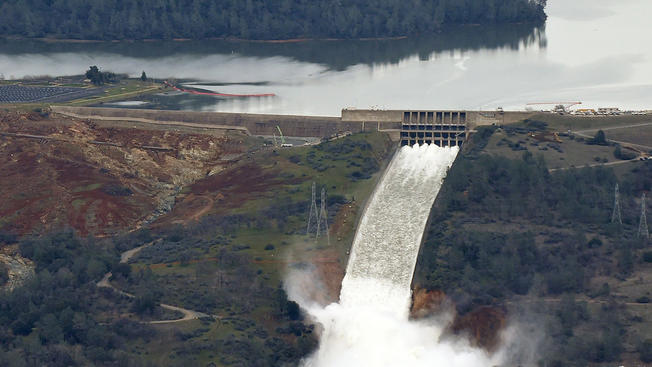 SACRAMENTO – The CA Dept. of Water Resources – facing allegations that a toxic atmosphere of racism, sexism and DWR corruption led to the Oroville Dam near collapse two years ago – lost a key motion to have that information kicked from a massive lawsuit by farmers, the city of Oroville and other residents.

Sacramento County Superior Court Judge James McFetridge, filing his decision on a DWR motion to strike those scurrilous allegations, made the ruling public Thursday after about a month of consideration, following a hearing last month.

In a complicated case involving at least three groups, plaintiffs have argued generally that the condition of the property – the Oroville Dam, whose near failure caused the evacuation of about 200,000 people – was a public “nuisance” caused by DWR malfeasance.

The scandalous allegations that caused DWR to file a motion to strike were those filed the City of Oroville, Akers Ranch and JEM Farms.

The allegations declare that in 2010 or 2011 “supervisors at DWR condoned and allowed a noose to be hung at a meeting room used daily by DWR staff. It was directed at an African American employee. The

noose remained there for two to three months in plain view of supervisors until the African-American employee took it down himself.”

In a courtroom packed with seemingly dozens of lawyers and observers Feb. 15, DWR argued that the claims of racism and sexism were not relevant.

But the plaintiffs’ legal team said DWR was “compromised…by a toxic culture that undermined the safety” of the dam, charging “we have witnesses that would testify about the “go along with the old boy network…the purpose of the suit is to get to truth of racism and sexism.”

DWR countered in their filings and in February that the sole reason for the allegations in question was media, suggesting “the purpose is to diminish the public view of DWR and taint the jury pool.”

The declarations filed by the plaintiffs were dramatic.

“As but another example of the atmosphere of workplace harassment, the same African American DWR employee at the dam found a doll hanging in his locker. It is believed that DWR has hired no more than one or two African Americans at the Oroville Dam over the past 20 years.

“In or around 2010, a white DWR employee told an African American employee that ‘This job is not like picking cotton.’ A DWR supervisor, Maury Miller was present and heard the racist comment, but took no action when confronted, stating ‘I heard nothing.'”  – “This African-American employee was also called ‘[the n-word],’ but no action was taken by DWR management to address the racist behavior.”

And, it continued:  “DWR has also allowed sexual harassment against female employees to proceed with impunity,” citing, “For example, one of the few female employees at Oroville Dam was constantly harassed by her male supervisors and counterparts.

“One supervisor repeatedly asked her out of lunch dates. She was exposed to graphic images, including a CPR mannequin posed in a sexual position at one of her worksites. DWR employees described a woman’s conference attended by a female employee as a ‘Dyke conference,’ and regularly referred to female employees as dykes…when employees spoke up on behalf of the victims of harassment, they were at times physically threatened.”

Plaintiffs also allege DWR supervisors stole state equipment and supplies for their personal use, and DWR senior management kept two sets of books….and that after the dam’s failure they were ordered to destroy files relating to “key physical evidence of its inadequate maintenance” that may have led to the dam’s problems.

“The ruling was a complete denial – a clear victory – of the Department of Water Resources motion.  The net effect is that DWR will have to explain the toxic culture of sexism and racism which contributed to the dam safety failures.  The full circumstances of what happened at the Oroville Dam will be exposed,” said Niall P. McCarthy, plaintiff’s attorney from the law firm of Cotchett, Pitre & McCarthy, LLP.

The next hearing in what is expected to be a long court battle is April 5.