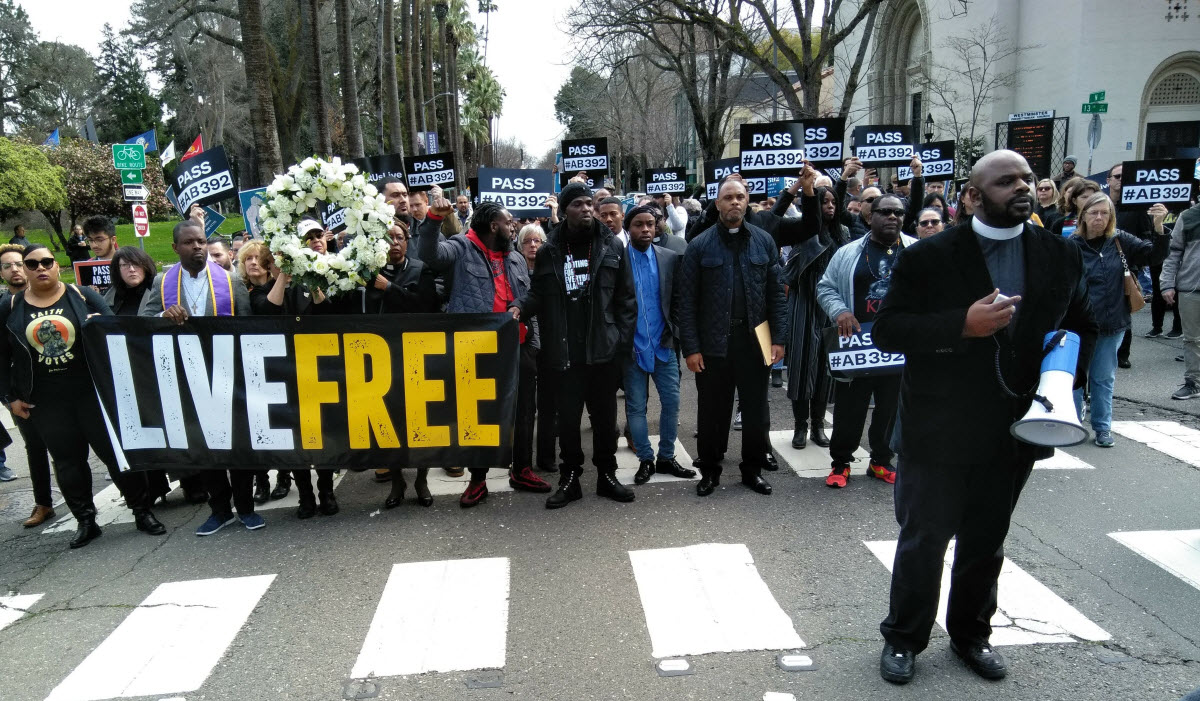 SACRAMENTO – College and high school students staged coordinated walkouts, and joined a nearly 500-strong march from Sacramento City College to the State Capitol Thursday to protest the killing of Stephon Clark a year ago by city of Sacramento police – and the decision by the District Attorney last Saturday to not charge those officers.

Since that announcement, protests have closed Arden Fair, the largest mall in the area, all day Sunday; burned Blue Lives Matter flags at police headquarters, taken over a Sacramento City Council meeting and marched through the most affluent area of the city – leading to arrests of pastors, reporters and legal observers.

Thursday, the four-mile student march followed an early morning march of about 200 people to the Capitol to push for passage of AB 392, which would reform police policies and limit the use of lethal force. 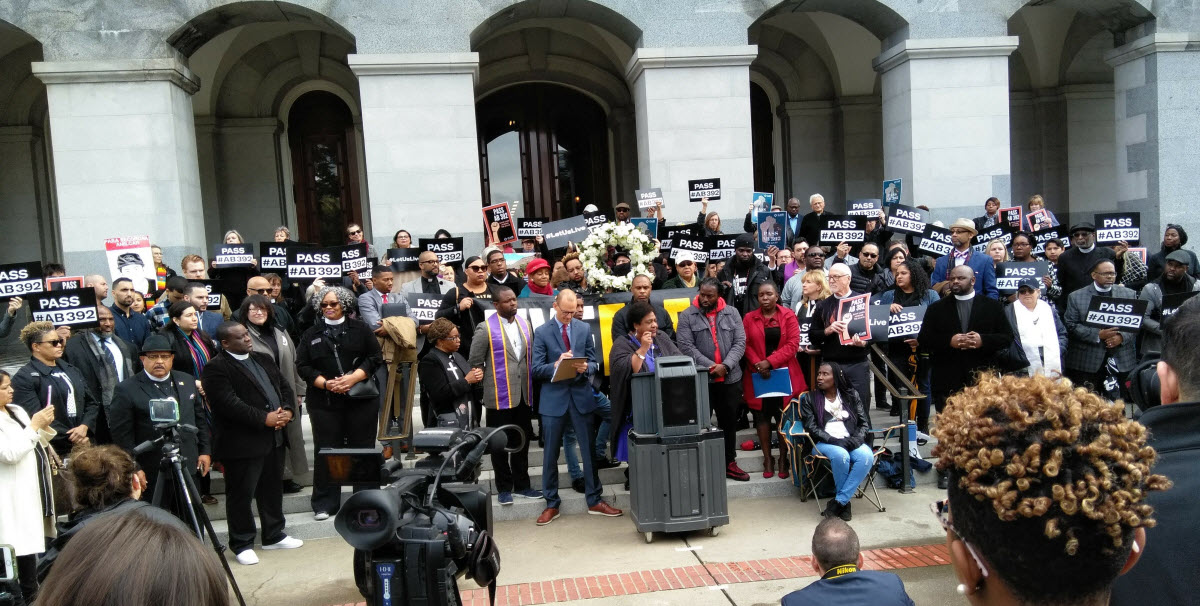 At SCC, hundreds of sign-wielding students went into classrooms, interrupting studies to exhort other students to join the march. It worked. The numbers of students leaving SCC nearly doubled after an hour of hand-to-hand recruitment.

“We are revolutionaries….We can’t stand for nothing, we must stand for something,” said organizers to the crowd at SCC before it moved off down Freeport Blvd. to the State Capitol.

Less than a mile down the road, the protest barged up the steps to C.K. McClatchy High School to again appeal to students to join them. An hour later they did the same at St. Hope/Sacramento High School.

To the chants of “What’s his name? Stephon Clark,” the march took over Broadway. CA Highway Patrol guarded the freeways, fearful of a repeat of an occupation of I-5 last year during protests following Clark’s killing.

Earlier in the day, at Westminster Church near the Capitol, clergy railed against the treatment of people at the Monday’s East Sacramento protest that resulted in 84 arrests of peaceful activists. City police, Sheriff deputies and CHP officers entrapped them after telling them to disperse, but law enforcement blocked the exits and there was nowhere to disperse.

Referencing the treatment of what is now being known as the “Fab 84,” clergy described how it was a peaceful protest that left young teens with “panic attacks,” people in wheelchairs in cuffs and numerous pastors, reporters and National Lawyers Guild legal observers sitting on the edge of the road, zip tied.

The clergy said that many of them have been in discussions for weeks with the city of Sacramento and were guaranteed there would be de-escalation of any protests after the expected DA decision not to prosecute. But there was “no de-escalation” Monday in East Sacramento where the “power elite live,” they said, only “oppression.”

Imam Haazim Rashed of Masjid As Sabur mosque in South Sacramento said that the killing of Black people by police is “not a civil rights issue,” but a “human rights issue,” and that “we have to hold people accountable,” and AB 392 would be the “start” of doing that.

“Enough is enough,” said Rev. Kevin Ross. “Police officers who terrorize will not continue on our watch,” he added.

Assemblymembers Shirley Weber (D-San Diego) and Kevin McCarty (D-Sacramento) co-authored AB 392, which would police the police as to how much force they might use in some situations.

“Things need to change. My ancestors didn’t invest in me (for no reason). I’m not going to insult their legacy of hopes and dream of slaves. We must fight back. AB 392 is the beginning of justice. We have a long way to go,” Weber, the daughter of an Arkansas sharecropper, said.

McCarty, who lives just blocks from the mass arrests that occurred Monday, said it was a “disgrace,” adding “I saw firsthand a peaceful protest…it was an embarrassing moment (the arrests). I apologize on behalf of my city. That (the arrests) was not correct.” 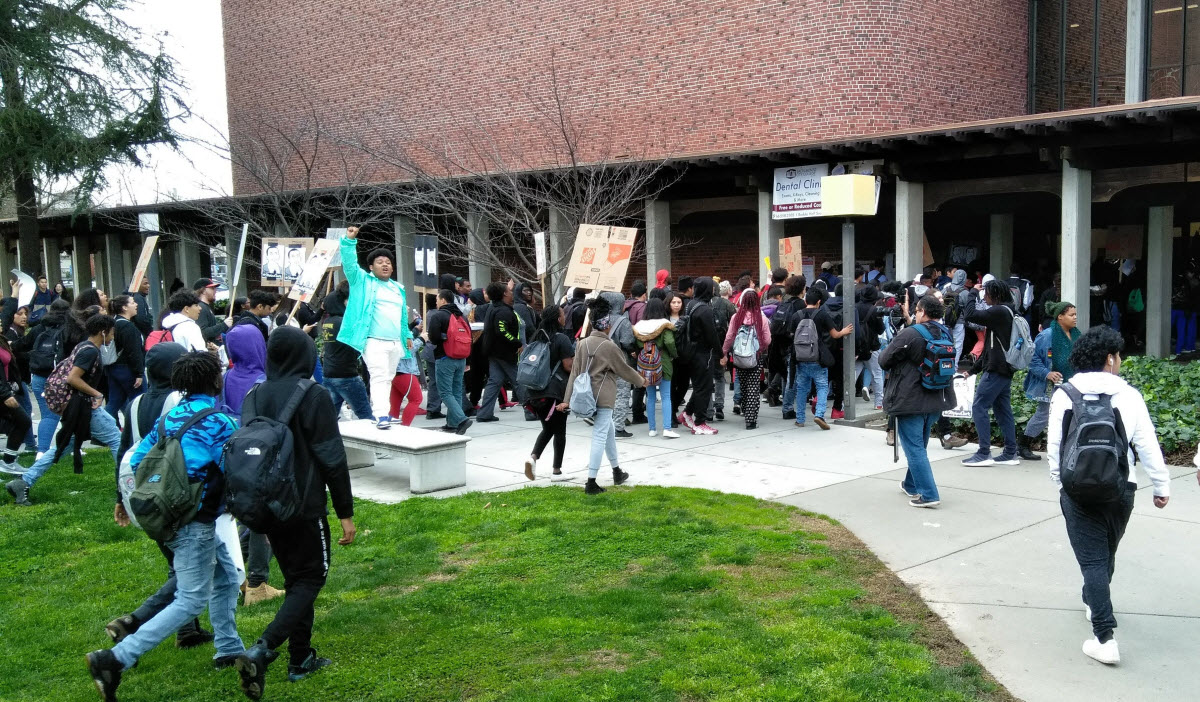 McCarty said AB 392 wasn’t a “crazy measure…it will save lives and protect communities and make cities safer for everyone.” McCarty said it will also save taxpayers money, noting that Los Angeles had to take out a $60 million loan from “Wall Street” to “pay off an excessive force lawsuit.”

The BSU-led student walkouts issued a list of demands Thursday, including the passage of AB 392.

“Local and state policies allow law enforcement to use deadly force without consequence, even if they are not in immediate danger. This lethal policy has led to the deaths of countless Black Californians in Sacramento and around the state. To close this loophole that allows police to take Black life extra-judicially, we make these demands:”