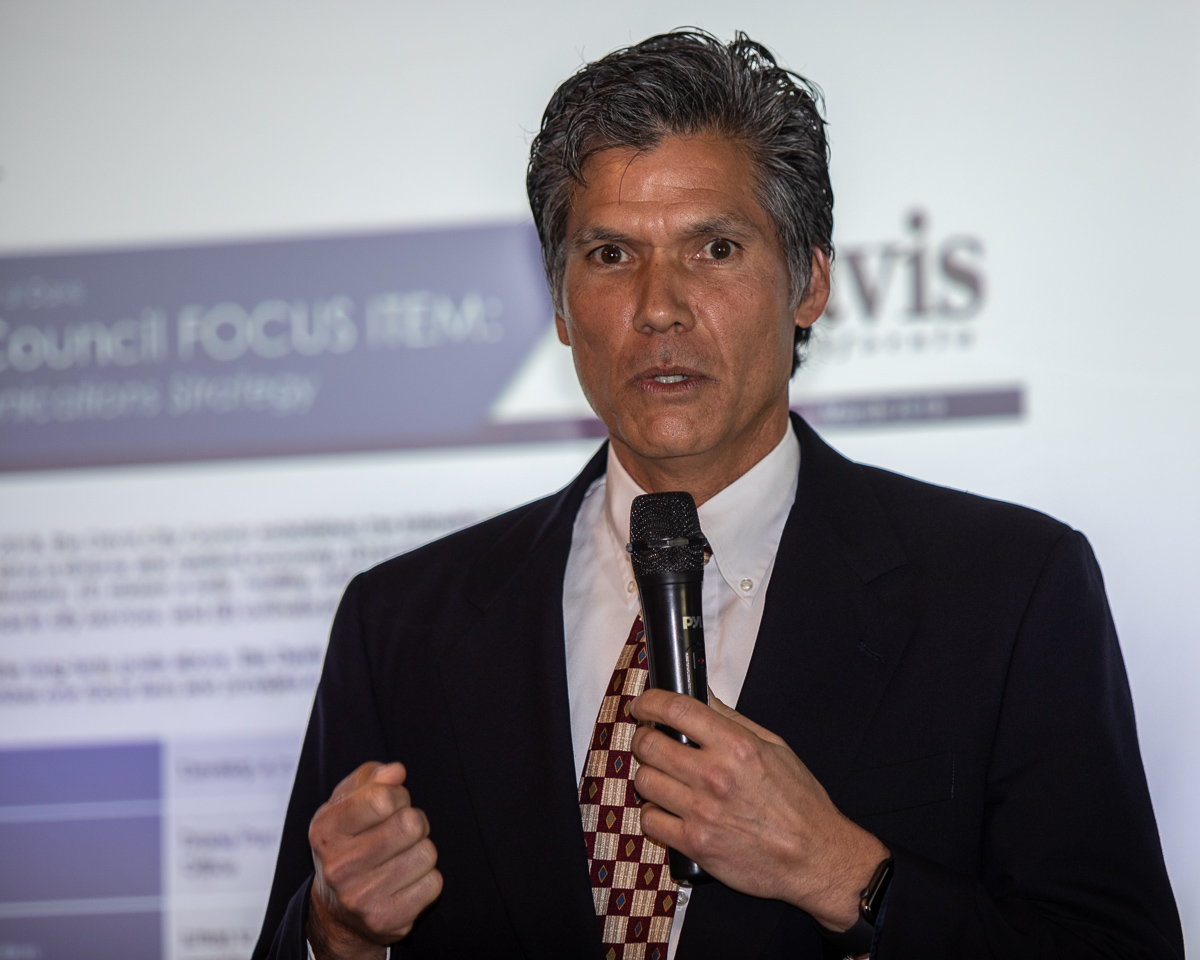 He called the plan “multifaceted” and told the group, “We are really focused on creating a downtown plan that’s forward thinking, that’s looking ahead to 2040 and beyond.”

Right now, he said, for anyone who wants to develop or redevelop their property, “we have what we could (say) – and I’m probably being polite about it – a cumbersome process to navigate.”

Currently there are six different policy documents that govern how people can deal with their property.  “One of the desired parts of the downtown effort is to consolidate those regulations (and) documents into one easy to use, easy to understand and navigate

He said that “the approach we’re taking is a form-based code.”

Mike Webb also explained that housing opportunities are a big focus of the downtown plan.

Mr. Webb said, “There’s a real interest in introducing more and different types of housing variety into our downtown to really invigorate the downtown and make it more of a 24 hour / 7 (day) presence.

“By having folks living above businesses,” he explained, “it livens the atmosphere and provides a built in customer base as well.”

The goal is for a public review period starting this spring, which would last for 75 days.  There would be a public workshop and presentation, a DPAC (Downtown Plan Advisory Committee) meeting and some commission workshops. 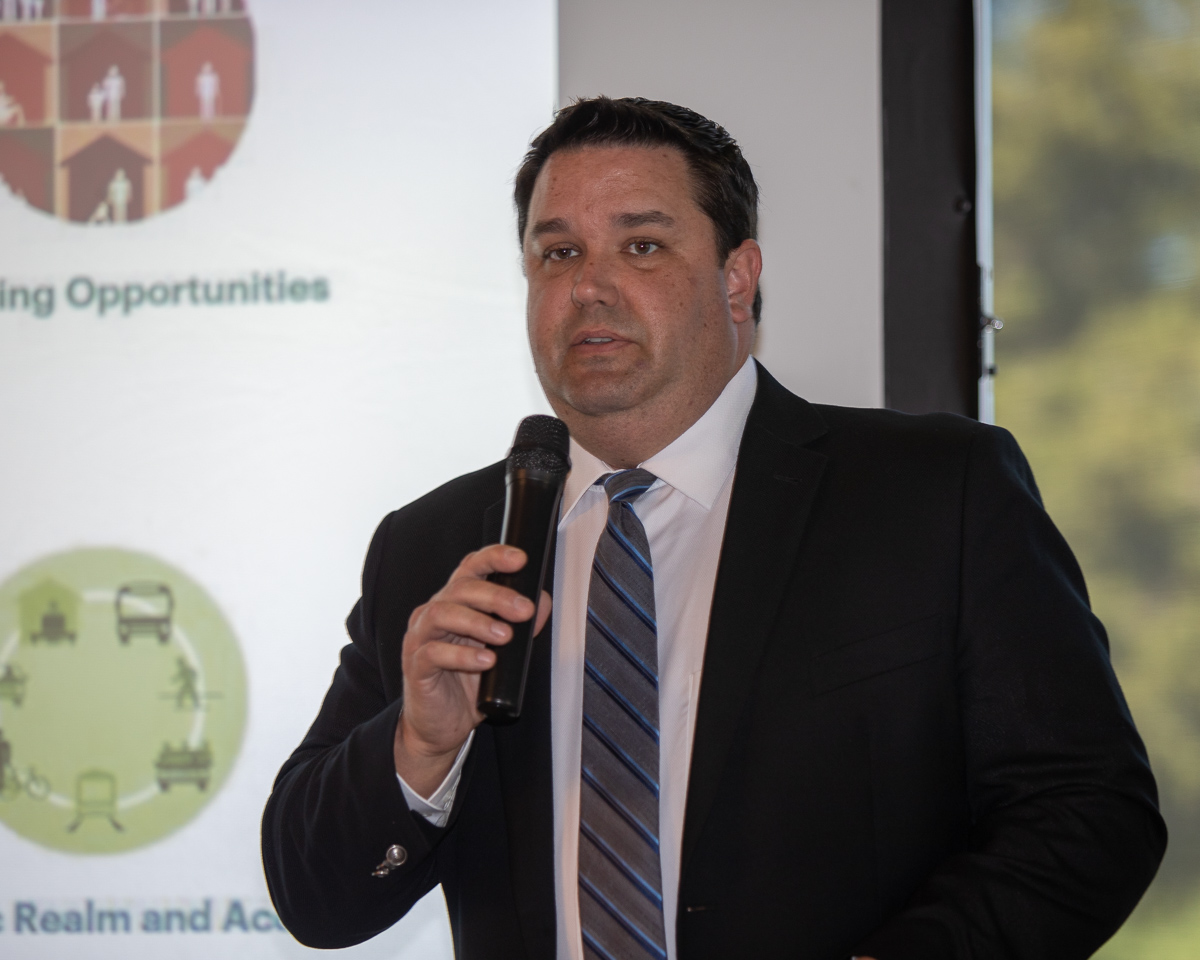 They would then prepare the EIR, it would go to a planning commission hearing for recommendation and the goal is to get it to a council hearing about a year from now in the spring of 2020.

“What we wanted to do is have some publicized goals that we’re working (on) and that we hold ourselves and staff accountable for in terms of delivering them,” he explained.

They developed their focus list a year or two ago to pick “distinct items that the city manager and city staff… to help us understand where we’re strong and where we’re not strong.”  This allows staff and council to focus on a relatively small number of focused items rather than a long laundry list that is hard to follow up on.

“These items have time parameters around them,” he explained.  “These are things that each month we get an update on.”

Mike Webb later talked about the fiscal health of the city, which he said “is in fairly good order” from an operational perspective.  Where there are challenges is “ongoing and increasing costs that are associated with the retirement system and PERS, OPEB – these are things that tend not get cheaper over time.”

He said, “Managing those costs and predicting where they are heading over time becomes crucially important.”

Mike Webb also provided an update to the city’s economic development plan.  Currently the Marriott is being built out on Second and Mace while another hotel, Hyatt House by Davis Diamonds, is currently in the building permit process.

“We have Nugget Market headquarters coming to Davis,” he said.  Other projects he talked about include: University Research Parks, MARS, ADM, Engage3, and Arcadia Biosciences.

Mr. Webb said that they will be announcing that the MARS Corporation is doing tenant improvements at 5th and G.  “They’re bringing into place a number of R&D Research and Development jobs for cocoa research.  They have a 35-year relationship with UC Davis.  So we’re very proud to say that Davis will be their new Cocoa R&D hub.” 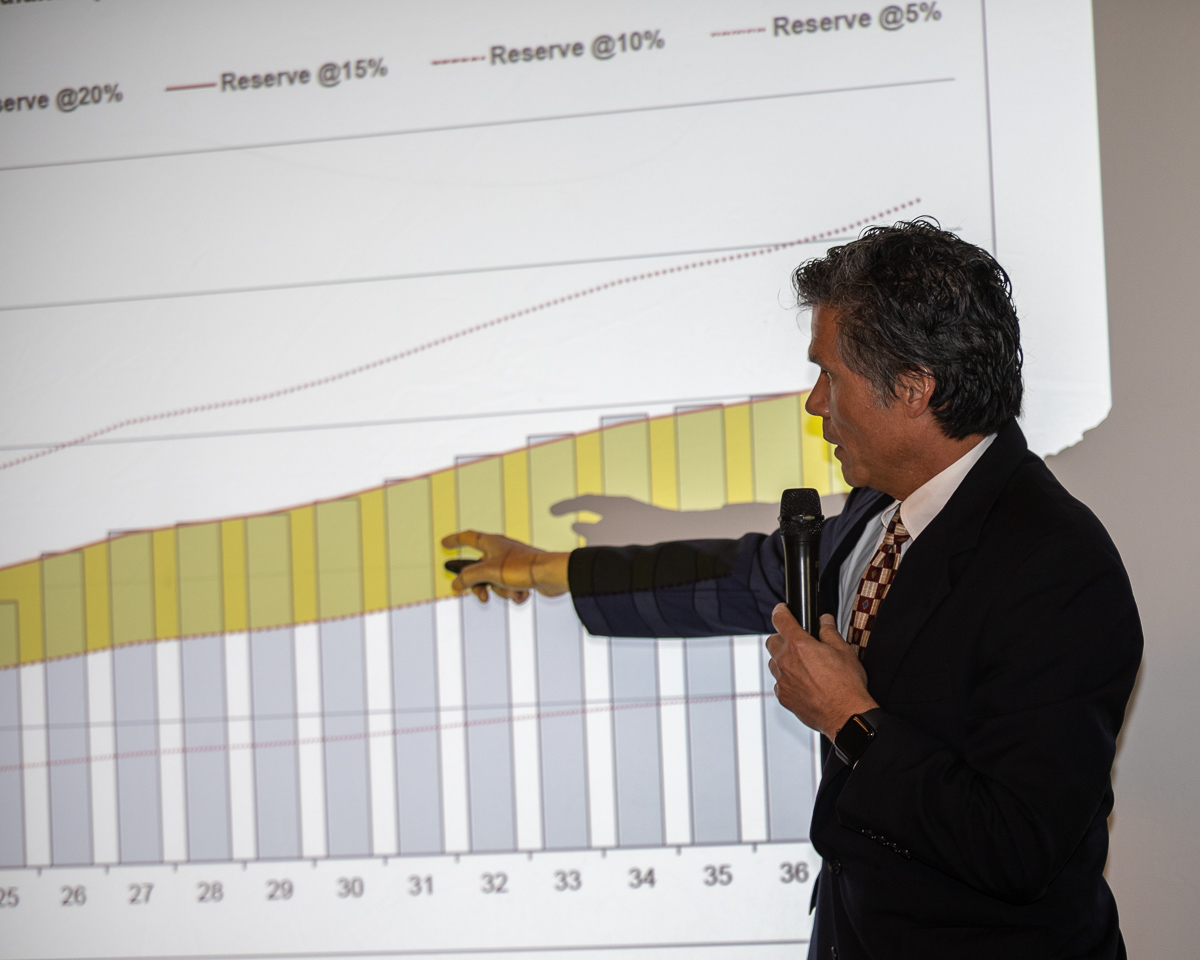 “The relationship with the university,” he said, responding to the first question, “it is back on track.

“For a number of years, we had an odd situation where the city and the university did not really work together,” he explained.  “We sort of pretended to work together.  We would sort of go through the motions – but it was as a courtesy.”  He said, “There wasn’t a real sense that there was a working partnership.

“That really has changed,” he said.  “That moment in time when it changed was where the city, university, and the county came together to discuss housing and enrollment.”

He said the outcome of that was the Memorandum of Understanding that was agreed to last fall on housing and city infrastructure needs, among other things.

Naturally he was asked about paid parking.

“Council is supportive of downtown,” he said.  “We have good intentions.

“The city has limited resources,” he said.  “We don’t have $20 million for a (new) parking garage.

“With paid parking there is this understandable dislike for having to pay for parking,” he explained.  “One of the ideas is to have paid parking because we don’t have the ability financially to build a new garage.”

The mayor also noted that a “good chunk of the people parking in the downtown are employees or actual students.”  He said, “The question is how do we incentivize folks to not use parking spaces which would be better used by people who are shopping in our downtown?

“It’s kind of a tricky situation,” he said.  “I would say that the council is open minded, we want to do what will support downtown.”

He added that paid parking is still an open question for the council.

“When you look at the big picture, it is no surprise that we would look at the idea of paid parking,” he said.

Finally he spoke about a new program for the homeless – a respite center.

The mayor explained that a big problem is that, because the homeless cannot simply go and hang out in neighborhoods or residential areas all day, they go to the downtown where they can blend in a bit better.

However, they have a new idea about where the homeless can go so that they are not in the downtown all day.

He said, “(A) respite center where people can go, where it’s planned that they go there.

The mayor is hoping to have the respite center online by the fall.

3 thoughts on “Mayor and City Manager Discuss Budget, Economic Development and Other Matters of Concern at the State of the City Address”