SACRAMENTO – It’s not summer here quite yet, but the hot seat is getting warm, at least for the Sacramento City Council and Sacramento Police Chief Daniel Hahn, as the reform-the-police uprising enters only its fifth full day Thursday since County District Attorney Anne Marie Schubert announced she would not prosecute two officers who killed unarmed Stephon Clark.

Some of the highlights of the last couple days in a growing, ever moving movement for change, include:

News media were pushed with batons to the ground, participants threatened with “lethal and non-lethal” force for only standing in front of the Folsom Trader Joe’s. Eventually police trapped everyone, allowing them only one way to leave, and as they did that they were trapped and arrested.

SPD claimed there had been some cars “keyed” along the march route, but with about 150 or more bike and ground troops right behind about 150 marchers, and legal observers insisting they did see not any

vandalism, most in the media questioned those claims. And even if they were true, why arrest 84 clergy, reporters and legal observers?

In protests all last year that closed down NBA Sacramento Kings games twice at Golden 1 Arena, and Interstate 5, and city streets at rush hour numerous times, there were only 14 arrests total.

One protest in the wealthy, influential part of Sacramento had 84 arrests. (see our coverage).

Finally, the Sacramento City Council on Tuesday devoted its entire meeting – that lasted nearly four hours, including disruptions – to the arrests in the Fab 40’s. In the end, the mayor and some councilmembers offered they would begin an investigation. 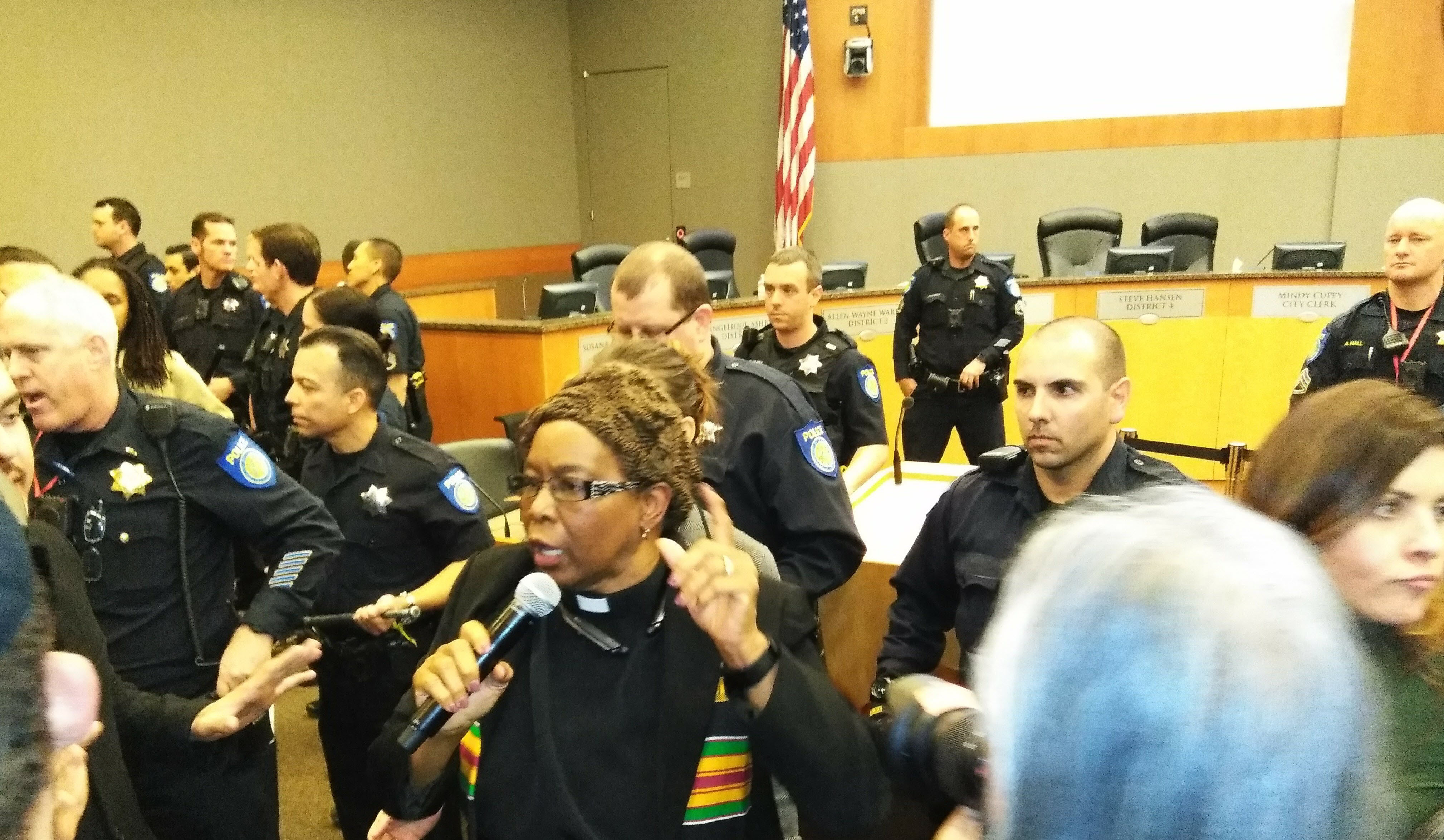 But that didn’t satisfy several hundred people inside and outside council chambers. Among the shots aimed at the entire city council:

“…We arrested peacekeepers (legal observers and clergy) who make sure this town is not set on fire. You know there was a mistake made…You have abdicated your duty…you need to do more….Shame…those are paid assassins, not cops.

“…We’re not cattle to be herded onto a bridge, bleeding, and then arrested…this is the darkest night the City has had to endure; we were zip tied behind our backs and treated like cattle…where is the accountability for what happened last night?

“…You’ve declared war on your citizens….you are allowing cops to beat us up….they were acting like Gestapo…we were trapped like Martin Luther King in Selma.

“…Steinberg (mayor Darrell) get out of your bed when you heard this happening. Enough is enough. Fire Hahn. What about Norm Leong (Capt.) and Howard Chan (city manager)?

“…(Police) pulled out batons on civilians; they were like NAZI…we were brutalized. This is clear redlining. We protest in Oak Park and this doesn’t happen…you were protecting the ‘whiteness’ of East Sacramento…

“…Our system failed the community….Injustice is trauma…you re-opened wounds….you care more about decorum than you do people dying at the hands of a hyper militarized (police)…why should people be peaceful next time? The city is going to burn..

“…I screamed they were hurting me (several people were hospitalized, and one woman’s foot was broken) and all the officer said was shut up…

“…We met for five weeks to discuss the aftermath of the DA decision…can’t believe Hahn didn’t know anything about it…this is going to be your (Steinberg) legacy….voices silenced by the Gestapo.

“…You proved me right last night…you spent millions in training to treat us like this…it ain’t over. Police serve bigots and white supremacy.

“…We’ve heard (excuses) before. At Nuremberg…The NAZI were inspired at how we treated Native Americans….find a single protestor who keyed a car.

“…War tactics were used in AmeriKKKa….why did they move on us when we were done? What reason do we have to be peaceful?”