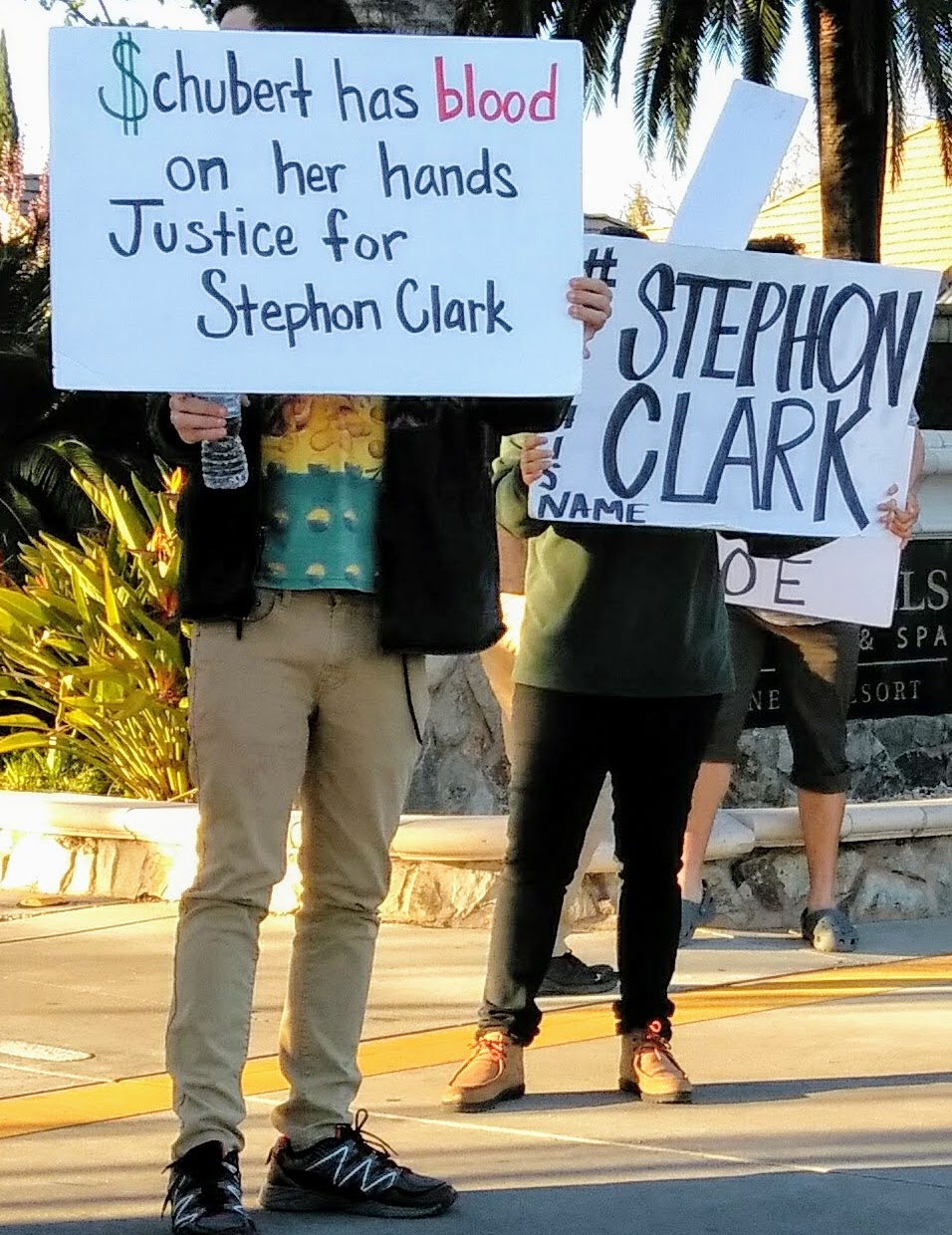 SACRAMENTO – When Sacramento County District Attorney Anne Marie Schubert announced about a month ago that she was not going to prosecute two Sacramento Police Department officers for the shooting death of unarmed Stephon Clark, she was maligned by the social justice community in some high-profile protests.

But maybe she thought she would stop being the target of choice.

Not exactly. Not by a longshot.

In separate protests late this week, Schubert was targeted at very public appearances. And unlike the 100 or so DA office protests that lasted more than six months – and required the installation of a tall fence to separate protestors from the office – these protests were more personal.

Friday night, for instance, when Schubert was to receive the “2019 Person of the Year” award from the Carmichael Chamber of Commerce, dozens of Allies of Black Lives Matter Sacramento activists swarmed the front entrance to the Arden Hills Country Club where she was to pick up the honor.

Calling her “tyrant of the year,” activists sometimes blockaded and slowed down entering vehicles, often jamming traffic along busy Fair Oaks Blvd., as they distributed flyers calling on Schubert to “Do your job.” One organizer noted that there may have been arrests – a half dozen sheriff’s cars ringed the area – if protestors had been people of color. But most were white.

There were arrests Thursday when about a dozen Black Lives Matter Sacramento activists silently held a banner at a Women Lawyers of Sacramento luncheon in downtown Sacramento to hear Schubert share her work about DNA evidence and cold case prosecution.

After about 20 minutes of the silent demonstration, several dozen SPD officers moved in and arrested two activists – who happened to be Black – and chased off others, all of whom had purchased tickets.

Schubert was abruptly cut off from speaking as the activists rose to hold the banner bearing the names of the people been killed by area police. Schubert hasn’t prosecuted any of the city or county law enforcement personnel for killing civilians on her watch – about 30 cases.

“Ms. Schubert has failed prosecute an officer involved shooting during her tenure as District Attorney, which started when she was elected in 2014. The recent decision not to prosecute the officers in the case of Stephon Clark, 22—who was unarmed, on his own property, and no threat to the officers when he was ‘allegedly’ accidentally, extra-judicially executed at home—is the latest in a long line of 32 similar decisions where Ms. Schubert deemed the shooting lawful, despite many of the victims being unarmed,” said BLM Sacramento.

BLM advocates held a sign that simply stated Schubert had “blood on her hands.” 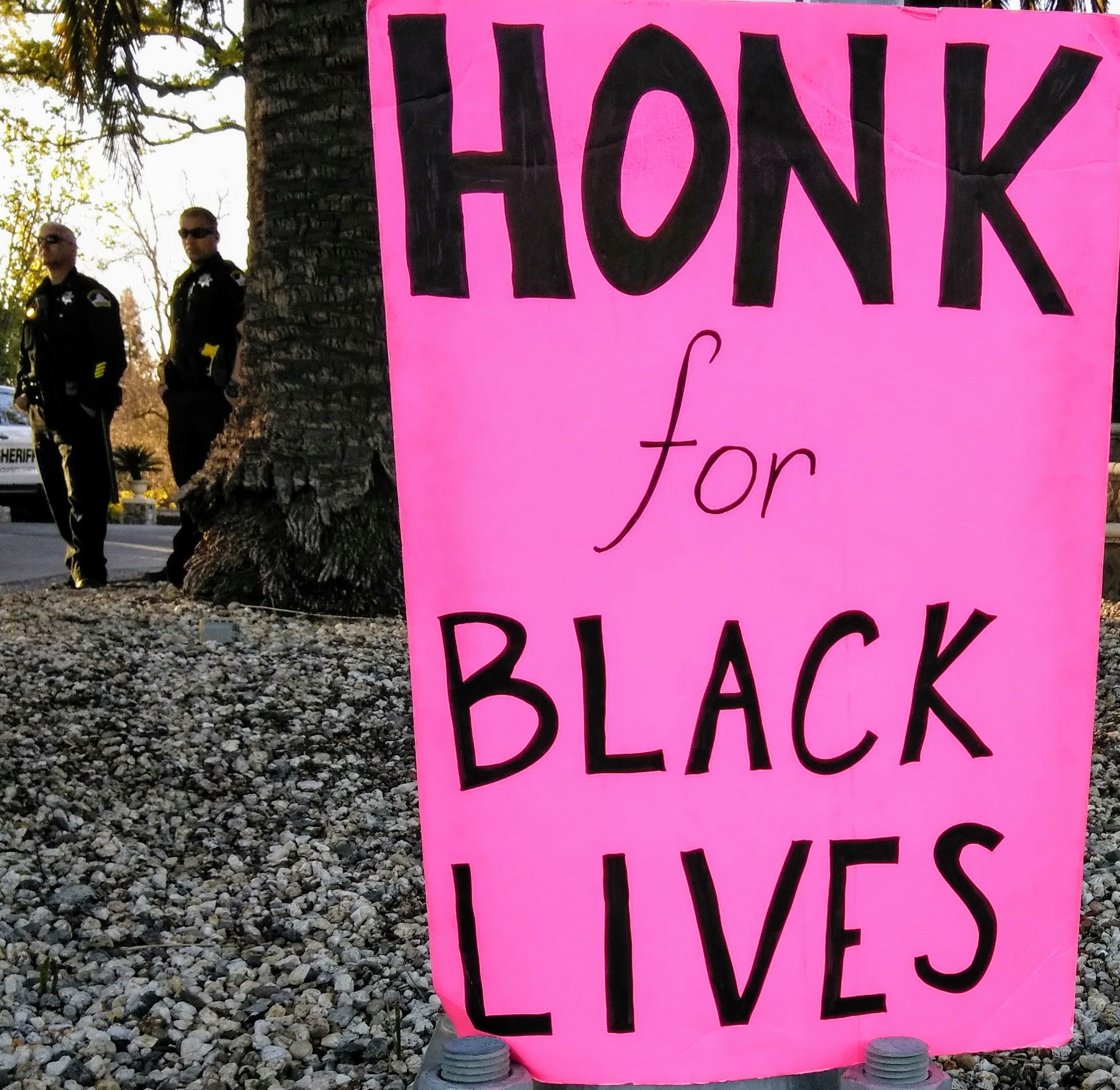 Friday night, the protest was not silent as it was Thursday.

“WTF!!!  (Schubert) is more like Tyrant of the year” exclaimed protestors Friday, adding “Shame on you Anne Marie Schubert! We will not be silent and pretend you deserve any kind of recognition, other than for the tyrant that you are..”

“There are lots of reasons to award Anne Marie as tyrant of the year…So far JUST THIS YEAR she has:

“Refused to talk to Black Lives Matter Sacramento, who stood outside her office for ONE YEAR waiting for her to come out and talk (and) failed to convict officers Terrence Mercadal and Jared

“Not only didn’t convict Stephon’s murderers, but revealed private information about the Clark family and skewered Stephon’s reputation (and) stood silent while her officers trapped arrested 84 peaceful protestors after her announcement

“Spending tax payer dollars on a fence around her office and a bullet proof car she felt she needed, while paying zero attention to the needs of her community! And receiving over $10 thousand dollars in financial contributions, after Stephon’s death, from law enforcement groups… the very groups she is supposedly investigating without bias!”

BLM and allies promised this week – and apparently made good on that promise – to make life “uncomfortable” for Schubert until the following demands are met:

1)    Investigate the officers. During the criminal investigation of officer-involved shootings, the focus should be centered on the officers not the victim.

2)    Limit the scope of the investigation. Consider only the evidence that is known to an officer at the time of the shooting.

3)    Follow the precedent for evidence set by the Stephon Clark investigation. Future investigations into officers should examine the officers’:

4)    Change unclear and unjust laws. Support and champion city, county, and state legislative efforts to change the standard for officers’ use of lethal force, such as AB 392 (Weber) and the Sacramento Police Commission recommendations presented to Sacramento City Council on March 26, 2019.