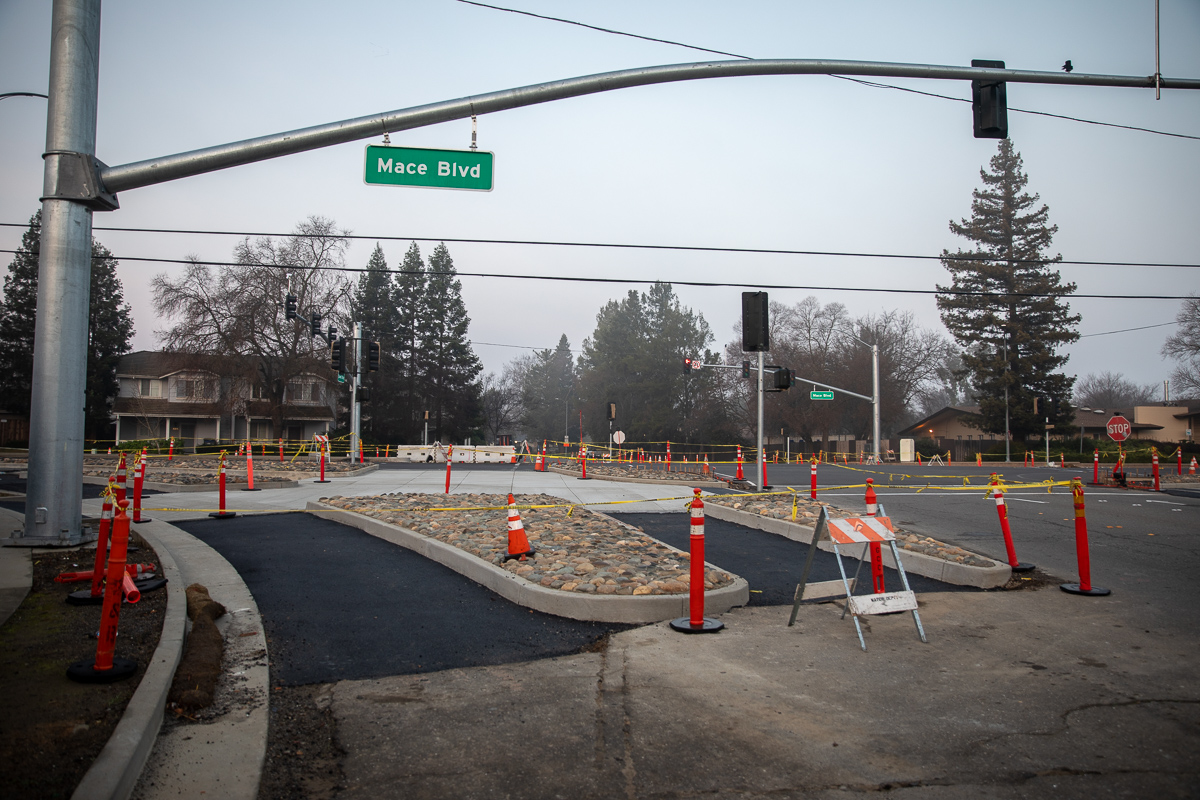 In the last several weeks, the city has continued to receive many complaints about congestion and traffic impacts related to Mace Boulevard.  Police Chief Darren Pytel explained to the Vanguard that in the wake of some of these complaints, the city will starting laying out changes ahead of a scheduled April 11 meeting at the South Davis Fire Station.

“It’s pretty obvious that there’s a couple of tweaks that need to be made to the design out there,” Chief Pytel said via a phone interview on Thursday.  The city went ahead and completed the road on Wednesday by finishing the pavement, even though those changes would not preclude changes at a later point in time.

“The engineers have been spending a couple of days working on some of the tweaks,” he said.  He said they plan on being able to roll out “a laundry list of suggestions to the public next week at the April 11 meeting.”

Their plan is to get feedback from the public at the April 11 meeting in the hopes of getting this issue formally in front of council for the April 28 meeting (at the earliest) or early May.  The hope is to have a plan in place by the time the May 15 meeting comes around.

“There are so many people providing misinformation,” he said.  “That’s one of the things we are trying to get on top of.”

Chief Pytel explained that “some of the concrete work is obviously reversible.”  He noted they will do lane striping, but using paint “which is easy to lay over” as opposed to normal striping which would require grounding out, which is more expensive to do.

“We’re trying to make it the safest we can during this interim period,” he said.  “We’re definitely listening to the community

concerns, some of them are quite valid.”

He explained that when he went out to view the road, there were immediately a couple of changes that had to be made.  Chief Pytel had concerns that are a bit different from some of the public concerns.  He believes, for instance, that at the Mace and Cowell intersection the corners are “too tight” and drivers unfamiliar with the roadway could end up in the opposing traffic lane when they make a right turn.  They need to allow for more room to make those turns.

At San Marino, he explained there are some visibility and line-of-sight issues for people coming out of San Marino onto Mace.  “We’re doing traffic counts to see if we can put in stop signs or even a light there,” he said, to reconfigure that intersection to make it safer.

“One of the suggestions is going to be to increase (Mace) back to four lanes in the stretch between El Macero and Cowell,” he said.  “The fortunate thing is that area is really wide.  By re-tooling some of the bike tracks, that can probably be accomplished to alleviate some of the congestion.”

But the big fixes have to do with the on-ramp to I-80.

He said that the city has contacted Caltrans to figure out ways to deal with the on-ramps so that “more cars can be queued on the on-ramps, which will hopefully reduce the number of cars queued on Mace Blvd. and Chiles, which is really where the fundamental thing creating the issues with the gridlock out there.

“There’s not much we can do about all the traffic apps re-routing traffic,” he said.  “They’re basic algorithms and they’re public roads so we can’t really stop people from using them.

“We think the key is trying to reduce the cars queuing on Mace Blvd. and Chiles and hopefully that should alleviate some of the gridlock,” he said.  “So at least all the local people can get to other streets and around the area.”

Chief Pytel told the Vanguard that they weren’t able to get traffic counts of cars coming from outside the city and using Mace as the access point to I-80.

They do, however, have data on traffic by time periods, with the caveat that some of the data will be skewed due to a lot of roadwork.  In addition, the spring break last week allowed for a brief respite in the traffic impacts along the corridor.

“Last week was really not representative of a normal week because the schools were out,” he explained.  “I sent an officer out there on Thursday and Friday night which was the reported worst time, and traffic was smooth sailing.”

That was not a representative week, he said: “We realize that.”

The biggest problem times are Thursday and Friday during peak hours, as most people have been aware.  The traffic starts as early as 3 pm and goes as late as 7:30 or 8 pm.

Using mapping technology, “You can definitely see Mace, Chiles, and Cowell pretty severely impacted by what appears to be freeway traffic during these times,” he explained.  “Most of the other days in the week, you can kind of get through.”

Monday, he said, is really good, then it picks up on Tuesday and Wednesday.  “Thursday is actually some of the worst traffic,” he said.  “It appears that a lot of the UCD students and staff, who are leaving town, are leaving on Thursdays because traffic really backs up coming off campus.”

They will be meeting on Thursday, April 11, at 6 pm at the South Davis Fire Station to lay out some preliminary analysis and get feedback.