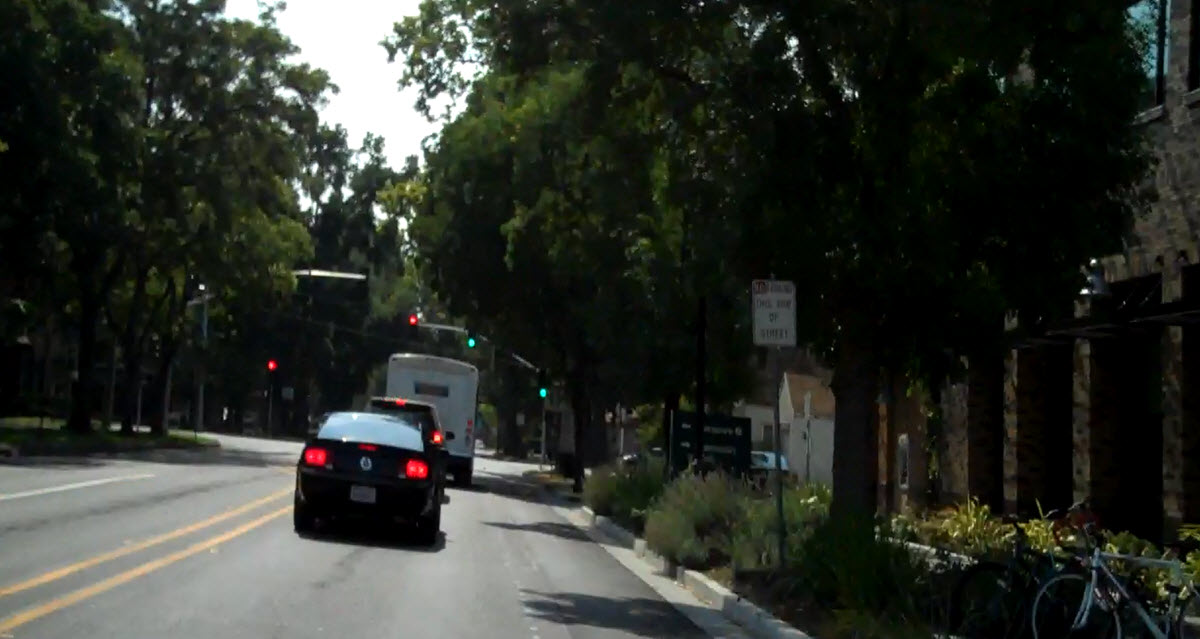 Clearly there are some unanticipated problems with the redesign of Mace Boulevard, but some critics have turned this into an opportunity to attack the “complete streets” concept itself.  On Sunday, I took issue with the notion pushed in the Enterprise by their editorial and by columnist Bob Dunning that the road redesign was a way to encourage alternative transportation by punishing those who drive motor vehicles.

But there was a second point in Mr. Dunning’s column that needed to be addressed.

Mr. Dunning writes: “After the city put a portion of Fifth Street in East Davis on the Atkins Diet a few years ago, those in charge of making such decisions declared it a roaring success. The only problem is that much of that traffic simply shifted over to once-pleasant East Eighth Street, which is now an early-morning and late-afternoon nightmare. Put simply, it’s a vehicular form of robbing Peter to pay Paul.”

He argues: “Morning traffic on Eighth has reached that dangerous stage where frustrated drivers roar out of line and speed down side streets, just as school kids are leaving home on their bicycles.”

Later he writes: “The Fifth Street diet didn’t take cars off the road, it just moved them somewhere else.”

But there is a problem with this view – it ignores what has else has taken place.

I experienced this problem on Eighth Street earlier this year.  Around 5 pm on an evening, I dropped my daughter off at soccer practice at Civics Field and then cut up Eighth Street to drive to Pole Line.  Only one problem: I got caught up in a ridiculous traffic back up.

So I cut down F Street to Fifth Street and it was smooth sailing over to Pole Line.

The second problem with that theory is one of timing.  Up until the last several months, Eighth Street, long after the Fifth Street redesign, was fine.  Maybe there was slightly more traffic, but

nothing to cause concern.

When did it become a problem?  It seems to be that a big cause of that is the work done on both L Street and Pole Line that has altered traffic patterns temporarily and pushed a lot more traffic onto Eighth Street.

By way of example, yesterday L Street was closed off.  That led to a large amount of congestion between L and Pole Line on Fifth Street, as traffic that would normally head north on L had to drive to Pole Line and then head north.

The other point worth making is that when the highways back up, all of the west to east roads in Davis do so as well.  I’ve already noted what happened on Mace Blvd. to the north as you drive from Harper Junior High to the freeway onramp, but on Thursdays and Fridays, all the roads that go west to east are congested in Davis – as both local and out of town traffic attempts to avoid the bottleneck on I-80 and creates bottlenecks on surface streets.

The overall problem I see right now is that critics are blaming road redesigns for problems that really are caused by things that are external to those road work.  The changes in traffic patterns, congestion on the highway, and road construction is causing changes to traffic flows – a lot of which will end up being temporary in nature.

That is the problem I have with the critics on Mace Blvd.  The identified problems clearly need to be addressed: tight right turns, the San Marino intersection, the ability for farm equipment to transport through, and perhaps the need to help queue on-coming traffic onto I-80.

But the core issue of congestion is more likely not related to the redesign but rather coincidental to it.  While the council and city are being pushed to quickly address community and local concerns, we might be better served in the long run with a more thorough analysis.

As the Bob Dunning column demonstrates, the immediate reaction might not be true – and it might be an overreaction.

31 thoughts on “Commentary: When Critics Get It Wrong”