The Davis City Council passed two motions on Tuesday night with respect to Mace Boulevard – the first asking staff to immediately make changes to the Mace and San Marino intersection, along with the turn radiuses at Mace and Cowell.  In addition, they directed the city manager to work with design firms to implement Staff Recommendation 2.

Unlike previous public outreach sessions, the public was actually fairly evenly split between sticking with the current changes now that traffic has settled down, and going back to a more original layout with four lanes and turn pockets.

Both Mayor Pro Tem Gloria Partida and Councilmember Lucas Frerichs were willing to take a pause to assess the road situation without the construction.  However, Mayor Brett Lee pushed for changes which themselves would take a little bit of time to implement.

designs put before us, average people are able to make suggestions to slightly improve the average design.

“This is good, but I believe there’s better,” he said.

What the mayor was looking to do is to utilize the expertise of design firms that are meant to be the experts, and give them a broader range to address the concerns on Mace.

“We give that to the professional designers and they can incorporate it,” he said.  “We don’t have that expertise…  I’m extremely reluctant to follow a process that didn’t work before.”

The mayor said he believed we should be able to both restore traffic capacity on Mace and have bicycle safety.

Councilmember Will Arnold said that traffic apps all do the same thing, which is time the traffic patterns and direct people to use the most efficient route.

“There may be ways to design our roads and our intersections to address that… but there’s really not that much we can do about that,” he said.  “It is an issue in a lot of places.  It just so happens that South Davis is right before a bridge which is a causeway which means there’s no other way once you get to Mace, you have to get on the freeway soon.”

He noted that CalTrans does have a project in the pipeline to add a vehicle lane in a couple of directions on I-80 from Kidwell to past Sacramento.  “But that is years off,” he said.  “Their traffic projects indicate it’s only going to get more impacted.” 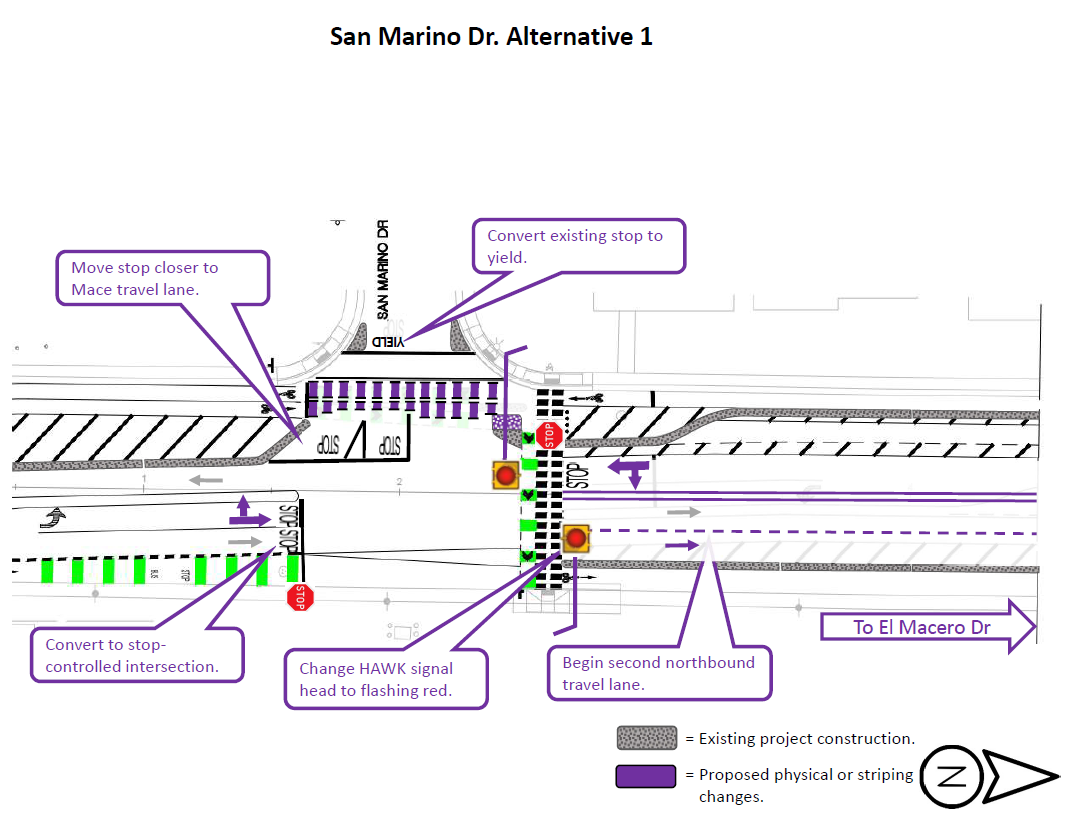 Councilmember Arnold explained, “This issue has caused for me probably more frustration then maybe any other issue that we’ve faced on city council in my tenure.

“This issue is and continues to be shrouded in a lack of clarity about what led us to where we are today,” he said.  “There were clearly some breakdowns in process here…  I think we ought to look into where some of these breakdowns took place and how to avoid them in the future.”

For Councilmember Dan Carson, he said that he was fine using the staff recommendation as the starting point.

He noted, like his colleagues, that he was uncomfortable bringing right turn lanes and right turn pockets back – and pointed out that many of the studies put forward by the public to support these lanes are 17 years old or older.

Lucas Frerichs said, “I’m fine with the design being in place for an amount of time to just see how folks are adjusting to it.”

But he said he was worried about making changes in either the summer or the fall.

“I certainly am really supportive of the overall goals of the project,” he said.  “I think Mace previously was unsafe for all modes (of transportation).”

He gave the example of San Marino and argued that, before the project, “it was an unsafe intersection.

“I do think there are a variety of safety improvements that are needed as it exists today,” he said.

He laid out some of them for San Marino, and he was concerned about fire engines being unable to enter the roadway due to traffic being backed up and believed, on that block, there needs to be two southbound lanes; he also cited the turn radiuses at Mace and Cowell.

“Overall I think there needs to be a little bit of a pause,” he said.  “Not a lengthy one… just to see the flows and how things are playing out.

“What’s happening at ski season at peak capacity is not necessarily how things are now,” he said, noting that they should look at things more holistically but at the same time he pushed for safety adjustments that staff can address immediately.

Gloria Partida said, “It makes a lot of sense to go slowly and to take our time, to make this as best as we can.”

She was pleased to hear from parents, since she felt like many did not come out to express their concerns about the safety on the roadway previously, and their voices had been drowned out by the crowd pushing for complete restoration of the previous structure.

She said, “It is interesting that after the construction cleared out, we started hearing positive feedback.”  She said, “It is wise for us to step back and proceed thoughtfully.”

Of the members of council, it was Mayor Lee who most forcefully pushed for changes to the current roadway over and above addressing safety concerns.

From his perspective, the council lacked expertise to present staff with design items.  Instead, he felt they were giving staff “a rough idea about how to address these challenges” and he wanted design experts to come back and present the council with concrete proposals.

City Manager Mike Webb explained, “We would want to seek that professional design input.  That may result in some different ideas.”

Will Arnold said, “We want a design that’s one that’s going to work for the folks that travel this corridor everyday.  We want that design to last and be future proof as best as possible.  We’re not the right folks to be taking pen to paper right now to do that.”

Gloria Partida pointed out that “when you get that input (from expert designers) you have to take into account our community.”  She said that some things make sense from a professional standpoint, “but I think that is sort of part of the problem here.”

She explained that the road design was supposed to make the roadway better for bicyclists, but, in so doing, “other problems were created.”

Public Works Director Bob Clarke explained that such an approach is not going to take weeks or a month, but “it’s going to be months.”  Then he clarified, saying, “I’m saying June to July, not May,” while at the same time not talking about August or September for the new designs and plans to be implemented.

Council was agreeable to that approach and put out a formal motion to address immediate concerns like San Marino and the turn radiuses, while allowing design firms to work out the overall details of the project within the parameters already laid out by council – partial return to four lanes, but not right turn pockets.

8 thoughts on “Council Approves Changes, Will Have Experts Come Up with Design Proposal on Mace”