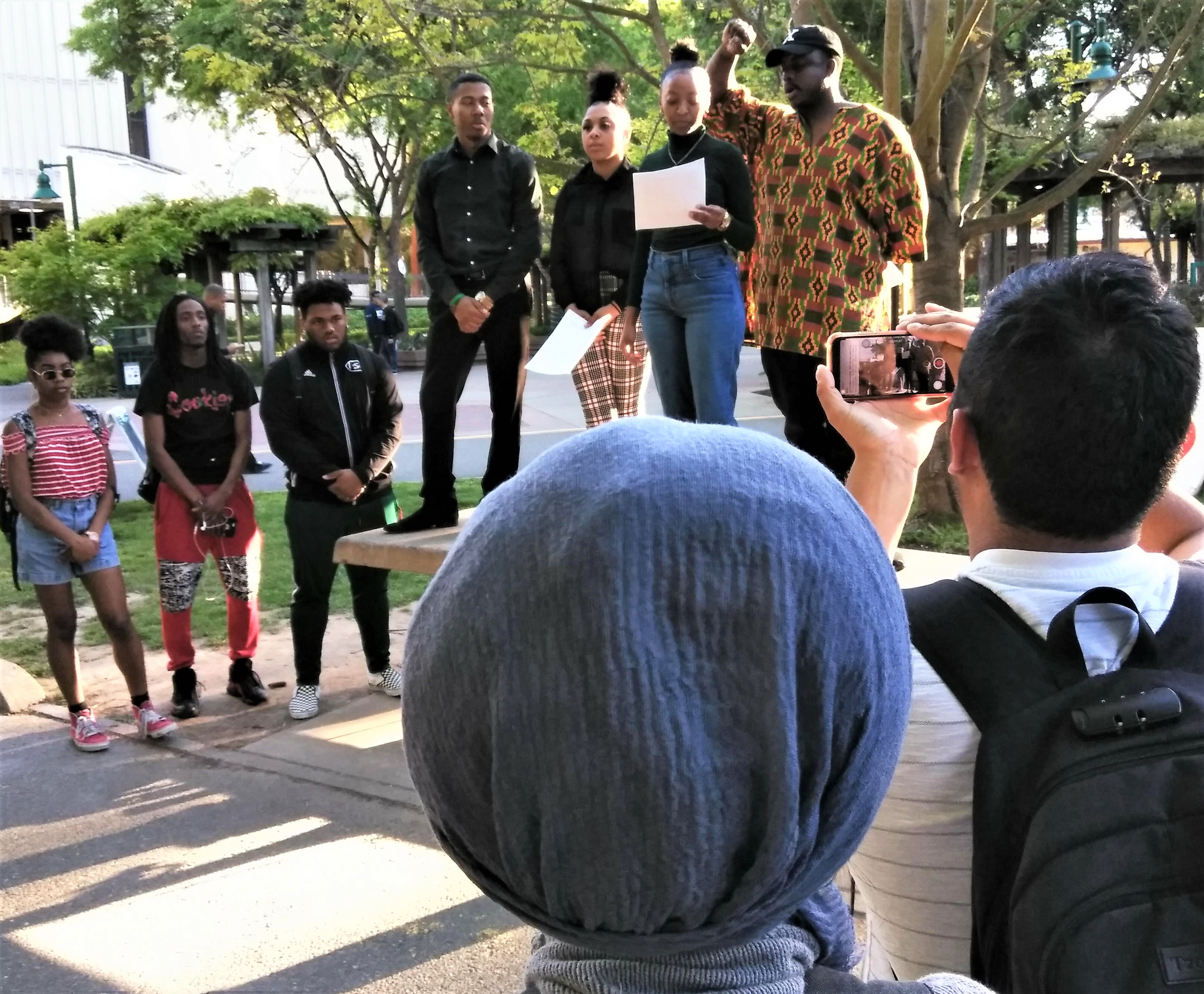 SACRAMENTO – A coalition of Black Students has revealed to the Davis Vanguard that it is organizing – along with students groups throughout the state and nation – a massive walkout of high school and college students next month to call for police gun reform.

The student walkout – set for May 2 at 12 Noon – is “in support of our student peers in Washington D.C. who organized ‘March For Our Lives’ in March 2018 to protest gun violence” after the Parkland, FL shootings, said Sacramento organizers.

About 500 high school, community college and university students left classes in early March to march to the Capitol in support of legislation to limit the use of deadly force by law enforcement.

“March For Our Lives Too is a march in solidarity that distinctly addresses the thousands of victims of gun violence at the hands of the police departments across the nation. This march is to call for policy and legislative reform,” said Christine Hunter of the coalition.

May 2 was chosen specifically said the coalition of Black Students “to reiterate the demand the Black Panther Party initiated on May 2, 1967…when they marched on the Sacramento Capitol (building)

to protest and demand an end to police murder and brutality in our communities. Over 50 years later we are reiterating this demand,” Hunter added.

A key focus on this march is the passage of new laws to rein in police use of force, including and especially AB 392, which just passed its first committee test.

“This is an act to save lives. Police in California kill community members at a rate of 37 percent higher than the nation average and several state police departments have (some of) the highest rates of killings in the country,” said recent Sacramento State University grad Khalil Ferguson.

The state’s penal code relating to police use of force hasn’t been amended since 1872, just nine years after the signing of the Emancipation Proclamation, noted Ferguson. Indeed, AB 392 failed to move through the Legislature last year.

Ferguson, in his support of the student walkout, suggested he didn’t necessarily trust that some Democrats – the party has voiced overwhelming support for AB 392 – wouldn’t help kill the measure.

“It is clear that moderate Democrats have played a role in the (lack of ) progression of Black social and economic mobility…(AB 392) faced opposition from moderate Democrats immediately,” said Ferguson, pointing out that 16 Democrats co-authored an opposition bill, AB 230, that is backed by police unions and that has no penalty for misconduct.

Ferguson quoted the Rev. Martin Luther King Jr. when he said, “the Negro’s great stumbling block in his stride toward freedom is not…the Ku Klux Klanner, but the white moderate, who is more devoted to order than to justice.”

The “March For Our Lives Too” has six “pillars,” which students “demand to be implemented,” including criminalizing the use of deadly force, instituting independent investigations of police use of force, demilitarizing police forces, full police accountability, mental health crisis services and acknowledgement and apology for historical investigations.

Johnson called this “inequity” in the law that allows police to “claim” they are in fear for their lives” as a get-out-of-jail card wrong and said it allows officers to neglect training and not de-escalate in situations in favor of firing their weapons.

“This results in the killing of unarmed citizens,” added Robinson. “It is imperative to create language that outlines when the use of deadly force is lawful and a criminal act. By doing this we are affirming the lives of our citizens, while equally protecting the lives of our officers,” he said.

Another “pillar” is police accountability.

“We can’t rely on citizens to follow the laws if the police aren’t even doing so…police need to report their (actions), and drug testing (of officers) should be mandatory,” said Keishay Swygert, adding the “Blue Lives Matter” flag “needs to be abolished to respect Black lives.”

“We demand police demilitarization to create safer communities. A peaceful protest should not escalate police force in riot gear in a military force manner,” said Swygert, who said the group demands the creation of “de-escalation tactics” in place of “any military force being used as an option in peaceful protests.”

Robinson highlighted the “inherent conflict” between the district attorney and police – in Sacramento, for instance, Sacramento County DA Anne Marie Schubert has failed to ever charge a law enforcement officer in about 30 instances, including the killing of unarmed Stephon Clark about a year ago. Clark only had a cell phone in his hand as he attempted to go into his grandparents’ home where he lived.

“When police unions are donating tens or hundreds of thousands of dollars to district attorneys, how can (DAs) objectively prosecute the police? The conflict is clear and would be illegal in other professions,” Robinson said, calling for independent prosecution and investigations of officer who use deadly force.

“With the implementation of training and de-escalation tactics, we can reduce the percentage of scenarios that end in death. The police (can) redirect someone away from the criminal justice system if appropriate and into treatment that can lead to positive outcomes for the individuals and the community,” Hunter said.