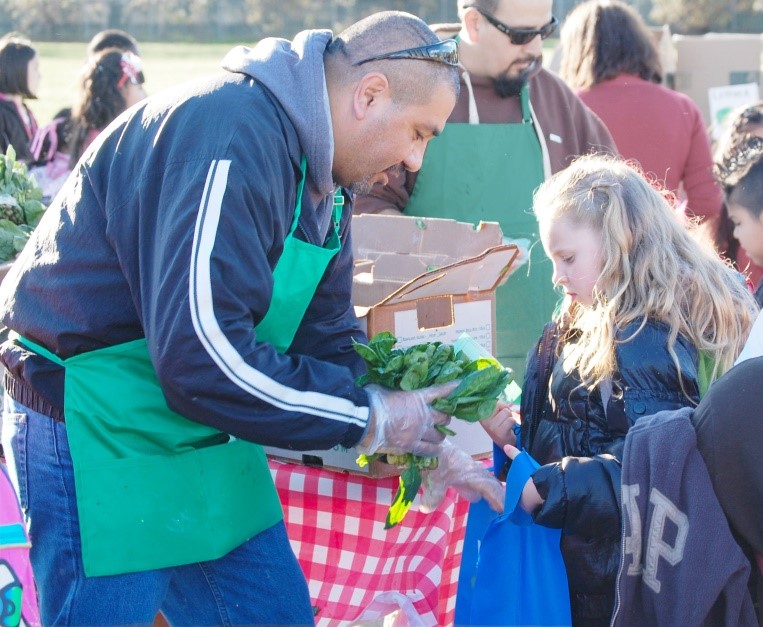 In the run-up to the May 2nd Big Day of Giving, what follows is an article from the Sacramento Region Community Foundation about the work of the Yolo Food Bank and the Sacramento Food Bank & Family Services to address food insecurity and poverty in our region.

As the recent partial shutdown of the federal government dragged on, food banks in the Sacramento region confronted a number of uncertainties: Would a potential disruption in benefits from CalFresh, a federal program for people with low-income who want to put healthy and nutritious food on the table, result in an unprecedented demand for emergency food from its 245,000 capital area recipients? And, after weeks without pay, would furloughed federal workers and contractors need to rely on neighborhood food agencies while they waited for the government to reopen?

“The situation was evolving every day at the federal level, which made it challenging to plan food distributions, and challenging to explain to many of the people we serve whether or not they should expect to receive their CalFresh benefits the next month,” said Blake Young, President/CEO of Sacramento Food Bank & Family Services (SFBFS).

In Yolo County, the Yolo Food Bank (YFB) offered food distributions specifically for furloughed federal employees. Every Friday, from 10 a.m. to 2 p.m., federal employees with an ID were invited to collect up to 30 pounds of food; during the four distributions, about 100 employees received food at YFB, according to Michael Bisch, its Executive Director.

But Bisch noted that, even when the government is fully funded, food insecurity—the limited or uncertain ability to acquire nutritionally adequate and safe foods—is a scourge in the Sacramento region, despite the area’s agricultural abundance.

“The sheer magnitude of food insecurity throughout the Sacramento region is astounding, but there is so little awareness of it,” he said. “We are talking about hundreds of thousands of our

neighbors who do not have adequate access to nutritious and safe foods. This is an issue with far-reaching societal impacts—health issues, poor educational outcomes, lower social mobility—which we have to acknowledge and address.”

Though hunger is commonly associated with homelessness, it affects millions of other people across the nation. According to Bisch, YFB’s clients are largely working individuals and families whose incomes fall short of their needs, or who have suffered a financial shock—people who might be called “the hidden hungry.”

“The people we serve look no different than food secure individuals, yet their health and wellness are very different. These are capable, hardworking families who make hard choices between paying to keep a roof over their heads, or for medical care, or for their children’s classes, or for food. And, in the end, the budget doesn’t always have room for food.”

As the shortfall between family incomes and the cost of living in the Sacramento region increases, more and more become vulnerable to food insecurity. The numbers are already harrowing: Data from Feeding America show that 14 percent of residents in Yolo County were food insecure in 2016. In Sacramento County, that number climbed to 16 percent of residents, or over 230,000 people.

According to Young, SFBFS and its 220 Partner Agencies received visits from 150,000 men, women and children per month in 2018. With a significant unmet need in Sacramento County, SFBFS estimates it would need to distribute an additional 24,844,000 pounds of food annually to feed all of the food insecure in its service area, many of whom are children, seniors, and others among the hidden hungry.

Armed with data, the region’s food banks are working to address food insecurity in innovative ways. In partnership with the Foundation, for example, SFBFS recently streamlined its system of Partner Agencies, building a more effective and efficient emergency food distribution system to escalate the fight against hunger in Sacramento County.

Because of that sustained collaboration, it has improved its use of computers and databases to track the food its agencies distribute, purchased more trucks and forklifts to move food pallets with ease throughout Sacramento County, and has increased its refrigeration storage to keep foods fresh.

That partnership with SFBFS advanced one goal of the Food System Action Plan, the Foundation-funded report which recommends strategies to strengthen the region’s food system that is part of our initiative to Connect the Regional Food Economy. To continue improving the system, the Foundation is working with Young, Bisch, and other leaders from the food economy—local farmers, distributors, and grocers—to guide the future of our collective effort to build a healthier, more accessible food system throughout the region.

“I’m optimistic about finding collaborative solutions. There is plenty of food available in this region, and we need to move it from where there is surplus to where there is need. We need to address barriers and efficiently mobilize our resources. Together, we can do this.”

There’s no need to wait to NOURISH YOLO! Please pre-schedule your Big Day of Giving donation beginning TODAY for Yolo Food Bank’s initiative to raise the nutritional paradigm of Yolo County, maximizing the potential of our new facility to nourish all who are hungry in our community. Give and learn more about more about our $100,000 BDOG goal at bit.ly/BDOGYFB2019. Thank you!

Share:
Tags:Food SecurityYolo Food Bank
Previous : Man Arrested after Illegal Possession of a Firearm
Next : Analysis: How California Can Solve Its Housing Crisis