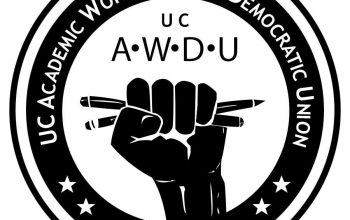 Last Saturday (April 20) there was supposed to be a Statewide Membership Meeting (SMM) in Santa Cruz to discuss and vote on an appeal of the weak contract that was undemocratically pushed through by UAW bosses over the summer but once again, UAW management has undermined democracy. Despite the UAW administration’s authoritarian practices throughout (as well as before and after) last summer’s contract ratification process, members of UAW 2865 (which covers TAs, AIs, Readers, and Paid Tutors) tried to address the harm that was done during that whole ordeal through formal UAW procedures. First, an official appeal was filed and then after the executive board of UAW 2865 (eboard), many of whom are directly implicated in the appeal since they were part of the group that misled members along with abusing their power by engaging in undemocratic practices, rejected the appeal, it was appealed further. More specifically, it was appealed to the next SMM or JC (Joint Council; a legislative body) meeting, whichever is sooner, per Section 5 of Article 19 of UAW 2865’s bylaws. At that point, and again in accordance with UAW 2865’s bylaws (Article 4, Section 5), over 100 members of UAW 2865 signed a petition to have such an SMM at UCSC (UC Santa Cruz) on April 20 but UAW 2865 bosses decided to disregard the members and hold it tomorrow (Saturday, April 27) at UCLA instead.

While they claim that this was done to promote democracy, it’s clear that this is yet another undemocratic decision made for political reasons and designed to silence dissent. UAW 2865’s Administration (Admin) Caucus (i.e. those who support a corporate management structure, including a few bosses who make most of UAW 2865’s major decisions at the moment) has a strong presence at UCLA while the more progressive elements of UAW 2865 have a strong presence at UCSC. UAW 2865’s “leaders” (bosses) seem to be arguing that having the meeting at UCLA is more democratic because UCLA is more centrally

located among the 9 UC teaching campuses (where most of UAW 2865’s members are) but UCSC, as well as UC Santa Barbara (UCSB), are rather centrally located as well. It would also make sense to choose a UC campus that’s relatively central but a bit farther north and coastal (like UCSC or UCSB) since most southern UC campuses (including UCLA) are coastal while two of the northern UC campuses (UC Davis and UC Merced) are inland (which increases travel times). On top of this, democracy includes promoting access to statewide meetings which means, among other things, rotating them around to different campuses and it’s been quite awhile (at least 2 years) since UAW 2865 had a statewide meeting in Santa Cruz while the last statewide meeting at UCLA was less than a year ago in October of 2018 (and the last one in Santa Barbara happened just a few months ago in January of 2019). It’s also important to note that the petition calling for this meeting explicitly listed its date and location so it’s reasonable to assume that at least some of those who signed the petition may not have signed it if they thought the meeting might occur at a different time or place.

Beyond fundamental questions of democracy and representation, UAW 2865’s bosses claim that they have the authority to choose this SMM’s location and date even though it was called for by the membership rather than the eboard or JC (which also have the ability to call a Special SMM). While the bylaws aren’t explicit about this, the implication is that whoever calls for an SMM chooses its date and location (if the JC called for an SMM would the eboard get to choose its date and location even if their decision conflicted with the JC’s wishes; I somehow doubt it and I doubt UAW 2865’s bosses would think so either). If anything, an SMM that’s directly called for by the membership should override one that’s called for by the JC or eboard since supposedly “the membership is the highest authority” of UAW 2865 (Article 5, Section 1 of UAW 2865’s bylaws).

In addition to voting to change the date and location of the SMM (in an undemocratic and unbylawful way), UAW 2865’s bosses also voted to move the JC meeting that was originally going to occur in Davis on April 27 to UCLA while maintaining the original date (in order to have the JC meeting coincide with the SMM). As you can probably guess by now, this was an undemocratic decision meant to stifle dissent and opposition to the bosses’ predetermined narrative and actions. First off, it means that the bosses’ travel expenses to the meeting will be covered while the expenses of everyday members probably won’t be (and even if they are, who knows when or how we’d find out about such reimbursements). Secondly, it’s been over a year since Davis hosted a statewide UAW 2865 meeting (significantly longer than UCLA), though there have been statewide meetings in Davis much more recently than there have been in Santa Cruz. Finally, it shouldn’t be surprising to learn that the more progressive elements of UAW 2865 have a fairly strong presence in Davis as well even if they’re not as strong as they are in Santa Cruz. On the procedural side, this move is a blatant violation of UAW 2865’s bylaws. Article 8, Section 8 says (in part) that “the Joint Council shall call a regular quarterly meeting in October, January, April, and July at a location to be determined by the Joint Council at the previous meeting.” The location of the April meeting was determined (and approved) by the JC at the previous (January) meeting. The JC chose Davis.

By now it should be obvious that UAW 2865 and its bosses (much like the International UAW) is an authoritarian bureaucracy that’s incompetent at best and uncaring at worst while not even following their own policies and procedures. So far, the resistance to their harmful and controlling tendencies has largely focused on working within their framework and on their terms but as is the case with most businesses (like the UC), this tactic is very limited and even then it works better when used in conjunction with more direct approaches. If you’re interested in the possibility of taking such an approach to UAW corruption and/or are interested in potentially organizing UC Students and Workers independently of the UAW while allying with them on certain issues (like grievances around contract violations) let me know. And either way remember that collective action gets the goods (whether it’s directed at the UC, Stop & Shop, or the UAW)!

Connor Gorman is a 6th year physics grad student at UC Davis and an ex-trustee (on the executive board) of UAW 2865, having resigned in February due to the toxic, hostile, and oppressive environment. I’m also involved with a variety of other political groups on and off campus including Students and Workers Ending Racial Violence (SWERV), the Young Democratic Socialists of America (YDSA) at UC Davis, United Students Against Sweatshops (USAS) at UC Davis, the Yolo County Green Party, and Davis People Power.