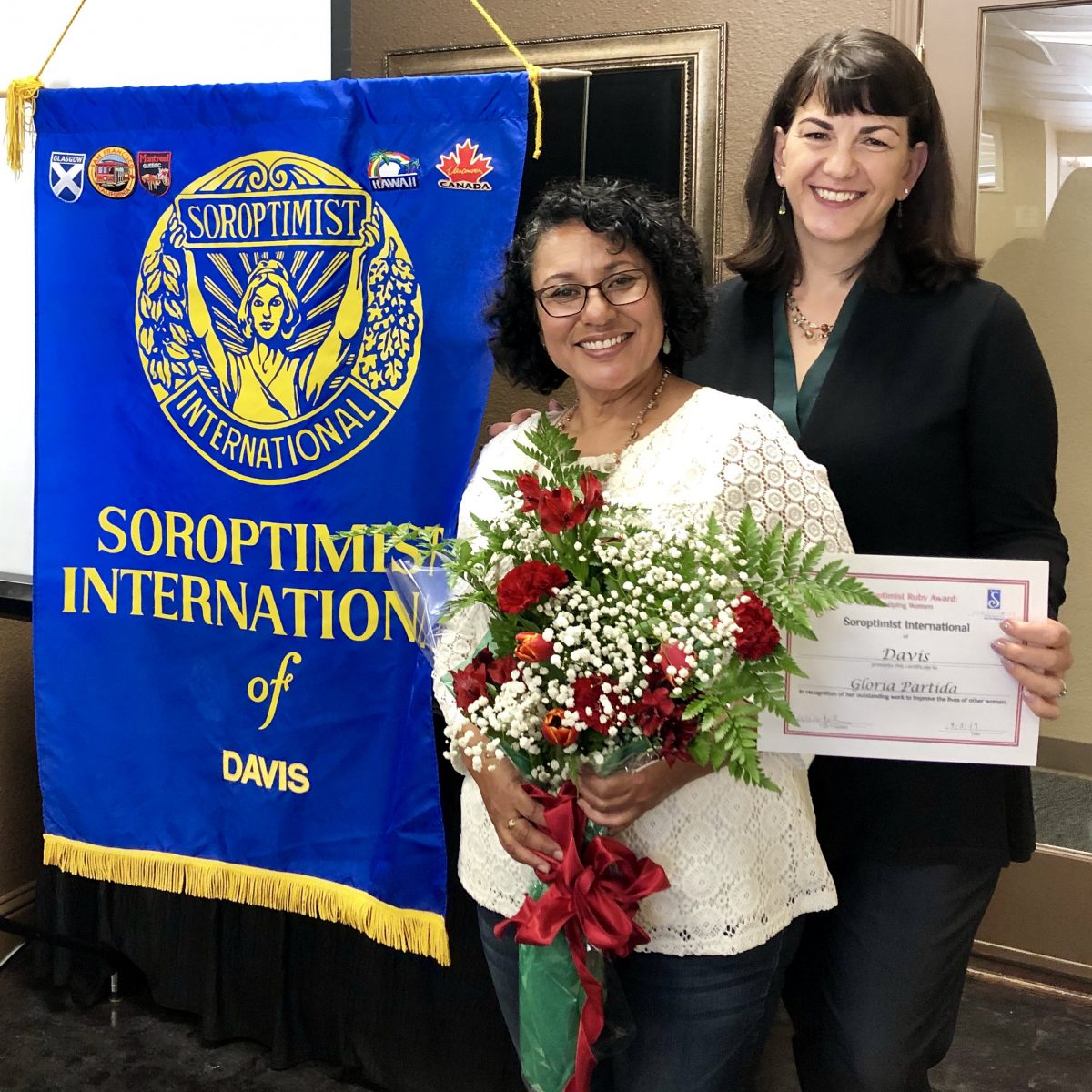 (From Press Release) – Soroptimist International of Davis presented Gloria Partida with its club Ruby Award at its April 3 meeting.

The Soroptimist Ruby Award honors women who, through their professional or personal efforts, are making extraordinary differences in the lives of women or girls. Honorees inspire and encourage other women and do work that has made a significant impact.

The service organization recognized Partida for being a strong female role model who is creating a more inclusive, kind community ­– in Davis and beyond.

After divorcing an abusive husband, the mom of three came to UC Davis in 1989. She soon became an advocate for disability rights for her youngest child, who has cerebral palsy.

After college graduation, she had a long career as a staff researcher at the UC Davis department of neurobiology, physiology and behavior, retiring in February. As lab manager, she advocated for bringing in young women – especially those of color – and encouraged them into the sciences. This role had her mentoring many female students and future doctors.

Little did she know her advocacy for women’s empowerment and for the disabled was training for another challenge. In 2013, her oldest child was brutally beaten in a hate crime that targeted him because of his sexual orientation. Soon after, she formed the Davis Phoenix Coalition, which hosts the Upstander Carnival for elementary-age students and the Davis Pride Festival to celebrate LBGTQ equality.

“I focus on anti-bullying because it’s a precursor to domestic violence,” Partida said. “It is the biggest barrier to success for a lot of women, specifically those who are under-resourced.”

That advocacy led to politics, and in 2018, she became the first the first Hispanic woman elected to the Davis City Council. As the top vote-getter, she steps in as mayor in 2020.

In nominating her for the award, SI Davis President Wendy Weitzel wrote, “She inspires women to be stronger mothers, scientists, advocates, role models and change-makers. She fights hate with a focused, calm demeanor. … She’s a testament to how leading with your heart ­– and by example – improves the lives of women and girls.”

Partida’s nomination went to Soroptimist International Sierra Nevada Region, to compete with others across Northern California and all of Nevada. The regional winner receives a $1,000 prize to the nonprofit of the winner’s choice, awarded April 28 in Reno.

Soroptimist International is a global service organization whose members volunteer to improve the lives of women and girls, through programs leading to social and economic empowerment. SI Davis raises money to support its core values of gender equality, empowerment, education, diversity and fellowship. Projects include mentoring girls at King High, helping single moms go to college, and working to end sex trafficking. Its major fundraiser is selling beer and wine on Wednesday evenings at the Davis Farmers Market.

SI Davis, chartered in 1954, celebrates its 65th anniversary on May 1. It has more than 50 members who meet at lunchtime on most Wednesdays at Davis Odd Fellows, and once a month at a local restaurant for an evening social. For more information on the club, visit sidavis.org or like its Facebook or Instagram pages: @SoroptimistDavis.