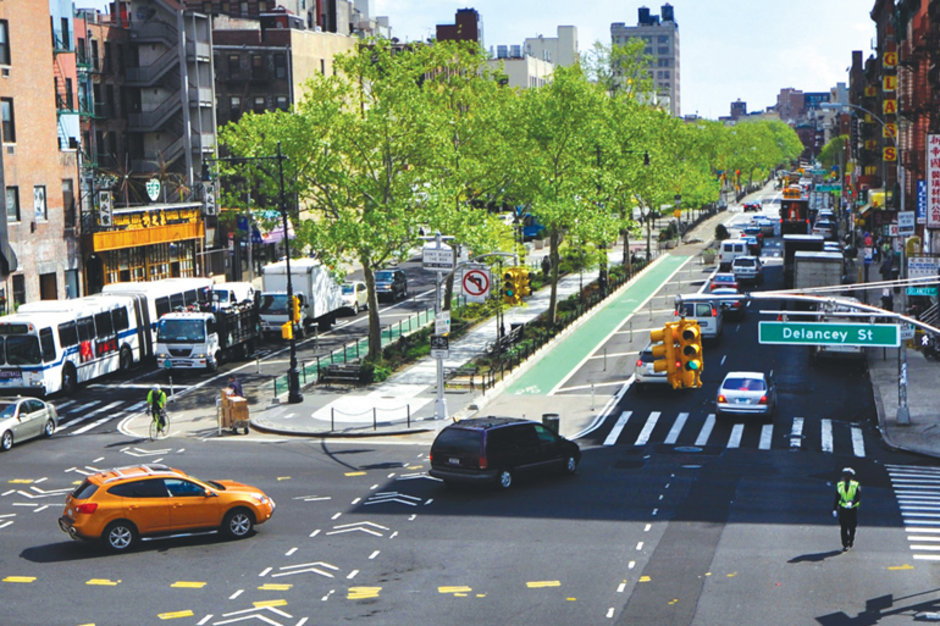 When I read the editorial by the Davis Enterprise, I was a bit disturbed by the implication of this statement: “The operative principle in all these projects seems to be that if only we make driving (or parking) inconvenient enough, then people will drive less, or slower, or somewhere else.”

Columnist Bob Dunning doubles down on this idea in his latest column.

Are there people in this community who think that way?  Absolutely.  We see it in the comments of some folks here on the Vanguard.  That’s fine, people are certainly entitled to their points of view.

But to imply without documented evidence that that was the thinking behind some of the projects and road designs in this community is to attribute to malice or intentionality what is better explained by a variety of other things – most notably a difference of opinion and perhaps a miscalculation.

What are they trying to do?  They are trying to allow other modes of transportation to safely access a street or corridor.

The re-design has enabled bikes and pedestrians to utilize the roadway along with motor vehicles.  When the road was designed, Steve Tracy, an advocate and consultant who helped design complete streets in other communities, explained to the Vanguard that the idea was to slow vehicles down but to allow them to get through the corridor more smoothly with fewer stops and less congestion.

All of this is part of a smart growth movement to create “complete streets.”  The goal of complete streets is not to take people out of automobiles or to make driving inconvenient, but rather to create safe access for all users of roadways: pedestrians, bicyclists, motorists and transit riders of all ages and abilities.

The idea is to make it easier to cross the street, walk to shops, and bicycle to work.

transportation planners and engineers to routinely design and operate the entire right of way to enable safe access for all users, regardless of age, ability, or mode of transportation. This means that every transportation project will make the street network better and safer for drivers, transit users, pedestrians, and bicyclists—making your town a better place to live.”

Look no further than the letter from Elaine Roberts Musser.  Those who know her, know she is not one who would buy into a concept to make it more difficult to drive an automobile.  On the contrary.

But she was a member of the transportation committee that devised the update to the Transportation Implementation Plan.

She explains: “One of the key tenets of this plan is what is called multi-modal share. That is to say, all modes of transportation need to be taken into account when planning for road improvements.”

In her letter she did note that some of the “loud voices” in the community came from the bicycling community, “who wanted much more emphasis on bicycle safety.”

Given the fact that this is considered one of the top bicycling communities in the nation, such a focus makes a lot of sense.

But, as she explains in her letter, the committee simply weighed that concern among many and she writes that “in the end, we wisely decided to make sure all modes of transportation were taken into account, with bicycle safety as only one, albeit very important, component of the plan.”

Now she believes that the consultants in the Mace Boulevard design did not really follow what the members of the Transportation Implementation Plan advocated – which is another story here – but the bottom line we can glean from her letter is that “all modes of transportation have to be taken into account when implementing changes to road configurations.”

Again I am not going deny that there are some voices in the community who do believe they can make it inconvenient enough so as to compel people to get out of their cars.  However, as I explained yesterday, the world is slowly changing how we approach transit and our roadways should accommodate those changes.

There are certainly a lot of roadways that are designed strictly for automobiles, which makes it very difficult for people to use other forms of transportation if they so choose.

A big driver here is safety.  In their publication, “Dangerous by Design 2019,” Smart Growth America and National Complete Street Coalition present data showing that over the decade between 2008 and 2017 “drivers struck and killed 49,340 people who were walking on streets all across the United States. That’s more than 13 people per day, or one person every hour and 46 minutes. It’s the equivalent of a jumbo jet full of people crashing—with no survivors—every single month.”

In fact, the number of people struck and killed while walking has increased over time, with 2016 and 2017 being the two highest years since 1990.

They note: “What this report shows is that our streets aren’t getting safer.”

The Enterprise concludes their editorial: “So we can have it all: a project that keeps the existing traffic flow while still improving access for bicycles and pedestrians. That should be our goal every time.”

I suspect that, if asked, the Davis City Council would say that was what they sought to do here.  You can argue there were some design flaws that they hope to fix, you can argue that circumstances which were unforeseen changed traffic patterns, but I don’t think you can argue that they intentionally tried to make it more difficult for drivers of automobiles to utilize the roadways.